My wife has known for many years that I have rather eclectic tastes in tourist destinations, but even with that history, she gave me a rather odd look when I suggested that we spend my day off by driving to Chatham to visit Virginia Uranium. When I pointed out how close Chatham is to our home in Forest, she started to come around. Once I promised that we would stop for lunch before coming home, she agreed to accompany me.

Virginia Uranium is a unique company; it is a locally-owned business in a formerly prosperous area that would like to provide approximately 325 jobs that will pay family sustaining wages (averaging in excess of $65,000 per year) for at least 30 and perhaps 60 years. The company owns a 119 million pound uranium deposit that is worth about $6 billion dollars at current world prices ($50 per pound). That is the largest single deposit in the United States and the seventh largest in the world.

Uranium has a large, growing international market. The world’s current fleet of 430 nuclear power plants consume about 40% more uranium each year than is currently produced by mining; the difference is coming out of gradually depleting inventories of material originally extracted for weapons programs for the Cold War. Though nuclear energy growth is not assured, there are about 65 new reactors under construction today with many more that are still in the planning stages.

Though the United States was once the world’s leading uranium producer and is still the world’s largest uranium consumer. We produce about 3% of the world’s total supply and depend on imported uranium to supply 92% of our needs. That shift from producer to consumer did not happen because we ran out of uranium; we still have enormous uranium resources that can be economically and safely mined.

Unfortunately, Virginia Uranium cannot use or sell its valuable property because uranium mining is not currently allowed by Virginia state law. Soon after the deposit was located in the late 1970s, the state passed a temporary moratorium because it did not have any existing regulations for uranium mining. The moratorium was designed to provide time to study the issue and to develop the necessary regulatory infrastructure. The studies recommending lifting the moratorium were completed in the early 1980s, at about the same time that the world uranium market collapsed and the price fell from more than $30 per pound to less than $10 per pound.

The owners decided to continue with their lives and wait for the uranium market to recover. That has taken a lot longer than expected, but the owners in this case can be patient. The uranium deposit is located under Coles Hill, a 3500 acre farm that has been owned and occupied by the same family for more than 200 years. Coles Hill used to produce tobacco; now it is the comfortable, scenic, and historically significant home for the family and several hundred well pastured cows.

June 8, 2012, day that my wife and I chose to visit Chatham and Virginia Uranium, was a gorgeous day for exploring Southside Virginia. The pastures and forest patches that cover the rolling hills of the Piedmont between Lynchburg and Chatham were intensely green due to plenty of recent rain. The air had that refreshingly clear quality of the day after a cold front came through and washed all of the pollen out.

When we first approached the Virginia Uranium (VUI) building, I thought that my Google map program had steered us wrong. (It has done that occasionally, by putting us on the wrong side of a shopping center or by directing us to the opposite side of the river from a large park.) The VUI is a nondescript metal building with construction that is typical of many small industrial businesses; but it is located at the end of a decidedly residential street that becomes progressively more narrow and then ends at a farm right next to Virginia Uranium’s building.

We located the building about 45 minutes earlier than my appointment, so we decided to explore Chatham.

We drove up and down US 29 business (Main Street) and out State Route 57 (Depot Street). We noticed a large, new sign for the local welcome center, but found out that the center has not yet opened. It will be housed in a carefully restored train station; we saw workers putting some of the finishing touches on the parking lot and grounds. We looked around and found our way into the building.

Though the Chatham downtown looked like it was several decades past its prime and contained several vacant buildings, there are several blocks of large, nicely landscaped, Victorian era homes at either end of the downtown part of Main Street. The area had seen some prosperous times from farming tobacco; some of the old money was still in circulation. Even after driving through what appeared to be every part of town and walking around the restored train station that is going to be the new visitor center, we only managed to kill a half and hour and arrived back at the Virginia Uranium building 15 minutes before my appointment.

The first thing that a visitor sees after entering the Virginia Uranium office is a large poster that mentions the value of uranium as a fuel and the potential employment that mining the Coles Hill deposit can bring to the area where it is located. As Patrick Wales, my contact at VUI pointed out, the company will, by definition be a local company that provides employment and revenue locally. It cannot move its uranium somewhere else.

The walls of the converted office building are covered with topographical maps of Virginia and charts of the deposit at Coles Hill. After the deposit was initially discovered, the company that made the discovery spent tens of millions of dollars to fully characterize the boundaries and depth of the deposit so there is no mystery about the available resource. I was particularly taken with a plexiglass model that showed the deposit in three dimensions; that really helped me to understand how it was going to be mined and why it was going to take 30-60 years to do the job correctly.

After an informative slide presentation, Patrick drove us out to the farm, which is about 10 minutes away from the office. Though I am aware of very large ranches in western states, it is quite rare for a single piece of property in the eastern US to cover 3500 acres (more than 5 square miles). The deposit itself lies beneath about 200 acres, but there is an enormous buffer between what would be industrialized for the mine and milling operations and any neighbor.

After driving for more than a mile from the property boundary over the dirt farm road, we got out of the car so that Patrick could show us how the deposit reaches all the way to the surface – which is what made it easy to find for the initial prospectors. Patrick pulled out his scintillometer and showed me the display, which was reading normal background of about 300-320 counts per minute. He walked along the road with the detector held close to the ground and we heard the variation in the audible clicks.

At one point, the clicks got so close together that the scintillometer provided a constant tone and the display indicated 4300 counts per minute. Here is a short video of Patrick explaining what he found.

While at the farm, Patrick, who holds a master of science in geology, explained the features of the land, and showed us the natural barriers that would prevent any material from leaving the farm. We talked about the possible impact of heavy equipment for creating the mine and the truck traffic that would be needed to move the product from the mine to the market. Though there is certainly going to be some impact during the construction phase of the project, Patrick noted that the planned extraction rate would require shipping just one tractor trailer load of product each week; one local dairy already ships two tractor trailer loads of milk every day. 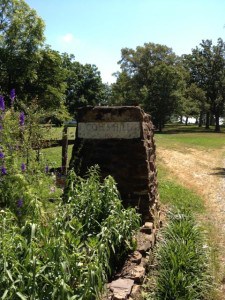 The fact that impressed my environmentally conscious wife the most was learning that the Coles family intends to remain in their historic home throughout the construction and operating phases of the project. The family members feel very strongly about historic and environmental preservation and intend to ensure that all necessary measures are taken to prevent permanent damage to their family farm. After visiting the company and the site of the deposit, I can see no reason why they should not be allowed to take full advantage of their private property, provide family wage jobs in an area where there are not many other opportunities for employment, and extract valuable fuel material that can help to power the US economy without producing any greenhouse gases.

The state of Virginia has formed a Uranium Working Group to “provide a scientific policy analysis to help assess whether the moratorium on uranium mining in the Commonwealth should be lifted, and if so, how best to do so”. That group is going to be holding a series of four public meetings during the next six months as they draft a statutory and conceptual regulatory framework.

The first of those meetings will be held on June 18, 2012 at 6:00 pm at the Chatham High School, 100 Cavalier Circle, Chatham, VA. It is already on my calendar; if you live in or near Lynchburg and are interested in carpooling, please contact me.

You can read more about the issue of uranium mining in Virginia at Uranium Working Group: Study Links.

Take this investor survey to join a network of pronuclear investors hosted by Nucleation Capital.