Despite the tens to hundreds of billions of dollars that have been spent by governments and nuclear plant operators in the wake of three core melt events at the six-unit Fukushima Daiichi nuclear power station, the most useful lessons available from the experience remain unlearned.

At Fukushima Daiichi, the robust, defense-in-depth approach used in nuclear power plant design, construction and operations protected the public from the effects of massive damage at the plant. A clear-eyed look at the physical results indicate there is little or no reason to conduct early evacuations. There is no need to force people to abandon their homes and communities for periods in excess of five years and counting. There is certainly no need to be so worried about the possibility of something else happening at another power plant to shut them all down — just in case.

Special interests benefit by such drastic overreactions, with a majority of the benefits accruing to the interests involved in supplying fuel to produce the electricity that shut down nuclear plants are not producing. In Japan’s case, the imported fuel bill since March 11, 2011 has been more than $200 billion above what it would have been had the operational reactors continued to reliably produce their emission free output.

That cost to the Japanese people has been a revenue windfall to the fuel supply chain participants. Another group of beneficiaries has been the owners of the well-connected contracting companies that have employed thousands of low wage workers to move good topsoil from the fields where it can do the most good into unsightly plastic bags. One more group of beneficiaries are those people who have been well compensated for doing nothing. Unlike the real victims of the earthquake and tsunami whose homes were destroyed, they were able to point to a deep-pockets entity as the root cause of their homelessness. It’s hard to cash a check from Mother Nature, but easy to cash one from Tepco.

Fukushima reminded us that nuclear power plants are not perfect; there can and will be occasional accidents. However, it provides a visible “theory to practice” showing that the consequences of nuclear accidents can be limited to the plant boundaries with an effective, well-informed, calm response. The wild, fictional tales of widespread death and destruction that have been spun over the years are about as real as those that accompany a grade B horror movie.

Of course, implementing the lesson that nuclear plant events require mature, informed, rational corrective action is much easier said — or written — than done.

Around the world, people have been taught that the proper response to an event — almost any event — at a nuclear power station is to pack up the station wagon, grab the kids from school, and flee. After all, that is the response that happens in the movies and in one or two real life events that strangely resembled movie depictions. Experience from three different events — TMI, Chernobyl and Fukushima — with detailed post accident analysis available shows that the opposite is true; the best response is to remain in place, take a few simple precautions, and then go on with life.

Government leaders may claim that the public is so terribly frightened that they feel compelled to “do something,” but that attitude abandons the responsibility that accompanies the decision to accept a leadership position.

I might be oversimplifying here, but the problem is that we’ve collectively lost all sense of perspective associated with the words “contaminated” and “radiation” in the event of a nuclear accident. It is as if people believed that the phrase “that person has money” applies with equal emphasis to anyone with money, ranging from a panhandler with two nickels rubbing together in his pocket all the way to the opulence of the Saudi royal family, the Rockefellers, the Kochs, Bill Gates and Warren Buffett.

There are many powers of ten difference between having enough money to enjoy power and comfort and simply having a few coins. In the same way, there are many orders of magnitude between the kind of radiation dose that can cause harm, the dose that might provide a slight decrease in long term health, and the dose where the only effects that can be measured turn out to be somewhat beneficial to overall health.

Jim Conca published an excellent piece on Forbes titled After Five Years, What Is The Cost Of Fukushima? that attempts to tally up the costs associated with the Fukushima Frenzy. Here is how he starts that piece.

The disaster at the Fukushima Daiichi Power Plant following the devastating tsunami in Japan on the 11th of March in 2011 has proven costly in many ways – politically, economically and emotionally. Strangely, the costs that never materialized were the most feared, those of radiation-induced cancer and death. No radiological health effects have yet to result from the Fukushima disaster – neither cancers, deaths nor radiation sickness – although the WHO models indicate a slight increase is statistically possible. No one received enough dose, even the 20,000 workers who have worked tirelessly to recover from this event.

Though his article is well documented and worth reading and sharing, I had to respond to the following section.

By March 13th, 150,000 people were ordered to evacuate from within 20 kilometers of the nuclear plant. This was very effective in preventing any and all radiation-induced health-effects to the public thus far.

You see, I believe that the reason that international bodies have made such statements about the evacuation’s efficacy is that they are too polite or diplomatic to say that it was not needed. Not only did it cause a great deal of expense, but it cause some immediate injuries and early deaths among hospital patients who shouldn’t have been moved and it has created long term negative health effects from stress, uncertainty and distrust.

Here is the comment I contributed to the Forbes discussion:

My understanding is that the public would not have experienced measurable ill effects from radiation even if they had never evacuated.

The doses were too small and the isotopes of concern short lived.

Even if we accept that evacuation was politically prudent, there is no excuse at all for having forced people to remain in temporary lodging for five years while their homes, farms and communities wasted away from a lack of human attention.

The tales of starving livestock and the images of abandoned buildings are being used by those who want to impose almost infinite costs on nuclear power plants in order to ensure that a Fukushima-like event “never happens here.”

In my opinion, a far more cost effective way to make sure that the negative impacts of forced relocation never happen anywhere else is to invest in efforts to build trustworthy knowledge about the actual health effects of low level radiation.

It is something to be understood, not something from which to flee in panic.

March 14, 2016, William Hollingworth at Japan Times – Fukushima evacuations were not worth the money, study says

March 11, 2016, Les Corrice at Fukushima Commentary – Fukushima at Five Years: Rampant Radiophobia Ham-strings Japan (Note: Will need to search or scroll after new blogs have been posted at this location.)

March 10, 2016, Will Davis at Atomic Power Review – Five Years From Fukushima: Where Are We Now?

President Obama should task John Richardson with a mission similar to the one that President Dwight Eisenhower gave Hyman G. Rickover. Richardson is the current leader of Naval Reactors (NR), the organization that Rickover built. If directed, NR could begin a new assignment to show others how to manufacture complete nuclear fission power systems starting…

One of the more powerful concepts that I studied in college was called “groupthink.” The curriculum developers in the history department at the US Naval Academy thought it was important for people in training to become leaders in the US Navy learn to seek counsel and advice from as broad a range of sources as… 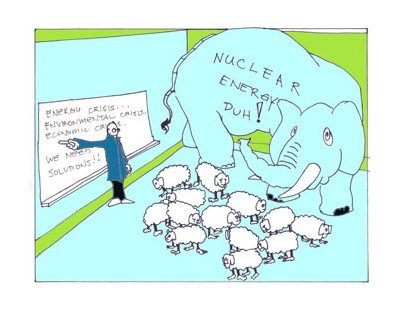 The Nuclear Energy Innovation and Modernization Act (NEIMA), S. 512, is a draft bill reported out of the Senate Environmental and Public Works Committee on March 22 that directs both the U.S. Nuclear Regulatory Commission and U.S. Department of Energy to make significant changes in the way they treat nuclear energy technology development. While it…