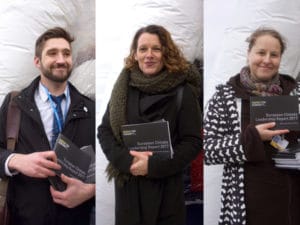 This episode of the Atomic Show is a conversation among five clean energy advocates who attended the COP with the goal of sharing what they know about the ways that nuclear energy can help reduce global emissions while also providing a growing amount of reliable power.

With more power, more people will have a pathway to prosperity.

Guests on the show include:
Kirsty Gogan, a co-founder and the current Executive Director of Energy for Humanity, an NGO based in London that is focused on abundant clean energy
Dr. Ben Heard, founder and Executive Director of Bright New World, an NGO based in Adelaide, South Australia. Bright New World is aiming for an improved world powered by energy that is plentiful, clean and affordable.
Eric Meyer, Founder and the Executive Director of Generation Atomic.
Wolfgang Denk, a campaigner for Energy for Humanity
Iida Ruishalme, author of the blog Thoughtscapism, who has recently become an increasingly active nuclear advocate based on her own personal journey through the available information. She is a member of the Ecomodernist Society of Finland.

Getting this geographically dispersed group together proved to be a bit of a challenge, but Ben was gracious enough to agree to participate even though we began recording at 1:30 am Adelaide time.

Kirsty kicks off the conversation with a summary of the official rejection of the World Nuclear Association’s offer to spend nearly $70,000 for a Gold Sponsorship of the Sustainable Innovation Forum (SiF) a business-focused event that occurs alongside the COP. Ben described the way that atomic advocates decided to respond to that decision and use it as a rallying point for increased dedication to effective communications.

Iida provides a moving description of how she and Eric Meyer openly infiltrated an antinuclear gathering. They received a rather harsh reception in response to their attempts to communicate. A more detailed version of the story is posted on Iida’s blog.

During the show, Eric provides us with an operatic highlight with the chorus of an original pronuclear song.

In contrast to the negative manner in which nuclear advocates were treated by officials and people who were part of organized efforts to silence nuclear information, each of show participants were able to share stories about positive encounters with more curious and open-minded attendees at the event.

The stories that the group share about their experiences deserve a close listen and probably some follow-up action.

Included among the actions will be an increasingly assertive effort by people that favor nuclear energy to make ourselves heard in peaceful and calm ways. It promotes our cause to be able to respond with grace and creative genius when others resort to pushing and shoving.

Near the end of the show, I issued a call to action for people to make financial contributions to the organizations represented on the call so that they can begin accumulating the resources required for an even larger effort to attend COP 24 in 2018.

Here are the donation links for each organization.
Energy for Humanity
Generation Atomic
Bright New World
Ecomodernist Society of Finland