It’s been quite a while since my last smoking gun post on Atomic Insights. It may be time to revive the series to remind nuclear energy advocates to follow the…
I have recently been introduced to a fascinating energy industry information source called European Energy Review. It is useful to find new perspectives on a topic as broad and as… 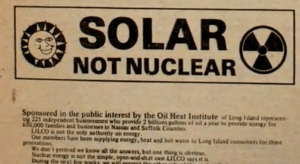 I came across an informative article in the Time South Pacific edition (on-line of course) titled Plugging in to Nuclear. The teaser summary of the article was enough to grab my attention

As some greens learn to love atomic power, Australia weighs whether to use its abundant uranium at home.

Not only is the entire article worth a read for a balanced look at how various factions view nuclear power, but it also includes a useful paragraph at the very end that fits into the “Smoking Gun” series here.

For those of you that are new to the Atomic Insights Blog or who have simply forgotten about the smoking gun articles, this series is an attempt to document evidence of one of my primary theories. Based on about fifteen years worth of research, a little bit of understanding of human nature from life and literature, and a sideline of involvement in competitive businesses, I have reached the conclusion that a large portion of the financial and political support that has made the anti-nuclear movement a success comes from its competitors in the fossil fuel industry or its beneficiaries.

Here is the “Smoking Gun” passage from Plugging in to Nuclear

Cost. The two sides differ on how to compare the costs of nuclear and other power. Nuclear plants are hugely expensive to build: an average-sized plant costs about $A2.5 billion. But they need very little fuel—uranium yields up to 1 million times as much energy as the same quantity of coal. The ansto study found that, taking waste management costs into account, nuclear power from an advanced plant “is cheaper than generating it from coal or a [clean coal] station.”

Read that paragraph again carefully. A study shows that a nuclear plant can produce electricity more cheaply than a coal plant. Coal is a huge industry in certain regions. A politician from one of those regions clearly states that he will not support a competitor to that huge industry.

My point in this series is to get people to “follow the money” and question the source or motivation of any anti-nuclear commentary that you find. There are plenty of sincere people who do not like nuclear power, but there are some very powerful people that have ulterior financial motives for their stance.

UBS Investment Bank holds a large portfolio of loans to companies involved in extracting natural gas using the combination of horizontal drilling and hydraulic fracturing. Because of the healthy fees associated with generating those loans initially, UBS, along with several other large investment banks, supported drilling programs for production that was not justified by the…

I came across an interesting saga yesterday. My introduction came from a May 14, 2015 opinion piece in the Wall Street Journal titled The Greens’ Back Door at the EPA. (Hint: If you don’t have a WSJ subscription, copy and paste the article title into the Google search engine. That should provide you a link…

Every once in a while I come across articles that directly support the notion that much of the energy source debate is really a marketing battle, though the stated topic might be “energy security”, “environmental concerns”, or “global warming”. To their great credit, most engineers and scientists that I know are very straightforward people; they…

One of the most famous battles against nuclear energy in the US, a struggle whose effects remain important to this day, was fought on Long Island. The saga involved nearly two decades of highly publicized effort marred by many failures in management and a well-organized opposition effort that successfully turned out thousands of people willing…

Alex Matthiessen, President of Riverkeeper, has written a letter to the editor of the New York Times with his suggestions for replacing the 2045 Megawatts of emission free electricity produced by the Indian Point nuclear power station. Because letters to the editor sections of commercial newspapers often are not reliably archived an available for future…