I have always tried to be clear when I talk about how fossil fuel interests have been responsible for much of the success of the organized anti-nuclear movement. Many people…
On February 2, 2012, the Sierra Club allowed a Time magazine blog to break a poorly kept “secret” whose existence had threatened to get out of hand. In a post…
Back on 14 January 2006, I posted a comment titled “Smoking gun – part 1” in which I told you that I would be on the look out for nuclear…

In the midst of the debate about whether or not the UK should include new nuclear power as one of its major options in a new energy strategy designed to lessen the island nation’s dependence on imported coal, oil and gas and to meet its obligations as a signatory of the Kyoto accord, the Scottish government has made a number of statements indicating that there was “no chance” that there would be any new nuclear power stations welcomed in their corner of the “slightly” United Kingdom. (See, for example, Our leaders blow hot and cold on energy published on January 12, 2007 on the Telegraph.co.uk web site.)

The headline reasons for this stance is that Scotland is a land with lots of wind, tidal and wave energy that is sufficient to meet its own needs without the “risk” associated with using atomic fission and storing the left overs.

Here is a story that provides a different motivation – apparently the government has been providing positive signals that it supports large subsidies aimed at reopening a flooded coal mine called Longannet in Fife. The story, titled Campaigners claim government positive over Longannet reopening qualifies as a smoking gun where active campaigners against nuclear power indicate that part of the reason for their opposition is that the have financial or political reasons for supporting fossil power instead.

The written text of the story might not include as direct a comment as I normally like, but the timing of the discussion and the contrast between “no chance” for nuclear and support for outmoded coal is hard to ignore.

On January 9, 2012, The Nicholas School of the Environment at Duke University held a hydrofracking workshop. The organizers invited a number of speakers from both industry and academia to discuss a contentious, but important energy issue from a variety of perspectives. You can read about the workshop on TheGreenGrok on a post titled Minds…

Dieter Helm’s The Carbon Crunch: How We’re Getting Climate Change Wrong–and How to Fix It has the potential to be an influential energy policy book, not just for the UK but for the rest of Europe and the United States. Helm has been making the rounds to promote the book and recently gave a concise…

I have some very engaged readers. Some of you even follow up if you send something interesting and I do not get around to sharing it with all of you. Daniel sent me a scan of an advertisement that appeared in the Courier-Mail out of Queensland, Australia in November 2007. it is a very straightforward…

Alex Matthiessen, President of Riverkeeper, has written a letter to the editor of the New York Times with his suggestions for replacing the 2045 Megawatts of emission free electricity produced by the Indian Point nuclear power station. Because letters to the editor sections of commercial newspapers often are not reliably archived an available for future… 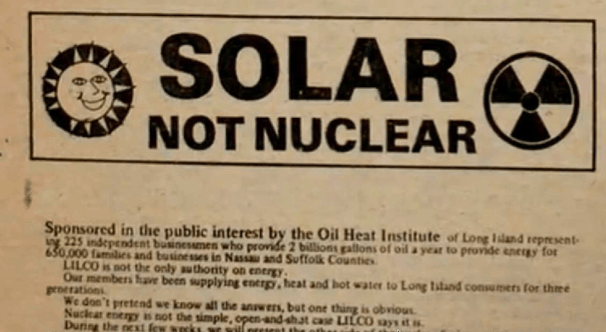 Conventional wisdom tells us that “Environmentalists” worried about one or more of the below complaints have influenced world opinion and encouraged the current negative investment perception that surrounds new nuclear power plants: Nuclear plants are not completely safe Nuclear energy technology leads to dispersal of nuclear weapons capability Nuclear energy plants are massive and lead…