The old “smoking” industries are not the only ones who have a direct financial incentive in shutting out the nuclear competition. Here is a quote from a March 6, 2009 article on Energy Daily titled Analysis: Nuclear vs. renewable in Germany:

In 2020 renewables are to satisfy 47 percent of Germany’s power mix — more than triple the share of today, which stands at 15 percent.

To achieve that goal, nuclear power plants need to be shut down, the industry claims.

“Sticking to the phaseout is a key prerequisite for continuing development of our sector. It’s our investment security,” Bjoern Klusmann, the head of a German renewable industry association, said Wednesday in Berlin.

Just in case you think of the renewable industry as a cottage industry full of people wearing pony tails and Birkenstocks, I highly recommend that you read Boomtown Bremerhaven: The Offshore Wind Industry Success Story, a fascinating article about the growing wind turbine industry in Bremerhaven, Germany. 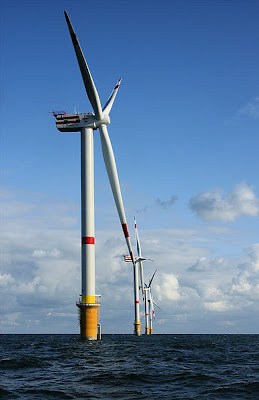 There is money to be made in building massive wind turbines and associated equipment and installing them in both on shore and off-shore locations, especially if there is adequate financing and government mandates. I am sure that there are a large number of talented engineers and skilled laborers involved in the manufacturing process that enables the production, transport, installation and maintenance of turbines installed on 185 meter tall towers several miles off shore. Those machines have 100 m long blades, operate in harsh conditions and require massive, variable speed reduction gears and precision generators.

Of course, the goal of an energy industry should not be to produce impressive technical marvels, but to produce useful energy that is affordable and has the lowest possible impact on the environment.

It looks like the nuclear industry is finally beginning to fight back with logic and rhetorical weapons of its own.

The head of German energy company RWE, Juergen Grossmann, said in an interview with a German business magazine that subsidies for renewables are a “support program for Russian gas,” calling wind power an unstable provider requiring gas-fired power plants that would have to supply base-load capacities.

His company would continue to build nuclear power stations outside of Germany, for example in Britain, he added.

As always, my point in bringing you these smoking gun stories is to work to undermine the “moral high ground” that has been assumed by many of the participants in the energy discussions. I have nothing against commercial enterprises working hard to sell their wares, and I fully recognize that one effective tool in marketing is to denigrate your competition. Those who battle nuclear power are often doing it for financial reasons that have little to do with providing the best possible energy choices and everything to do with providing choices that make the purveyors of other energy alternatives the most money.