On April 9, 2010, Jerry Taylor of the Cato Institute paid me the compliment of responding to a post that I labeled as a “smoking gun”. I gave the post…
I have recently been introduced to a fascinating energy industry information source called European Energy Review. It is useful to find new perspectives on a topic as broad and as… 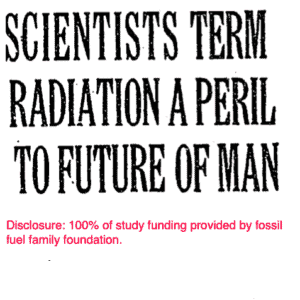 On December 8, 1953 President Eisenhower announced to the UN that the US knew how to harness atomic energy to produce useful power. He stated that the US was willing…

I came across an article on RosBusinessConsulting titled Russia floods global markets with O&G that supports my theory that at least some of more crafty segments of the world’s oil and gas providers recognize the return on investment (ROI) available to them from steady efforts to stoke irrational fears about the use of nuclear energy.

For example, this paragraph appears near the top of the article.

Experts warn that Russia’s reliance on mineral resource exports may backfire on the country, when the prices drop one day thus wreaking havoc on budget revenue. Thus far, luck has been on the country’s side as global developments have been pushing fuel prices up. The average price of Urals blend oil was $109.3 per barrel in 2011, up 39.8% from 2010. Oil prices rose sharply on the back of uprisings in the Arab world, the war in Libya as well as an earthquake in Japan, which destroyed the Fukushima nuclear power plant causing an environmental disaster and giving rise to serious misgivings about the safety of nuclear power, the most promising alternative to hydrocarbons nowadays.

I don’t believe in luck or in the use of the passive voice; it is clear that knowledgeable people can run the numbers and choose to use their influence to ensure that press coverage reinforces those “serious misgivings”. How many times has Apocalyptic Arnie (Gundersen) and his fear mongering associates appeared on Russia Today, aka RT, as well as on other ad supported media channels?

Russia is also smart enough about the dependence its export customers have on Gazprom’s pipeline gas to ensure that it is profitably priced with a contracted link to the market price of oil.

Geopolitical factors have been keeping oil price high in early 2012. The eventuality of sanctions on Iran and Syria enable analysts to forecast that oil prices will spike to $150 or even $200 per barrel. Gas prices pegged to oil prices are also set to soar.

Please note the prices in the above quote; Europeans are paying 3-4 times as much per unit of heat for natural gas as North American customers. That makes the German, Swiss, and Italian move away from nuclear energy even more questionably; they do not have the same “low carbon” alternative power supply option that we do here. No wonder the German environment minister proudly spoke about the opening of a new lignite (brown coal) fired power plant.

Perhaps there is a good reason why so many European industrial firms are relocating production facilities to lower power cost regions like Alabama and South Carolina where there are new nuclear plants under construction.

The energy strategy from the world’s chess playing capital is not a single dimensional focus on hobbling nuclear energy’s ability to compete for its customer base, but also includes efforts to stimulate and sustain conflicts in the political areas that are important to the oil and gas industry. Not all of those important areas are hydrocarbon supply basins; some, like Syria, Georgia, Pakistan, Afganistan and Ukraine host key segments of transportation pipelines. (For an entertaining, but scary, analysis of world pipeline politics, I highly recommend listening to NoAgenda show episode 426.

Here is the final quote that leads me to believe that the current government in Russia is skillfully playing the board in the “The Great Game” and hoping that no one notices its strategic efforts.

Meanwhile, Natural Resources Minister Yury Trutnev predicts that oil and gas resources will last for 100-150 years, after which the mankind (sic) will have to search for alternative resources.

Anyone who makes that prediction is trying to fool others into a false sense of complacency that includes ignoring other obvious issues with continuing to depend on hydrocarbon suppliers to fuel our modern society. If anyone disagrees with this being labeled as a smoking gun, please explain your logic.

Dan McSwain, a business columnist and investigative reporter for U-T San Diego, has published an article titled The secret decision to kill San Onofre nuke. McSwain estimates that consumers will be required to pay least $13.6 billion in additional costs as a result of the unplanned, early retirement. I think that calculation is low because…

If a U.S.-based researcher or reactor designer needs to irradiate fuel or material with fast neutrons for testing, their current options are extremely limited. No domestic test facility can provide enough fast neutrons to do anything more than slowly irradiate a small quantity of tiny samples. Anything more requires the full cooperation of either Russia…

I rarely, if ever, open email that is obviously part of a chain letter. I have never ever, passed them along to anyone else. However, this morning I received the following message that seems quite timely because if it was in effect, people like Harry Reid and Ed Markey would have never developed the clout…

The New York Times published an article on Sunday, June 26, 2011 titled Insiders Sound an Alarm Amid a Natural Gas Rush. The article quotes a number of emails from natural gas industry insiders, financial analysts that cover the gas industry and skeptical geologists to produce a number of questions about the long term viability…