I’m a progressive liberal who frequently listens to Democracy Now! That makes me a bit of an oddity because I am also fiercely pro-nuclear energy. It has numerous capabilities that should appeal to progressive thinkers; it is abundant, affordable, compact, reliable, and emission-free. Unfortunately, the catechism taught to hereditary or geographical liberals includes such talking points as “nuclear is bad,” “nuclear is scary,” “nuclear means bombs,” or “nuclear hurts the children.”

Perhaps the root cause of my odd status as a pro-nuclear progressive is that I grew up in a almost completely apolitical household run by an electrical engineer and an English teacher. By the time I was in the learning mode, my parents had rubbed off on each other, so both were rational thinkers who loved to read widely and experience the world without being limited by what they had been taught to think by others.

While listening to Democracy Now! on a morning walk yesterday, I heard a though-provoking interview with former Maryland governor Martin O’Malley. During the interview, embedded below, there was an interesting exchange during a segment titled Martin O’Malley: Climate Change Helped Spark Destabilization of Syria, Rise of Islamic State that made me wish I could have been in the studio with the ability to ask questions during the interview. (I get that feeling more and more often as I gain interviewing experience on the Atomic Show.)

Here is the question that O’Malley could start answering in an honest way that would capture attention, some criticism and, possible, a major new voting block. As an underdog who has not yet captured enough attention, he might be willing to to think hard about the risk/reward potential of this suggestion.

JUAN GONZÁLEZ: You hold many of these progressive positions, yet in the polls Bernie Sanders seems to be sucking up, supposedly, in the polls, all the support of the active Democratic Party progressives at this point. How would you differentiate yourself from Bernie Sanders? And what would you say to convince voters that you are a better alternative within the Democratic Party?

Just before Gonzales asked this question, O’Malley had described his position on a number of energy and environmental issues. He expressed opposition to the Keystone XL pipeline, Arctic oil drilling, and offshore drilling near the Chesapeake Bay. He expressed support for building the transmission infrastructure that might enable off-shore wind farms to supply power, for the Iran nuclear deal, and for solar energy. However, I heard a pro-nuclear “dog whisper” in the following statements that Juan Gonzales and Amy Goodman could not hear because of their entrenched acceptance of the antinuclear catechism they have been taught by liberal gurus like Ralph Nader for the past 48 years.

I am the first candidate in our party—and let us hope not the last—to advance a plan to move us to a 100 percent clean electric grid by 2050. As governor of my own state, we were one of the early states to join the Regional Greenhouse Gas Initiative of Northeastern states. We raised our renewable portfolio standard from 7 percent to 20 percent, passed a climate—a greenhouse gas reduction bill in our state. And I believe that this is the greatest business and job creation opportunity to come to the United States in a hundred years.

Please notice that O’Malley did not say “100 percent renewable electric grid” and that he specifically stated that the stretch goal his state had established for renewable (aka unreliable wind and solar) was 20 percent. Goodman, Gonzalez and many Democracy Now! listeners probably don’t realize that O’Malley’s phrase “clean electric grid” includes a healthy and growing contribution by nuclear energy.

That is one issue where he is a polar opposite of Bernie Sanders, who helped his home state shut down Vermont Yanke a well-run, carefully maintained nuclear power plant that produced enough emission-free electricity each year to supply 80% of what the state of Vermont consumed. Now that Vermont doesn’t have its operating nuclear plant, it has increased its dependence on natural gas, needs new transmission lines from Canada, and is installing industrial wind turbines on some of its formerly pristine mountain peaks.

Its neighboring states, which used to purchase a lot of Vermont Yankee’s power output, have seen substantial increases in the price of electricity.

Here is a short video clip from 2010 that features O’Malley expressing his support for nuclear energy in general and specifically for the Calvert Cliffs 3 project in Maryland.

Just in case the embedded video somehow disappears or changes location, here is the verbatim transcript of O’Malley’s 2010 statement on nuclear energy.

I’m very much in favor of nuclear energy and I believe that the sort of technology that is now being employed in Europe. By the French in particular is something that needs to come to the United States. Certainly over the short term I believe it holds a tremendous amount of promise. And I think we need to catch up; I think we’re way behind the ball on nuclear energy and I hope that we’ll have a third reactor that is modern, safe and state of the art in the foreseeable future in Maryland.

There have been numerous events in the five years since O’Malley made that statement. Calvert Cliffs 3 has been cancelled, the joint venture supporting its construction, Unistar Nuclear, is now virtually defunct, Exelon has purchased Constellation Energy which was the U.S. partner in the CC3 project and the Fukushima Frenzy has provided virulent antinuclear activists with a new event to fret about.

O’Malley’s pro-nuclear statement hasn’t been seen by many voters; it’s been on YouTube since 2010 and has a grand total of 53 views. It is quite possible — even probable — that he decided to distance himself from the nuclear energy issue as part of an attempt to appeal to where his advisors think Democratic Party voters stand.

It is a tactic worth reconsidering in light of the growing strength of the Ecomodernist Movement and the potential for O’Malley to attract substantial media attention by stimulating a discussion about an issue that is vitally important to the continued strength of the Democratic Party. Party leaders who disagree should do some historical research so they can recall that both Kennedy and Johnson were supportive of nuclear energy before Ralph Nader began attacking the technology.

Concerns about the climate are running into the very real challenge that people LIKE living a high energy lifestyle. The good news is that nuclear energy makes it possible to both reduce our impact on the environment while increasing our energetic living and expanding the good life to an ever growing number of people. That is progressive thinking as far as I am concerned.

Aside: When I point out that Ralph Nader is an Arab-American whose family-owned restaurant was a gathering place for other Arab-Americans, it has nothing to do with racism or bigotry, and everything to do with regional economic interests. There is no greater threat to the value of oil reserves — and the economic and political strength of the Middle East — than the prospect of abundant, emission-free nuclear energy. That is a fact that has been known in some circles since Arthur Eddington published a series of lectures titled New Pathways in Science in 1934. End Aside.

PS: I have some personal knowledge of Martin O’Malley; I lived in Annapolis, Maryland from 1977-1981, 1991-1993 and 1999-2010. He was elected as mayor of Baltimore, one of the nearby major cities, soon after I returned to the state in 1999 and as Governor in 2006. His reelection campaign in 2010 was in full swing when I retired and moved to Virginia. We keep close contact with our Annapolis friends and return at least five weekends every fall.

Though many of my friends complain about relatively high property taxes in Maryland, they also love living there. It is an attractive, well-maintained state with decent roads, a reasonably prosperous economy, good public universities, excellent sailing, a terrific service academy and a well-maintained nuclear power plant. There were improvements in Baltimore during O’Malley’s tenure as Mayor and in the state during his tenure as Governor.

Though there is a lot of time left before the first actual votes are cast in the 2016 Presidential election, at this point the most I will say that 80% of the other declared candidates from both parties would be worse for the country — from my point of view — than O’Malley.

On May 18, 2011, Senator Mitch McConnell exercised the privilege of being the senate minority leader to visit the Senate Appropriations Committee Subcommittee on Energy and Water while the committee was holding a hearing on the fiscal year 2012 budget for the Department of Energy. He asked Secretary Chu a number of pointed questions about…

Last week Ketan Joshi (@KetanJO) published a piece titled Nuclear power’s tense contradiction. Ketan is a thoughtful science and technology writer who earned a science degree (neuroscience and psychology) from Sydney University and has worked in the renewable energy industry. He is also deeply interested in politics and identifies with the left. His article is… 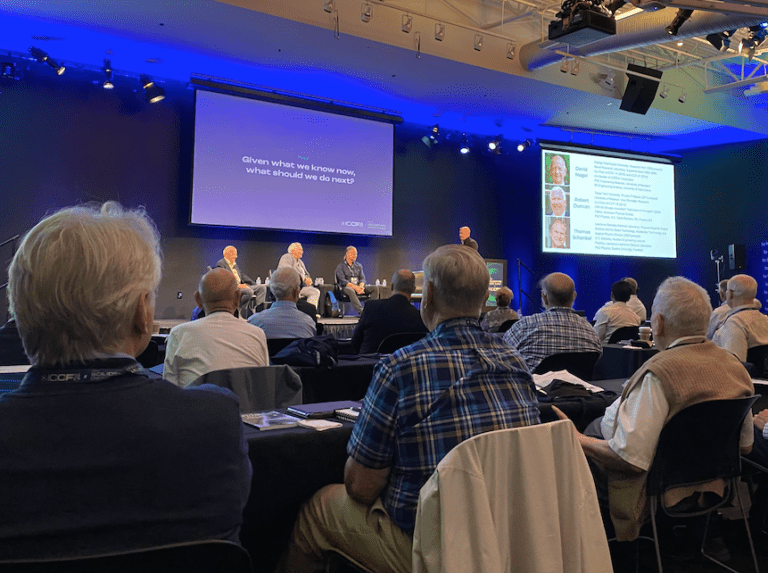 The 24th International Conference on Cold Fusion (ICCF24) was held at the lovely and spacious Computer History Museum in Mountain View, CA over four days in late July. As a venture investor looking at evaluating and investing in a wide range of advanced nuclear ventures, I was invited to participate and/or sponsor the event. While…

Update #2: (Posted at 1315 EST on November 11, 2012) Steve Aplin provided the following contribution from his insightful blog titled: Canadian Energy Issues Cities and power: revisiting Adam Smith’s Division of Labour Post blurb: Modern cities cannot function without electricity. That electricity is usually the product of other people from outside of the city,…