The fusion press release machine is still in business after all these years. I just completed reading an article in Forbes titled Reinventing Nuclear Power that provides some amazing details about the fusion experiments that will be taking place at the National Ignition Facility at the Lawrence Livermore National Laboratory sometime soon. 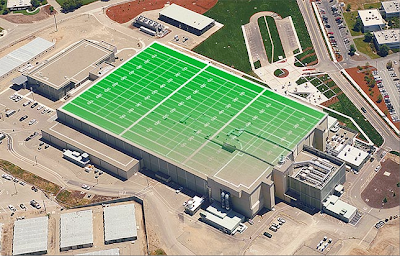 This facility, which encloses 192 of the world’s most powerful lasers in a three story tall building with a footprint the size of three football fields cost about $3.5 billion dollars and took 12 years to build. It was originally designed for conducting fusion experiments that could provide modeling data for weapons simulations that were needed as a result of the decision to stop physical testing of nuclear weapons. Apparently those experiments will not make full use of the device, and now the operators are planning some additional fusion experiments to keep their facility busy and justify their jobs.

The experiments will focus precisely timed beams from all 192 lasers on a gold wrapped pellet of liquid hydrogen isotopes – it is not clear which ones – “from sea water” to cause it to fuse and release energy in a brief – perhaps 20 millisecond – pulse. The total energy released will be less than 1% of the energy needed to fire the lasers. Here is a quote from the article:

The laser pulse, then, has to be shaped. The first light to hit must deliver only about 1% of full power. The power then oscillates, decreasing slightly before increasing in steps that last between 10 and 100 trillionths of a second. And all 192 lasers must produce the same shaped pulse in the same trillionths of a second. “Our conditions are ten times the temperature and ten times the density of the sun, and we’re getting there in billionths of a second,” says John Lindl, NIF’s chief scientist. “It’s not just making a flamethrower–it’s making a precise flamethrower.” 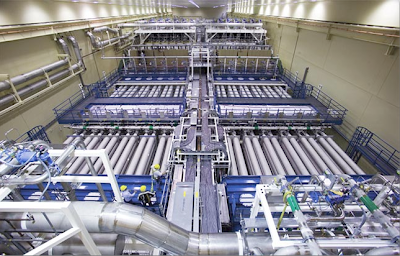 In a bow to the reality that it will probably never be possible for the fusion produced in such a way to make enough reliable power to even produce the electricity needed to supply the lasers, the scientists at the NIF have proposed a politically popular brand name – hybrid – to describe a system where they propose using a fission reactor to surround the fusion tablets and make use of all of the high energy fusion neutrons in a fission reactor that will achieve a high conversion ratio and produce several gigawatts of power. Needless to say, I am rather skeptical about the economics of such an imaginary project, but it apparently sounds good enough on a PowerPoint to impress journalists and budgeteers at DOE.

This is not the first story I have read recently about the NIF and its promise of energy someday far off in the future – after billions of dollars of public investment and career support for an untold number of experimenters who want to publish ever less useful articles about new discoveries enabled by the precision flamethrower.

According to Thomas Friedman, the author of a March 14, 2009 New York Times piece titled The Next Really Cool Thing, the NIF has already taken a major step on their planned path – they fired all 192 lasers at the same time at an empty chamber. That experiment occurred at 3:00 on Monday, March 9. I am not positive, but I am pretty sure that the time was carefully chosen based on electrical power availability – a story in the Sunday Times indicates that the combined power of the 192 beams is 500 trillion watts, 1,000 times the power of the US national grid. Obviously, there are some large capacitors involved that can be charged up to allow that kind of instantaneous power blast.

(Update/Correction (April 2, 2009): I have been schooled by several commenters that my “guess” about the timing of the event was not technically correct. The pulses get delivered over a tiny amount of time, so the total energy involved is not very large – one commenter stated that the cost of the energy used for each blast was about $5.00.

If that energy costs ten cents per kilowatt hour, that would mean each pulse requires 50 kilowatt-hours. Assuming that the 500 trillion watt power figure given in the news article was correct, it would take 0.36 microseconds to use up 50 kilowatt-hours of energy. Taking 50 kilowatt hours of energy and storing that up in capacitors over a period of time would have no effect on the power grid and would not need to be scheduled in the off hours. My apologies for the inaccuracy. I hope I did not mislead anyone. s/ Rod Adams End Update)

Though part of what seems to have impressed Friedman is the sheer size of the facility, that is part of what makes me extremely skeptical about its future applicability. There is such a long way to go before such a device could ever be packaged in an economical power plant – I cannot even imagine what improvements and inventions have not yet been addressed to make that a possibility. One major hurdle is that those massive lasers can only be fired at full power once per week according to the Forbes article.

The Sunday Times (London) story about the NIF experiments was titled Lasers to create mini sun in hunt for clean energy. That piece contained contained the following disturbing quote:

Last week leading scientists issued a plea to politicians to take action on climate change now or face decades of war and social unrest and a planet that becomes unrecognisable.

Mike Dunne, a director at RAL, believes the time has come to invest in nuclear fusion. “If the NIF succeeds, as we expect it to, I fully expect a dramatic public and political response,” he said.

“But to fully take advantage of its success, politicians must start investing in fusion now.

“We probably need around £10 billion internationally. That’s obviously a large sum but, to put it into context, the global energy market is worth around £1.4 trillion annually.”

That kind of comment makes my face get hot and my ears tingle. What in the world gives fusion scientists the right to associate their thirst for science knowledge with the world’s need for clean energy? They are offering NOTHING that offers any hope of even a bit of useful power within the next several decades, yet they want BILLIONS in research funds and want to tie up some of the brightest young minds on the planet for years worth of fruitless effort that does not provide safety, comfort or motive power for anyone.

I posted a comment on the Forbes site in response to their article, which at least expressed some amount of skepticism in their article summary:

A fusion-fission hybrid reactor could produce clean electricity and remove dangerous nuclear waste from
the planet. If it ever works.

Amazing! Here is a contrast for you. On December 2, 1942, in a simple construction of graphite and uranium that took a few weeks to stack up, Fermi started, controlled and stopped the first fission chain reaction. In December 1957 the first commercial fission plant in the US started producing 60 MW of useful electrical power. By 1993, fission power plants in the US were producing more electricity than all power plants in the country did in 1960. Fission works; fusion is a complex hallucination.

The reason fusion gets more public funding and breathless articles like this one is that it does not threaten the profits of the established energy industry. Why would they worry about something that is way out in the future? Fission, despite having some well known challenges, produces clean, safe, reliable, affordable power that competes and takes market share from coal, oil, and gas. It also does that without producing ANY emissions that cause acid rain, mercury poisoning of waterways, or global warming/climate change.

We need power, not frightfully expensive toys that give scientists and engineers something non threatening (to established energy interest) to do. The best way to “reinvent” nuclear power is to focus on continued improvements to fission that can already achieve much lower waste volumes and capture increased quantities of energy from the same volume of mined uranium or thorium.

Needless to say, I never expect to be invited to any fusion scientist sponsored parties at American Nuclear Society meetings.