One of the most famous battles against nuclear energy in the US, a struggle whose effects remain important to this day, was fought on Long Island. The saga involved nearly two decades of highly publicized effort marred by many failures in management and a well-organized opposition effort that successfully turned out thousands of people willing to march and hundreds willing to trespass and get arrested. Here are headlines from the June 4, 1979 issue of the New York Times:

Eventually, the plant was finally completed and obtained an operating license from the US Nuclear Regulatory Commission. The project cost nearly $6 Billion.However, the battle did not end there; the story got even worse as the state of New York and local politicians continued to fight. Some refused to sign off on the emergency response plans. Eventually, the state bought the plant for a $1, Long Island Lighting Company (LILCO) declared bankruptcy, and the plant never operated to produce or sell electricity. The ratepayers, however, are still paying elevated electricity prices in order to pay off the loans and in order to purchase the fuel oil and operate trash burning incinerators that supply the electricity that they still need to use.

The memory of the defeat of Shoreham and LILCO in the battle over an attempt to supply Long Island with clean, reliable fission power has not faded. It, along with memories of WPPS and Seabrook, are some of the primary reasons why the idea of investing in large nuclear energy projects is still viewed as a potential company killing bet.

The mythology about Shoreham is that it was a triumph of movement politics led by dedicated – if somewhat misguided – activists who were protecting their local environment. Even one of my favorite pro-nuclear writers – Gwyneth Cravens – participated in the marches and protests before she went on the mind-changing journey documented in her excellent book titled Power to Save the World: The Truth About Nuclear Energy. Harvey Wasserman, one of the organizers of the NoNukes concerts, the marketer of a concept called Solartopia, and a guy who is still on the lecture circuit trying to convince the world that there really were people who were killed at TMI, points to Shoreham as one of his life’s major victories – though he reluctantly gives some credit in his lectures to Senator Al D’Amato, a Republican politician from Long Island who also fought the plant.

What many people do not know about Shoreham is that at least some of the opposition literature used to scare people and fire up the troops was openly purchased by an organization called the Oil Heat Institute of Long Island. Here is a quote from one of a series of ads run by that group in the local paper during the long battle: 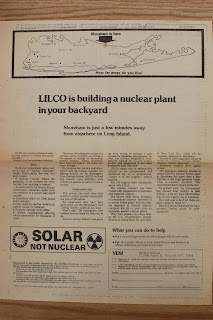 Sponsored in the public interest by the Oil Heat Institute of Long Island representing 225 independent businessmen who provide 2 billion gallons of oil a year to provide energy for 650,000 families and businesses in Nassau and Suffolk Counties.
LILCO is not the only authority on energy.
Our members have been supplying energy, heat and hot water to Long Island consumers for three generations.
We don’t pretend to know all the answers, but one thing is obvious.
Nuclear energy is not the simple, open-and-shut case that LILCO says it is.
During the next few weeks, we will present the other side of the nuclear fission question so everyone can decide for himself and make his feelings known before it is too late.
Paid for by the Oil Heat Institute of Long Island, 132 West Cherry St. Hicksville, N. Y. 11501

The ad is a full page spread with a map of the island with an atomic symbol at the plant location and the names of all of the villages and towns on the island. The headline in large, bold typeface reads: “LILCO is building a nuclear plant in your backyard: Shoreham is just a few minutes away from anywhere on Long Island.” The text of the ad includes most of the talking points that were frequently repeated during the first Nuclear Age; some of them still get used today. The ad claims that the insurance industry refuses to cover nuclear energy plants:

“Check your homeowners’ policy and you’ll find a “nuclear exclusion” clause. Every policy has one. For good reason.
A nuclear reactor offers the possibility of an accident far more terrible than anything in history.”

The ad then trots out the story of the three – out of an industry employing tens of thousands of people at the time – former General Electric employees and one former NRC staff member who began working in opposition to the technology.

“LILCO wants you to believe this subject is too complicated and technical for us to understand. “Leave it to the experts,” LILCO implies.
But the experts don’t necessarily agree with LILCO.
The nuclear industry has been rocked with resignations of engineers and technical experts.
The former chief safety evaluator of containment systems – the heart of a nuclear fission plant – and two other top engineers at General Electric resigned $30,000 a year jobs to campaign against nuclear plants.
They were joined a few days later by the U. S. Government’s project director at Indian River III, just north of New York City, which will be virtually identical to Shoreham.”

(Aside: 1. Containment systems are not the “heart” of nuclear fission plants. They are more like the suspenders worn by a guy who also has on a tight pants and a belt.
2. Four celebrated defections should not “rock” an industry employing tens of thousands of highly trained people, many of whom were world class scientists and engineers. In retrospect the phrasing in the ad is actually pretty accurate – this particular set of resignations did “rock” the industry in other ways by being used as a bludgeon for decades. The three former GE employees, Dale Bridenbaugh, Gregory Minor and Richard Hubbard built substantial careers as consultants out of their opposition, however principled it might have been in the beginning. The former NRC employee – Robert Pollard, has been called “the antinuclear movement’s indispensable man”. You can find his work easily these days using readily available search tools. End Aside.

The ad’s final paragraphs should be familiar – they are still a commonly heard rallying cry of the dedicated anti-nuclear opposition:

The insurance industry refuses to insure LILCO’s nuclear fission plant at Shoreham for more than a tiny fraction of the huge potential losses from a nuclear accident. The Government has to insure all the rest.
To protect itself, the Government has limited total liability to $560 million – a far cry from the $7 billion that its own experts say is minimum.
How safe can it be if all these experts refuse to touch it?
Now, how do you feel about having a nuclear fission plant in your backyard?

Here is the ad’s call to action:

What you can do to help

Here is the petition that the ad asks people to sign:

I, the undersigned, petition my representatives in Government to sponsor and actively support (1) a “Nuclear Responsibility Bill,” and (2) legislation to develop safe, cost-competitivce energy sources (conservation, solar, tidal, wind, etc.)

There is also a cute graphic on the ad that would make Harvey Wasserman – Mr. Solartopia – proud:

Please do not forget the source of all of this “information” about nuclear fission; it was openly purchased by the Oil Heat Institute of Long Island. It was apparently part of a series of similar ads and “information” pieces. Wonder why the ad sponsors did not boldly ask people to tell their representatives that they wanted to keep buying and burning oil?