On the morning of January 3rd, the operators of the Salem Nuclear Power Plant shut down unit 1 and reduced power from unit 2 because of a lack of cooling water flow. A combination of ice, high winds and low tide reduced the available water in the cooling water intakes to the point where the circulators (condenser pumps) could not maintain a sufficient flow rate. The weather conditions improved the next day. On the evening of Monday, January 4, plant operators restored unit 1 to full power and restarted unit 2, which they gradually restored to full power. Here is a graph of the reported power levels for the two units during the first week of January 2010. 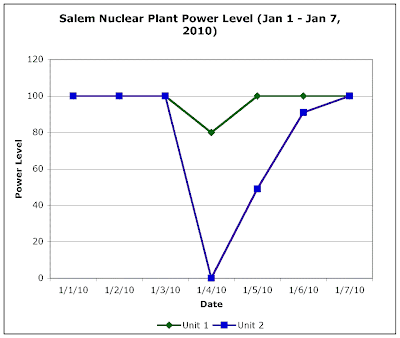 Note: I have not yet been able to determine if the above numbers represent the power output at a particular time or if they are an average for the day. I would appreciate links or comments from people who know how plants compute the power that they report in their daily reports to the NRC.

Here is the reason that I thought it was worth posting the above report and the graph. I had heard the news about the shutdown through a number of sources, including Google News alerts, Twitter, and a couple of blog posts. Since I had recently listened to episode 20 of the Fast Fission Podcast and heard John Wheeler talk about efforts by well funded anti-nuclear groups to force Oyster Creek to install cooling towers, I was concerned about the news that a nuclear plant in New Jersey had to shut down during a winter storm.

Several news reports about the event even made the point that Hope Creek Nuclear Plant, which is on the same site as Salem Units One and Two did not have to reduce power. In some of those reports, the author stated that the reason Hope Creek could continue to operate was that it had a cooling tower that was not affected by the water levels and ice in the river. I may be paranoid, but to my ears, that comment sounded like a subtle way of saying that cooling towers are better than river cooling and may even make economic sense if they allow plants to continue operating in bad weather conditions. (At least one of the sources that made that linkage is funded by the American Clean Skies Foundation, which is a natural gas marketing effort.)

I have been paying attention to the same sources that informed me about the ice induced nuclear plant shut down, but none of them informed me that the problem had been corrected and the plants restored to full power. I did several Google searches that I thought should have revealed articles about the current status, but none of them did. I then went to the NRC web site and looked for event notification reports to find the report discussing the shutdown. Here is the text of the report from January 4, which covers the New Year weekend from 31 December through 4 January.

“A manual trip of Salem Unit 2 was initiated due to a loss of 4 circulators due to an excessive uptake of river ice. Strong northwest winds, freezing temperatures and abnormally low tide levels contributed to the ice formation on the river. The operating crew entered EOP-TRIP-A, appropriately transitioned to EOP-TRIP-2 and stabilized the plant at no load conditions (MODE 3 Hot Stand-by).

“All rods fully inserted on the trip and all systems responded as designed with decay heat being removed via the Steam Dump system, with condenser vacuum maintained. All three AFW Pumps auto started due to low Steam Generator level due to closure of 21-23CN27, low pressure feed water heater inlet isolation valves. There were no other significant equipment challenges associated with the reactor trip.

“Salem Unit-2 is currently in mode 3. The Reactor Coolant System temperature is 547 [degrees] F with pressure at 2235 psig [NOT and NOP]. All ECCS and ESF Systems are available and no ECCS systems actuated during the event. No personnel injuries occurred as a result of the trip. [The Unit 2 reactor trip recovery is uncomplicated.].”

Unit 1 power was also reduced to 80%. Although the combination of strong northwest winds, freezing temperatures and an abnormally low tide contributed to the ice formation on the river, operators foresee no further complication due to the ice conditions.

The licensee has notified the NRC Resident Inspector and will notify the States of Delaware and New Jersey.

Unless I am missing something, there is no event report discussing the plant restart; perhaps there is no requirement to do that when the cause of the shutdown is well understood and is not a result of any equipment failure or operator error.

Finally, just as I was about to post this, I did one more search and looked through all of the articles that I could find on the topic. One source out of the 15 or so that I reviewed had published a follow-up article titled Area nuclear plants power up after Delaware river ice shut them down.

It seems to me that I should not have to look so hard to find out the answer to a simple question about a publicized event like a nuclear plant shutdown. Wouldn’t it be logical for a media outlet that takes the time or sets aside the space to notify the public that a nuclear plant has shutdown due to an unusual weather condition to follow up on that story and inform the public when it has started back up again, especially when the full shutdown only lasted about a day and a half – from Sunday morning to Monday evening?