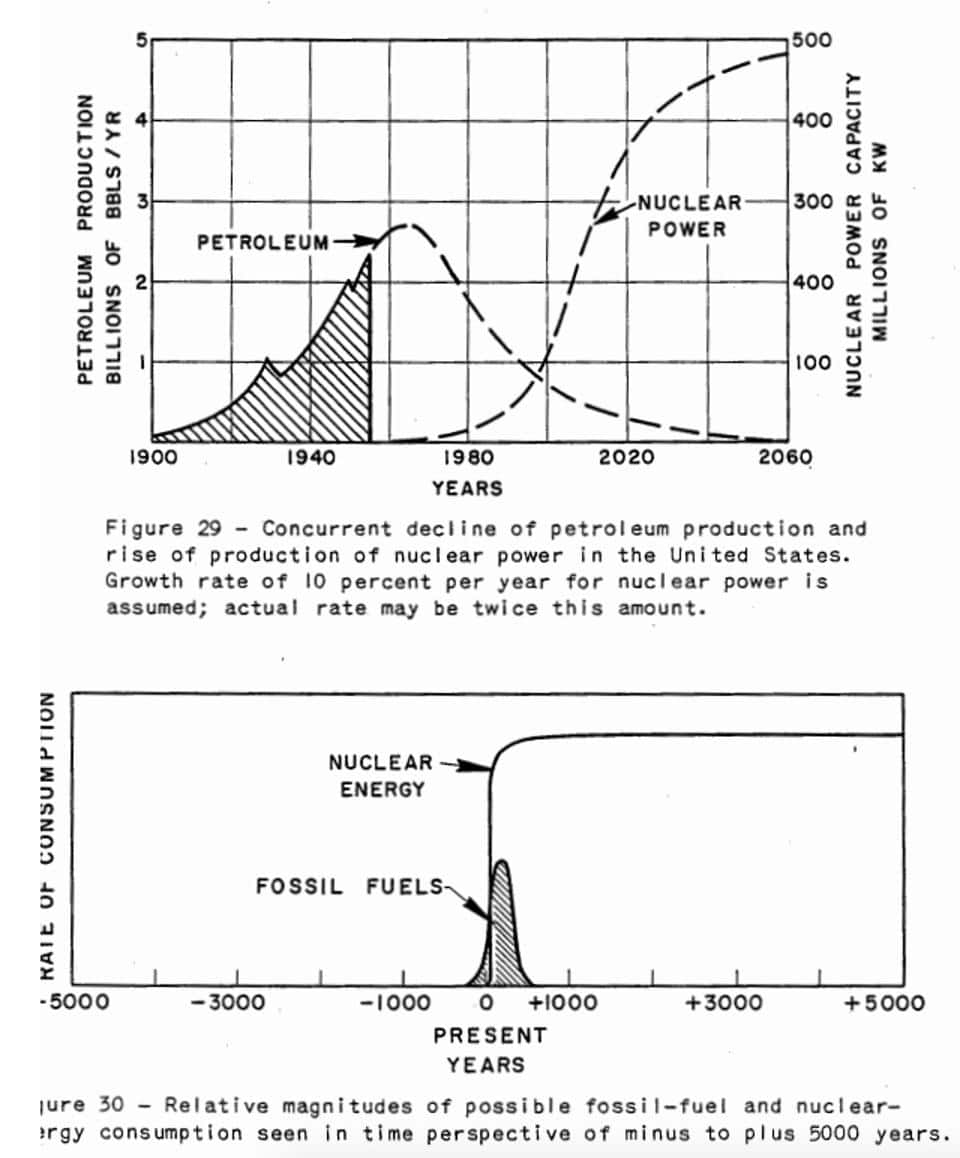 Trump’s plan for American energy strength is rightfully causing angst among people who believe that renewable energy is the inevitable path forward to reduce society’s dependence on fossil fuel. It is likely to cause even more fear among the people who are betting on fossil fuel to continue dominating the world’s economy and geopolitics.

Trump’s campaign statements and careful attention to Senate confirmation hearings for his nominees for EPA Administrator (Scott Pruitt) and Secretary of Energy (Rick Perry) lead me to the conclusion that we are headed for an era of cheap and abundant power. Trump and his key cabinet members have promised to work to remove artificially imposed barriers to developing increased supplies. They plan to replace those barriers with pragmatic solutions and regulations based on science and the rule of law.

Even if the brief summary of the plan fails to specifically mention nuclear energy or uranium, the general strategy plays directly into atomic energy’s strongest suit. It doesn’t have much of a political backing – yet – but its scientific and engineering potential is unmatched.

When it comes to artificially imposed barriers to developing indigenous raw material supplies, the relatively recent declaration preventing new claims for uranium mining in key locations is roughly equivalent to the federal government declaring the Permian Basin or the Marcellus Shale to be off limits for oil and gas development.

In another example, Gov. Perry stated his determination to come to a pragmatic and working solution to the “nuclear waste” bottleneck that has been used to constipate the nuclear industry since the early 1970s. He briefly, but importantly, told Illinois Senator Duckworth that he was interested in nuclear fuel recycling technologies developed at the Argonne National Lab. He also responded with enthusiastic support for small modular and advanced reactors.

Oklahoma Attorney General Scott Pruitt has made it clear that he intends to run an agency that bases its regulation on sound science and that remains within the limits of the authority granted by laws enacted by Congress. If he acts consistently with that stated position, one of his first wins might be in the office of Radiation and Indoor Air by directing an open and honest review of low dose radiation research that could change regulations based on the 1950s era assertion that all radiation is harmful to human health.

Most segments of the fossil fuel industry and its backers – both political and financial – will have a difficult period of financial adjustment in this abundant energy economy. Many people who have difficulties understanding the long term and unavoidable effects of the law of supply and demand may be confused by that statement.

Restrictions on developing new sources of energy are exactly what keeps fossil fuel so profitable and so geopolitically important. Without placing vast areas of potential resources off-limits and without an incredibly diverse set of artificial burdens placed on abundantly available energy from actinides like uranium, plutonium and thorium, prices for oil, natural gas, and coal would be several times lower than they are today.

It is often in the interest of existing suppliers to suggest and support rules that slow or stop their competitors. The most egregious examples of these anticompetitive actions often include grandfather clauses that exempts the existing suppliers from the most costly provisions of new regulations. As part of the regulatory sales job, the public is often told that these new rules are opposed by “the industry.” The truth is that there are many different points of view and interests at stake among all industries.

Removing artificial barriers to development would not automatically result in a dirtier environment; quite the opposite is more likely. It’s important to understand that even industrialists have families that appreciate clean air and clean water. Not only will laws designed to address real problems of pollution and its effects on the property and health rights of neighbors remain in place, but from the perspective of a systems engineer, pollution is visible evidence of economic inefficiency and waste.

For example, the “stuff” that pours out of the furnace of a coal stack is often non-combustible material that was dug out of the ground thousands of miles away from the power plant and then expensively transported to the power plant only to burden filters, grinders and conveyor belts and then stream out of the smokestack all while not providing any useful energy in return.

It’s possible and potentially lucrative to invest cheap, clean nuclear energy early in the fuel cycle to remove polluting impurities from coal before wastefully transporting those impurities and putting them irretrievably into the atmosphere, landfills or waterways. Some of the components of natural coal that cause major problems when left as impurities to be run through the cycle could be valuable raw materials if separated and purified in processing plants located in coal country.

Of course, the demand for coal as a power plant fuel will be governed by the overall competitiveness of the product when compared to other fuel sources. The customers in well-designed markets will not limit their purchasing criteria to the cost per unit of heat provided, but will also consider factors like the ability to stockpile fuel to avoid supply interruptions, the availability of appropriate equipment for burning the fuel, and the proximity of the resource to the customer.

Easily mined coal may even be a prospect for conversion into cleaner, more valuable and more readily transported liquid fuels through the addition of a bit of heat and hydrogen in coal to liquid processes that have been well understood since the early part of the 20th century.

An abundant energy economy will not result in increasing extreme extraction from remote locations. Those efforts can only be justified in markets where the fuel prices are high enough to support the very real and unavoidable costs of building new infrastructure, paying people to accept harsh living conditions and fighting against the elements that kept the area remote and pristine in the first place.

Instead, very low energy prices will encourage efficient use of existing infrastructure, deeper drilling in already developed resource areas, and efforts to take advantage of very low cost, easily transported and stockpiled fuels – like uranium, plutonium and thorium. Low prices will increase demand, but that is not a bad thing if the demand is supplied by clean and readily available fuel sources.

Another way to look at energy conservation is that it is the avoidance of work that could be accomplished if the energy was used. Conserving energy when we know that E=MC^2 with both M and C as large numbers is about as important as conserving bits in a gigabyte economy.

“All of the above” policies that are honestly aimed at making energy abundant so that it can be used to drive a vigorous, manufacturing economy can produce ever increasing wealth among the vast majority of its participants. The eventual and almost inevitable result should be a sustainable transition to cheap, abundant, emission-free uranium, plutonium and thorium.

That achievement will be a boon to lovers of clean air, clean water, and prosperous people. The possibility that this vision might come to pass is a scary prospect for those who continue to bet their wealth, power and careers on the assumption that the hydrocarbon economy will never end or on the myth that unreliables can do it all.

A version of the above was first published on Forbes.com under the same headline used here.

The best chance for humans to avert the worst risks of both accessible fossil fuel depletion and global climate change is for people who generally agree on those risks to begin working together to improve our ability to use nuclear energy. That will mean that both nuclear energy advocates and antinuclear environmentalists must recognize that…

As an undergraduate, I was trained to read between the lines and to interpret the words on the page in context with the author’s background and intent. With that in mind, I see an interesting marketing plan in between the following words from page 31 of ExxonMobil’s 2012 The Outlook for Energy: A View to…

Platts Energy Week recently aired a short segment discussing a topic that I was dimly aware of, but had not taken the time to pursue. According to Platts, natural gas market analysts are discussing the overall impact of the expiration of something called “held by production leases”. Platts’s explanation piqued my interest, but the presenter’s…

There is an old story that goes something like this. An inventor once came up with a revolutionary carburetor so effective that it enabled a typical American car to travel 100 miles on a single gallon of gasoline. The carburetor never made it to the market because “Big Oil Companies” purchased the patent on the…

On August 13, 2011, I braved the 13.5 hour time difference between Adelaide, South Australia and Lynchburg, VA to record an interview with Ben Heard, the force behind Decarbonise SA and Dr. Barry Brook, the well respected climate scientist who blogs at Brave New Climate. Aside: I used the phrase “braved the time difference” because…

On February 23, 2016, the UCLA Institute of the Environment and Sustainability hosted a debate on following proposition: Is California’s 100% Renewable Strategy Globally Viable? The debate format was a two on two with a moderator. On the side defending the viability of the strategy, Mark Z. Jacobson, the Stanford professor and energy system model…