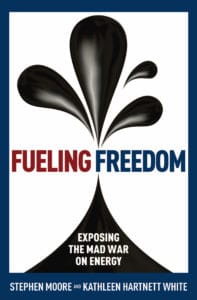 Some people who are not well versed in human history believe that fossil fuels are inherently evil, costly and harmful to human health. They ignore the side of the accounting ledger that documents the incredibly beneficial effects concentrated fuels have provided to overall human freedom, happiness, self actualization and reduction of dependence on nature.

Those benefits, however, have not been universally or equitably shared.

Kathleen Hartnett-White, one of the co-authors of Fueling Freedom: Exposing the Mad War on Energy, is fully aware of the beneficial effects of hydrocarbon extraction and use as a fuel to empower major portions of the human population. She joined me on July 6th for a spirited discussion about the importance of abundant energy that can be converted to reliable, focused power.

We talked about the ways that concentrated energy sources have given people some of the comforts, nutritional options, free time and freedom of movement that used to be only available to the very thin slice of the population that owned or controlled both beasts of burden and large numbers of other human beings.

Hartnett-White described the way that the shale revolution in both natural gas and oil has changed the world’s available energy balance and altered people’s assumptions about the future availability of conventional fuel supplies. We disagreed a little in our view of the sustainability of that revolution and its need for substantially higher prices to keep it viable.

We talked about the way that some people believe that the risks from climate change are so dramatic that they require human society to depower and devolve back into a less free, less mobile, less comfortable and less prosperous mode of living.

As a project of the Texas Public Policy Foundation, the Fueling Freedom Project is unabashedly aimed at changing the public conversation about energy from one that seeks to keep fossil fuels away from people into one that seeks to continue intelligent use of concentrated fuel resources as a way to improve the human condition.

Hartnett-White noted that the way most climate change activists treat nuclear energy provides evidence that their primary motivation is to depower the people rather than to reduce CO2 production. As she noted, if reducing risks from an atmospheric build up of CO2 was their primary concern, they would rethink their stubborn opposition to nuclear energy. Instead, they promote unreliable and uncontrollable sources of power like the wind and the sun even while fully recognizing that those sources are incapable of providing the same quantity and quality of power that people purchase today.

It’s nearly impossible to find an advocate of a 100% renewable energy supply system that does not begin the conversation by stating that their goals cannot be reached without a drastic reduction in power consumption. Mark Jacobson’s oft touted “solutions project” prescriptions rest on the assumption that we already use about 40% more energy than we should use in 2050. Here’s links to two example states in the US, Virginia (42%) and Florida (43%). Even more egregiously, the Solutions Project expects the same kinds of reduction in energy consumption in countries like India (43%) where enormous swaths of the population don’t use any commercial quantities of fuel or power.

Jacobson’s team at the Solutions Project plans for success in supplying people’s needs and wants by telling customers they need to learn to do without power.

My own position on energy and empowerment is fairly close to the one expressed by Harnett-White and Alex Epstein, the author of The Moral Case for Fossil Fuel and a previous guest on the Atomic Show.

While both of those writers acknowledge the value of nuclear energy as a concentrated fuel source, they are both relatively unaware of the unrealized potential of fission technology. They both seem to accept the current state of regulations and immaturity of the manufacturing and construction capabilities as a given. I see them as temporary limitations that could be drastically altered. The potential has some similarity with the way that the combination of hydraulic fracturing, detailed geological data and horizontal drilling have revolutionized our perception of the available oil and gas resources in the United States.

I accept the fact that steadily increasing the CO2 concentration of the atmosphere is dangerous and is altering Earth’s climate in unpredictable ways while also changing ocean chemistry in ways that will stress a wide variety of aquatic life.

However, the oft stated goal of achieving zero human CO2 emissions is unreachable. Instead, we should be striving to reach a quasi steady state concentration by replacing as much fossil fuel use as is reasonably achievable by a rapidly expanding fission technology base. That is a path toward both a livable planet and a prosperous, creative human population with a growing majority of people that are able to take full advantage of its amazing features and comforts.

Your comments on this show are, as always, welcome and encouraged.