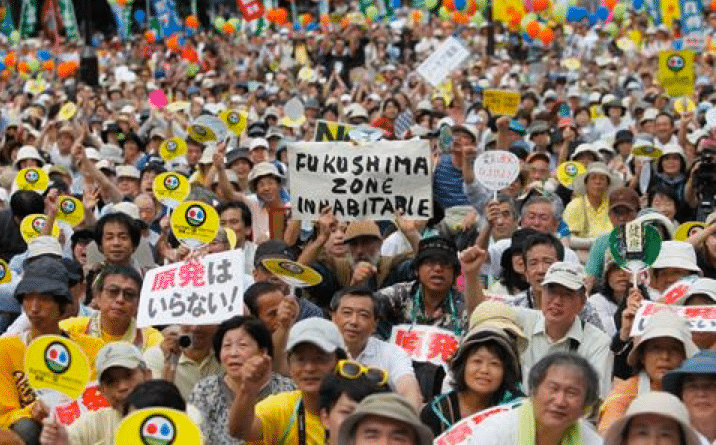 South Korea, Japan and Taiwan, three historically large markets for uranium and fuel cycle services, have been under siege by organized antinuclear opponents who have made the most from Fukushima to rally public support for their efforts.

To paraphrase a cliché, nuclear energy opponents did not let an attention-getting crisis go to waste. As a result of the traditional reluctance by nuclear energy supporters to speak up, the antis have been largely unopposed.

From its recently opened office in east Asia, Greenpeace International has issued a torrent of news releases and messages designed to stoke fear and distrust. They’ve sponsored widespread screenings for a disaster movie about a fictional event at a nuclear plant.

Here is a sample quote from a March 2017 (fundraising?) article on Greenpeace’s web site:

“The 2011 Fukushima Daiichi nuclear catastrophe may feel like ancient history in a world constantly bombarded with news of another tragedy or disaster. But for those who were impacted by the worst nuclear disaster in a generation, the crisis is far from over. And it is women and children that have borne the brunt of human rights violations resulting from it, both in the immediate aftermath and as a result of the Japan government’s nuclear resettlement policy.”

So far, their efforts have succeeded, probably beyond their initial hopes and goals.

Japan has about 40 operational reactors that have not operated since 2011.

Three of Taiwan’s six reactors have been shutdown for an indefinite period of time and the country passed a law in January mandating a nuclear-free grid by 2025.

South Korea elected a president in July who pledged to halt new reactor construction, to prevent license renewals and to phase out nuclear energy completely.

Each of the nations have nuclear plant construction projects that are currently stalled by government direction.

There are reasons to hope that the war is not lost, even though the battle toll has been quite severe with the good guys on the losing side most of the time.

With a moderate investment in a well-designed strategic marketing campaign, the fuel cycle industry has an opportunity to rebuild a substantial customer base. Success in that effort may sway hearts and minds outside of Asia.

Atomic Insights does not consume your bandwidth or degrade your experience by running ads.

We encourage everyone to read our stories and discuss them civilly in our moderated forum.

We need your support to enable us to continue to adhere to these policies.

Please become one of the generous readers who voluntarily helps to cover costs and provide resources for improved coverage. Click below to pay via PayPal or most major credit cards.

The 471-member panel decided, with a vote tally of 60% in favor of continuing and 40% supporting the halt, that the projects should be finished and operated.

It did not, however, provide a rousing endorsement for nuclear energy. A small majority of the members indicated that they supported the plan to gradually phase it out.

But those who supported continuing were convinced that it would be better for the country to complete projects for new reactors for which components had already been purchased and $2 billion had already been spent or committed.
Members accepted evidence that finishing the construction projects would put several thousand people back to work and mitigate the imposed economic harm to the host community.

Ulsan, the host community, had already made investments in infrastructure to support the facility and the construction work force. Its businesses and tax base had been significantly damaged by the abrupt work stoppage.

Korean opposition to nuclear energy continues to be politically strong. It seems to be relatively free to use emotional arguments without sufficiently being challenged by similarly framed arguments in favor of nuclear energy as the cleanest, most abundant, most affordable and safest available option.

While accepting the panel’s recommendation to complete the two Shin Kori units, President Moon reiterated his promise to his political base that he remains committed to shifting the electricity system to consume more natural gas and build more renewables.

Attention Getting Warning In Taiwan

Like South Korea, Taiwan is a small, resource-poor, isolated, export-dependent nation that logically invested in nuclear energy. It has three two-unit nuclear plants and a fourth under construction.

Three of the six operational reactors are currently closed for political reasons, while the new plant construction project has been halted since 2014 even though nearly complete. Nuclear opponents feel that they have a working majority of support from the public and plan to press forward with a complete exit from the technology by 2025.

In August, Taiwan’s public received a warning about the economic risk associated with an unbalanced and inadequately resilient grid.

A technician working on the gas supply system made an error that interrupted the flow of fuel to a large, six-unit natural gas fired station. The interruption lasted only two minutes, but it tripped all six generators and instigated a widespread power outage affecting more than 6 million customers. That outage lasted for more than five hours.

That event is an example of expensively identifying a fragile system with a single point failure vulnerability.

A series of somewhat less dramatic events have raised public awareness about the fragility of the island nation’s power system and have caused some to question the logic behind the policy of closing operational nuclear units.

“There used to be a tug-of-war between pro and anti-nuclear groups, but the anti-nuclear camp has gained favor ever since the 2011 Fukushima Daiichi disaster in Japan, former Environmental Protection Administration minister Wei Kuo-yen said in the first panel discussion with Shellenberger.” (Emphasis added)

The recent power supply disruptions offer pronuclear forces a timely opportunity to make its case to a public that may be especially willing to listen. A public and a business community faced with the negative impacts of power shortages should be encouraged to join the pronuclear forces and powerfully drag the rope in the right direction.

Several independent pronuclear activists are doing what they can to help Koreans, Japanese and Taiwanese understand that their nations need nuclear in order to grow and prosper.

Their efforts could be far more successful if aligned–but not co-ordinated with–a marketing campaign designed to sell nuclear energy to the public as a superior wealth and health enhancing power source.

When the citizens and businesses of the three Asian tigers recognize what they are being asked to sacrifice in order to appease a vocal minority, the demand for uranium and fuel cycle services should recover rather quickly.

Note: A version of the above was first published in Fuel Cycle Week, an industry newsletter that focused on the front end of the nuclear industry.

If I lived in New York City, I would be campaigning against the installation of large, high pressure gas pipelines and for the continued operation of the well-built and well-maintained Indian Point Nuclear Power Station. I would also campaign for the construction of additional nuclear plants. In my opinion, nuclear generated electricity is more compatible…

Richard Muller has a lot in common with Amory Lovins. They both received MacArthur Foundation Fellowships (aka “Genius Grants”) several decades ago – Muller in 1982 and Lovins in 1993. They both get a lot of attention from the commercial media and from elected politicians. They both were active members of large environmental groups early…

At about 2:22 Eastern Daylight Time a journalist sent me a brief email to inform me that Dr. Jaczko had just told the House Energy and Commerce committee that the fuel pool at Fukushima Daiichi unit 4 was dry. I had just read a status report that indicated that the temperature in that pool as…

The McClean Lake uranium operation is one of the most productive uranium mines in the world. The above video offers a perspective on the operation and its low impact on the surrounding environment from the people who live and work at the facility.

For the next three days (May 21-23, 2012), the Nuclear Energy Institute is hosting the annual nuclear industry conference and nuclear supplier expo called The Nuclear Energy Assembly. The meeting, normally held in Washington, DC, will be at the Westin in Charlotte, North Carolina. Over the past several years, Charlotte has become a significant hub…