“Don’t wait for a serious crisis to occur. Create one that can be more carefully controlled to your advantage.”
Credit: Fictional natural gas futures trader whose last name might be Dulles or Bundy

One of my favorite sources for natural gas industry news and opinions is RBN Energy LLC. Their blog is near the top of my reading list; the authors claim reached roughly 20,000 energy executives daily.

The June 15, 2017 entry by Housley Carr was particularly intriguing. It’s recommended reading for anyone with a deep interest in the energy industry or in the politics and economics associated with discussions about energy policy choices.

Bad news for the nuclear sector is good news for owners and developers of natural gas-fired power plants — and, of course, for natural gas producers — because gas plants are a primary alternative to nuclear in providing reliable, around-the-clock power. Gas plants also are a go-to choice for supporting intermittently available renewable sources like wind and solar. Today we review the woes facing the nuclear sector, efforts by some states to prop it up with subsidies, and the strong economic/environmental case for ramping up gas-fired generation.

Later on, Carr describes the pressures that the U.S. nuclear industry currently faces.

Most of the nuclear retirements announced so far have been based on economic considerations — while the per-MWh cost of nuclear fuel (uranium) is dirt cheap, older nuclear units can be very costly to maintain and keep in compliance with stringent safety rules.

Though framed as an accidental situation that is merely an opportunity for natural gas interests, there is a distinct possibility that at least a few of the more marketing-oriented readers will recognize that they have a wonderful opportunity to throw an anchor to a sinking swimmer who might otherwise recover to become a formidable competitor again.

An even more select group of readers who’ve been “in the know” in the energy markets for many years might also take on a rather smug look in the privacy of their offices or corporate conference rooms, having a deep personal understanding about how one of the natural gas industry’s most troublesome competitors originally landed in deep water where it is struggling to keep afloat.

During the financial meltdown that became known as the Great Recession, Rahm Emanuel famously told a group of corporate CEOs assembled by the Wall Street Journal, “You never want a serious crisis to go to waste.” Though many people understood him to be describing how skilled politicians turn an existing crisis into an opportunity to excel, more Machiavellian and impatient members of his immediate audience or those who have heard about his comment in other ways remember successful efforts during their careers that helped them avoid the need to wait for any crisis to happen on its own.

Though it is a popular construct to believe in the “invisible hand” of market forces, many successful individuals, corporations and even international cartels have learned to prosper by judiciously applying strategies and actions that affect supply and demand to shift markets so that they behave in ways that benefit bottom lines. Sometimes that can entail actions that stimulate a crisis in plausibly deniable ways.

For example, in Feb 2012, Time Magazine revealed that Aubrey McClendon – then the CEO of Chesapeake Energy, a domestic gas powerhouse – had given $26 million to the Sierra Club during the period from 2007-2010. He would have more than doubled that contribution if Michael Brune had not reversed Carl Pope’s policy when he took over as Sierra’s executive director.

Ostensibly, that donation went directly to the Sierra Club’s “Beyond Coal” campaign, but its underlying goal was to gain a green stamp of approval for the concept of using natural gas as a bridge to the unreachable nirvana of a 100% [non-nuclear and non fossil fuel] renewable energy supply system. Since money is fungible, there’s little doubt that McClendon’s millions supported the Sierra Club’s recently reaffirmed position on nuclear energy, “The Sierra Club opposes the licensing, construction and operation of new nuclear reactors utilizing the fission process…”

The Sierra Club has expended a substantial portion of its political capital and financial resources to encourage the development and implementation of ever more stringent and costly safety rules. They were a player in the successful effort to replace the output of the 2,200 MWe San Onofre Nuclear Generating Station (SONGS) with natural gas fired power plants.

Their formal opposition has helped to delay projects and increase the financial uncertainties associated with investing in nuclear energy development. There is a distinct possibility that McClendon was not the only one of its major donors to have directly benefitted from the successful effort by Sierra and other “green” groups to make nuclear energy more expensive and less competitive.

As Carr reports, natural gas has been capturing an almost steadily increasing share of the electricity generating market for two decades. 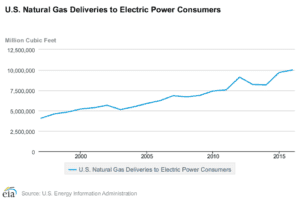 Natural gas growth in electricity was only “almost steady” even though it is a clean burning fuel that can run in affordably simple and efficient power stations. Its market share growth for power generation over the past two decades has been limited by price spikes that rapidly ratcheted up the average fuel price during the period from 2000-2008.

Even though the common wisdom in the 1990s was that natural gas was cheap and would remain cheap for the foreseeable future, growing demand and tightening supplies of conventional gas caused an inevitable market price response. Natural gas prices for commercial power generators rose from less than $2.00 per MMBTU in the late 1990s to more than $12 per MMBTU in the summer of 2008 but that rise was a ratchet, not a straight line. 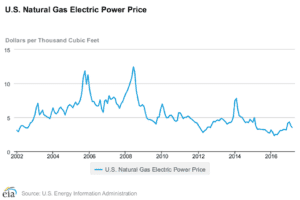 Periodic shortages or demand spikes were often caused by normal variations in weather patterns. Hurricanes disrupted supplies from the Gulf of Mexico while cold weather waves increased regional demand to levels higher than pipelines or storage could handle.

Tightly balanced markets inevitably led to substantial volatility in the domestic price in the deregulated interstate markets. Whenever prices relative to coal on a heat content basis rose too fast, gas lost favor as a power generation fuel source. That led to severe financial pressure and even some bankruptcies among independent power plant operators that had specialized in gas fired generators.

There were occasional periods in which opportunists could purchase factory fresh gas turbine power plants for discounts of 50% or more off of the list price because the original purchaser had cancelled the order after the unit had been produced. Lightly used completed power plants sometimes sold for 30 cents on the dollar compared to their original construction price.

Fuel price pressures were stimulating interest in new coal facilities and there was a greatly renewed interest in extending the lives and upgrading the capacity of existing nuclear plants. For a few years, there was even a growing level of excitement about a Nuclear Renaissance that included building dozens of new plants using refined designs that had been developed and certified by regulators.

As Carr points out, almost everything about that situation has now changed. Natural gas is seemingly so abundant that it can replace both coal and uranium in electricity generation, it can lure manufacturers that use it as a raw material back to the U.S., and it can be exported in ever increasing quantities both through pipelines to Mexico and via LNG export terminals and tankers to almost any customer in the world.

Is Fracking A Revolution Or A Price War?

The initial collapse in natural gas prices after June 2008 was a direct result of falling demand caused by a deep recession. By the time that demand began recovering, however, there was a rapidly growing supply of gas from unconventional reservoirs, particularly shale formations like the Barnett, the Fayetteville, and the Marcellus/Utica. 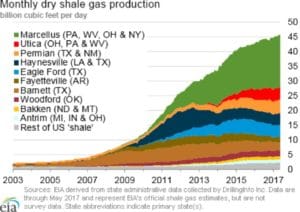 The feverish rate at which companies like McClendon’s Chesapeake were drilling and bringing new supplies to market led to a continuing oversupply situation and prices that were so low that no one was making any money by producing natural gas in the United States.

However, for a variety of reasons the gas industry has not simply slowed down its drilling program to bring supply back into balance with demand. They have been working to improve their cost structures so that they can compete and thrive in a lower priced market. They have also been doing what mature, experienced commodity market participants often do when plagued by low prices – they have been aggressively investing in advertising and marketing to attract new customers, they have been building powerful political bases of support, they have been working to develop additional sales to existing customers and they have been actively seeking to capture market share from their competitors.

It’s conceivable to believe that some of the larger gas interests have deliberately encouraged a temporary oversupply condition to drive prices low enough to force out competitors with less staying power and a shorter time horizon. Those targeted competitors are not limited to over leveraged gas producers, they include coal plants facing significant costs for pollution controls and nuclear plants whose owners have little patience and experience with competitive markets where “price” and “cost” have no regulated or protected relationship.

Some gas interests understand that the demise of a nuclear plant is a permanent market opportunity and that the closure of a coal plant is close enough to permanent so that the difference does not matter. For the long term benefits of addition sales and potentially higher prices, they are willing to accept some short term financial costs.

In cases where ecomodernists who recognize the value of clean nuclear energy, politicians who believe in nuclear technology, its broad economic impacts and its environmental advantages and the owners of nuclear plants have successfully come together to provide a market price floor that keeps emission-free nuclear plants operating, gas interests have squealed in protest. They claim that the “subsidies” provided to nuclear plants in Illinois and New York are unfair and they claim that the proposals in Pennsylvania and Ohio amount to a “nuclear bailout.”

In reality, the natural gas interests might just be mad that their price war isn’t working everywhere with equal efficacy and resigned acceptance.