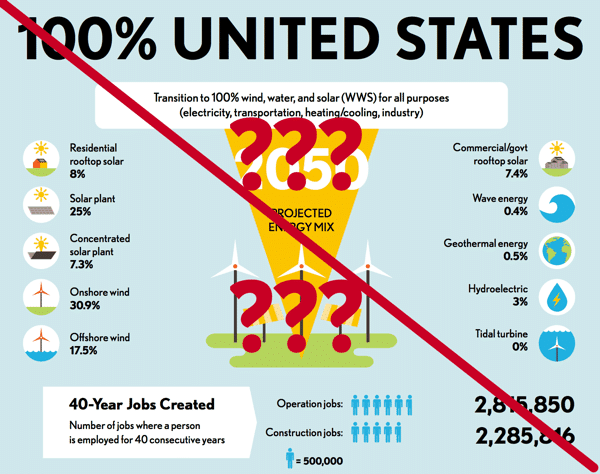 It is neither desirable nor feasible to power modern society by narrowing choices to wind, water and solar

A pernicious myth was forcefully attacked in June when the Proceedings of the National Academy of Sciences published a paper titled Evaluation of A Proposal for Reliable Low-Cost Grid Power with 100% Wind, Water, and Solar.

The abstract of the new paper, which was developed during the past year by Christopher Clack and a team of 20 co-authors, includes the following clear challenge:

“We find that their analysis involves errors, inappropriate methods, and implausible assumptions…A policy prescription that overpromises on the benefits of relying on a narrower portfolio of technologies options could be counterproductive, seriously impeding the move to a cost effective decarbonized energy system.”

The target of the takedown was the influential work Low-Cost Solution to the Grid Reliability Problem with 100% Penetration of Intermittent Wind, Water, and Solar for All Purposes, authorship of which was led by Professor Mark Z. Jacobson, a fellow at Stanford University’s Precourt Institute for Energy.

That report claims via modeling that 100% of the energy – not just the electricity – needed by the United States could be reliably provided at a reasonably low cost by a mixture of wind, water and solar energy.

One of many examples of the implausible and wildly unrealistic assumptions that allow Jacobson’s model to produce what might appear to be a feasible grid power supply mix relates to hydropower.

Jacobson and his co-authors claim that their hypothetical system does not require any new reservoir or dam construction.

In a rebuttal, Jacobson states that his model assumes that U. S. hydropower capacity – which he calls “peak instantaneous discharge rate” – can be increased by adding turbines to existing facilities. He wrote that his assumption was “a solution not previously considered.”

He appears to be unaware of the numerous reasons why hydropower engineers have never published a document mentioning the notion of adding enough turbines to increase capacity by 1,500%.

Aside: It is amusing to note that Jacobson’s rebuttal on EcoWatch was under a headline, 4 Reasons Nuclear and Fossil Fuel Supporters Criticizing 100% Renewable Energy Plan Are Wrong, that provides a clear example of his habit of labeling anyone who questions his work. End Aside.

Though Jacobson’s 100% renewable energy system model might seem absurd “by inspection” to people like Atomic Insights readers whose feet are firmly planted in a world where chemistry, physics, cost accounting, regulations and thermodynamics rule, Jacobson’s work has been influencing energy system decisions since well before November 2009.

That was when a version of his proposal, A Plan to Power 100 Percent of the Planet with Renewables, was the cover story of Scientific American.

Jacobson’s proposal clearly and forcefully opposes any contributions by nuclear energy, even that which is already being cleanly produced by existing facilities.

His work is one of the few available straws grasped by people who claim that climate change is a dire threat that must be immediately addressed while investing just as much time, energy and passion in opposing nuclear energy.

It has been referenced by such luminaries as Sen. Bernie Sanders, Amory Lovins, Al Gore, Bill McKibben and Mark Ruffalo. Jacobson’s papers and appearances have also received publicity support from the Stanford public affairs office.

The asserted possibility of an energy system powered completely by non-nuclear renewables has resulted in a number of entities, including major corporations, municipalities, certain crunchy states and even entire countries to declare that they plan to go 100% renewable sometime in the near- to mid-term future.

Jacobson has been invited to participate in well-attended energy policy debates and has even provided testimony to Congress.

He and his associates have produced and publicized roadmaps showing power mixes that purport to transition the U.S. and 139 other countries around the world to a 100% renewable energy system.

According to his posted Stanford biography, “In 2016, he received a Cozzarelli Prize from the Proceedings of the National Academy of Sciences for ‘outstanding scientific excellence and originality’ in his paper on a solution to the U.S. grid reliability problem with 100% penetration of wind, water, and solar power for all purposes.”

His position as a professor at one of the most respected universities in the world has given his work a mesmerizing sheen of credibility.

Though Jacobson’s work has received numerous challenges – examples: here, here, and here – he has stubbornly defended his findings. He and his supporters have often characterized challengers as shills for interests that support technologies that are left out of his model.

They have taken refuge in the fact that Jacobson’s work was published in a “peer-reviewed journal” while that of many challengers has not always been subjected to that process.

Without a formal, peer-reviewed challenge from a source with equivalent credentials, Jacobson’s work has been allowed to stand as a reasonably valid alternative approach to addressing future energy supply needs.

That is why it is newsworthy to note that there is now a difficult-to-dismiss evaluation of Jacobson’s work showing that his 100% renewable solution isn’t credible. It cannot be claimed as an achievable goal, no matter how much “will” there is to accomplish it.

Nuclear energy remains the only emission free power source that has proven it can power a country and such energy-intensive, off-grid loads as aircraft carriers, icebreakers and submarines.

Chris Mooney of the Washington Post was perhaps the first reporter in the mainstream news to realize that Clack’s paper represented a new phase in the rhetorical battle over our energy future. On June 19, he wrote,

“The debate is crucial because, while it’s great to talk about wind and solar in theory, the reality is that the electrons that they generate have to be sent through wires and transmission stations to satisfy needs at particular places and at particular times–or else, we’ll have to come up with a way of storing electricity on a large scale, which remains a mostly unsolved problem right now.”

Jacobson and his co-authors did not include any representative models of transmission in their solution; they assumed the system issues didn’t exist by using a program that simply matches total load requirements with total power generated as if both happened at the same geographic location.

Mooney has been joined by Eduardo Porter at the New York Times. His work has been picked up by the Chicago Tribune. A host of energy and environmental publications have been ablaze with stories on the “bitter scientific debate” and my energy-focused Twitter feed continues to discuss the event, even though a couple of weeks and a long holiday weekend in the U.S. have passed.

Aside: I’ve noticed via some of the accounts that I follow on Twitter that Jacobson is still engaged and vigorously defending his work. I haven’t seen what he has been writing because I’m a member of the large and growing “blocked by Jacobson” club on Twitter. End Aside.

The appearance of the new paper in this increasingly pointed debate comes at an auspicious time; the Department of Energy is due to release a report studying grid reliability challenges posed by variable renewable energy sources soon. That report was supposed to be released during the same week as the “bitter scientific debate” erupted, but it is now expected to be publicly available sometime in July.

Aside: I added the air quotes in the above because this discussion is not just about science; there are vast economic, environmental and technological issues involved. Few vested participants will give up their positions easily; the debate will, and probably should, increase in intensity over the next few years. End Aside.

A peer-reviewed work by a group of highly qualified and credentialed experts that factually reinforces what the DOE is likely to conclude will help to move the energy policy discussion to a more productive plane.

Perhaps we can return to energy policies that recognize real world constraints and ignore wild notions based on a computer model that is rife with “errors, inappropriate methods, and implausible assumptions.”

Note: A version of the above was first published in the June 23, 2017 edition of Fuel Cycle Week. It is republished here with permission.