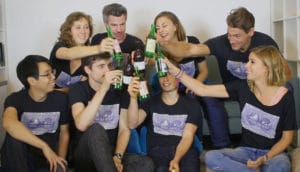 Supporters of South Korean nuclear energy are celebrating today. Earlier this morning, a citizen’s panel decided that President Moon Jae-in had made a mistake by halting the Shin Kori 5 & 6 construction projects.

The 471-member panel, formed by President Moon to provide advice about his plan to phase out one of the world’s most successful and dynamic nuclear power plant construction and operations programs, spent three months reviewing information and discussing their recommendation for the in-progress projects.

The final vote was 59.5% in favor of completing the projects and 40.5% opposed to completion. When the panel was formed, Moon’s government had promised to abide by its advice.

Those twin construction projects, which were temporarily suspended in mid-July, were approximately 30% complete. They were both large, modern APR-1400 reactors with enhanced safety and efficiency compared to most existing units. Approximately $1.4 B had already been spent, but closing out the contracts and partially remediating the site would have added another $900 M to the project losses.

When he was elected president of South Korea with a solid majority, Moon promised that his country would stop building new nuclear power plants at home and that it would gradually phase out it’s domestic use of nuclear energy.

The two Shin Kori units were the same design as the four units being built by Korea Hydro and Nuclear Power at the Barakah site in the United Arab Emirates (UAE). That design is also being marketed as a competitive solution for several different international project opportunities.

Why Did South Koreans Elect A Strongly Antinuclear President?

Many nuclear energy supporters in the United States were surprised when South Korean voters elected a president with clearly expressed plans to eliminate an industry that had been strongly supported for several decades and had matured to the point it was achieving export success.

There were some pro-nuclear activists, however, who were not at all surprised. They were aware of antinuclear campaign efforts by groups like Greenpeace and Friends of the Earth, which had been increasingly active since the Fukushima reactor accidents.

They saw that those campaign efforts were making progress by capitalizing on several well-publicized incidents of corruption and improperly certified cabling and components in the nuclear supply chain. They also knew that Greenpeace had been actively promoting public screenings of a movie called Pandora that has been reported to have influenced both Moon’s position and his election.

That movie is a fictional tale of an event at a nuclear plant initiated by a moderate scale earthquake. Here is how Micheal Shellenberger summarized the movie’s plot and special effects.

After the power plant explodes, “Pandora” flashes manically back and forth between graphic scenes of workers suffering radiation poisoning, a hapless president overwhelmed by shadowy forces, and nostalgic reveries about the good old days, when Korea’s small southern towns were dominated by farming, fishing and tourism.

Some accounts of the background behind the shift in public trust of the nuclear industry, like this one from the Washington Post and this one from the New York Times, overlook or ignore the purposeful efforts to change hearts and minds by organizations that have been honing their antinuclear campaign skills for decades.

Although the citizens’ panel decided that stopping two expensive projects in midstream wasn’t advisable, a majority of the members expressed their support for reducing South Korea’s use of nuclear energy.

Of course, the reputation of clean nuclear energy has also been tarnished by sharing a name with nuclear weapons, especially on a peninsula that is rightfully concerned about being targeted by those incredibly destructive devices.

It doesn’t seem to sufficiently matter to the fearful that there are strong, successful provisions in place that keep South Korea’s nuclear energy industry widely separated from a nuclear weapons technology development effort.

There remains a continuing need to promote the benefits that being a nuclear technology leader provide to South Korea. Those promotional efforts must be truthful and should confront the untruths being spread by organizations like Greenpeace and Friends of the Earth.

The good guys achieved an important win, but the war on the Korean peninsula against the atom and in favor of increased consumption of imported natural gas – under a wind and solar cover story – is still being intensely fought.

A version of the above was first published on Forbes.com. It is republished here with permission.