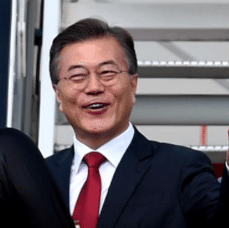 Within weeks of taking office, he took several concrete steps towards fulfilling that promise. He announced the near-term closure of 10 coal plants, he allowed the operating license to expire as scheduled for South Korea’s oldest nuclear plant, he reopened discussion of a long envisioned project to build a natural gas pipeline from Russia through North Korea and he ordered construction to be halted on Shin Kori 5 & 6, two new APR-1400 nuclear reactors.

Moon Jae-in has stated a goal of increasing South Korea’s natural gas market share in electricity production from the current 19% to 27% by 2030. He has also stated that he would like to increase the market share of renewable energy from 5% to 20%, but cautioned that South Korea is not well-endowed with either wind or solar energy resources.

So far, investors in the ROK stock market, both domestic and international, seem supportive of the natural gas development plans; the KOSPI index has seen a 10% gain (from 2125-2375) during the past four months and is now trading in the range of its all-time high.

Considering what we read in U.S. news reports about the regional instability caused by North Korea’s missile testing program and existing nuclear weapons capability, that performance is a reassuring indicator of the attitude of the people closest to the situation.

“From a country which looked like gas demand would drop because of the focus on coal and nuclear, we’re now preparing for an increase in coming years,” said Trevor Sikorski, gas analyst at consultancy Energy Aspects.

“We are seeing a dramatic change in strategy. There has been a big question over when the market would tighten between 2020 and 2030. The change in policy in Korea brings the date forward.”

In addition to the renewed possibility of pipeline imports of natural gas from Russia’s massive far eastern production sources in Siberia and Sakhalin Island, South Korea has a robust capacity to import liquified natural gas (LNG). Unlike the situation of several years ago, there is a glut of worldwide LNG supplies with large new capacity coming on line in Australia, Qatar, Russia and the United States.

There do not seem to be any major concerns in South Korea about continuing its long tradition of being dependent on imported fuel sources.

There is a well-developed supply of trading companies with experience in arranging deliveries and South Korea’s shipbuilding industry is one of the world’s most productive. It has developed an impressive capability to build the specialized tankers required to move supercooled LNG around the world, so it benefits when that trade increases.

In the past couple of years, South Korea’s shipbuilding industry has experienced a period of low demand because of a reduction in commodity prices and a slowdown in the LNG market. Moon’s energy plan will help inject new vitality in that ailing sector of the industrial economy.

Moon Jae-in’s background gives some clues about his strong interest in building up South Korea’s consumption of natural gas. He has a deep desire to gradually remove the barriers – physical, political and economic – that make his ancient country the last remaining nation split by the Cold War.

He was born in a refugee camp in South Korea to parents who had fled from the North. In his mother’s family, she was the only one who left. She is now 90 years old and has a living sister that she has not seen in six decades.

Moon Jae-in knows that his mother is one of tens of thousands of people that have experienced similar family separations. He is clearly motivated by the fact that there is little time remaining before that generation disappears.

During a recent speech to the Korber Foundation in Berlin, Moon Jae-in eloquently described the importance of taking steps that would reduce tensions between the North and the South and enable a gradual transition to a unified country.

He used the example of Germany’s reunification and subsequent economic and political development as a model with many lessons to be learned and adapted.

Along with plans for increased transportation links and a shared belt of economic infrastructure projects, Moon mentioned the gas pipeline project as something that would benefit both the North and the South while binding them closer together with a shared interest.

Presumably, a gas pipeline through North Korea could be readily financed if political risks are reduced by including plenty of connections within the North that could be used to provide fuel to power a dramatically underpowered region.

An overland pipeline network with good connections to South Korea could be of significant interest to Japan, its gas customers and its banks; there is not much water to traverse between the Korean peninsula and the island nation.

A unified Korea would also have a much greater chance of meeting an aspirational goal of providing 20% of its electricity from renewable energy sources. Not only is the North less densely populated, but it has a vast, underused hydroelectric capacity that was severely damaged by bombing campaigns during the Korean War and never fully repaired.

Currently, two thirds of South Korea’s electricity comes from coal and nuclear plants. If the geopolitical and economic goal is to increase natural gas consumption, existing sources must be pushed out of the market to make room for increased use of gas.

There are obviously costs involved and interests that will be harmed by the change, so the pragmatic political decision might logically include efforts to demonize coal and gas as a way to motivate a greater acceptance of the financial costs.

It’s not difficult to convince people in developed countries that they should be reducing their use of coal; that campaign has been running for decades already.

In most countries, there are long running, successful efforts to spread dislike of nuclear energy for reasons of safety worries, actual costs or a combination of both.

The effort to discredit nuclear energy has been a bit more difficult in South Korea because the country has enjoyed a rare success with developing a cost-effective, safe and reliable nuclear industry that can deliver projects near their promised cost and schedules.

With the help of gas-interested media outlets like RT and Al Jazeera [owned by Russia and Qatar respectively], there has been a sustained and apparently successful effort to convince a plurality of South Koreans that the events at Fukushima prove that nuclear energy is too dangerous to rely on for South Korea’s future energy demands.

It remains to be seen whether or not South Korea’s nuclear industry will successfully overcome the negative propaganda and convince Moon Jae-in and his governing coalition that it must remain an important part of the power supply for the Korean peninsula, a source of Korean economic strength, and a source of continued growth in the country’s international stature.

The next three months are an important period; Moon Jae-in has set up a process for determining how the public really feels about his plan to cancel the partially completed Shin Kori 5 & 6 nuclear plants.

Presumably, the affected suppliers and contractors will work to help the public better understand the value of retaining and reinforcing the nuclear industry while recognizing the geopolitical value of increased gas consumption.