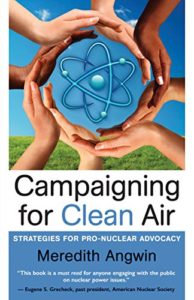 Cover art for Campaigning for Clean Air. Used with permission.

It is heartening to take note of all of the distributed efforts being made around the globe to push nuclear energy back into the conversations relating to current and future energy supplies. For far too long, one of the most amazing, high potential scientific advancements of the 20th century has been demonized and marginalized.

Many fine people who have expressed their support or sense of wonder about releasing vast quantities of useful power from tiny quantities of uranium, plutonium or thorium have been shouted down and labeled as evil shills for greedy corporate entities. They have been accused of not caring about children, burdening future generations or even irreversibly harming the health of the planet that we all share. Some very shrill, almost maniacal antinuclear activists have even gone so far as to call nuclear advocates “baby killers.”

The tides are turning and those kinds of discomforting accusations that can silence most well-meaning people are becoming more rare, though they have not disappeared altogether. 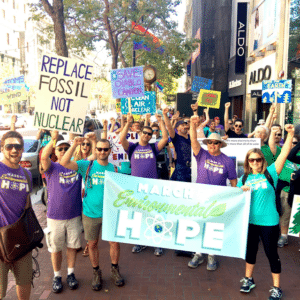 Now that the trailblazing efforts have been done in many places to make it socially acceptable to come out as a nuclear energy advocate, I’m detecting growing interest among the silent majority to learn more about how to effectively express your true feelings and take action that will help move the needle in the direction of stronger public support.

When anyone asks me how they can be a more effective atomic advocate or even graduate into full fledged atomic activism, I point them to an incredible little book titled Campaigning for Clean Air: Strategies for Pro-Nuclear Advocacy. Available in both Kindle and paperback, it is a genuine how-to book written by an expert who has actually tested the techniques she describes. 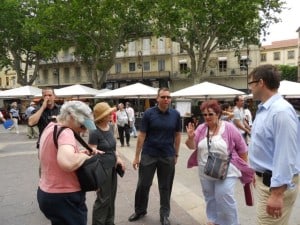 Full disclosure: Meredith Angwin, the author of Campaigning for Clean Air is one of my best friends. We met each other during an incredible tour of Areva’s production and research facilities in France during June of 2010. We didn’t know it at the time, but that trip turned out to have occurred at the tail end of a very optimistic period called The Nuclear Renaissance.

Meredith is one of those delightful people who is both self-effacing and incredibly accomplished. Perhaps it’s because of our initial introduction on a train trip in France, but I’ve come to think of her as a real life Miss Marple. She doesn’t solve murder mysteries, but she is an accomplished, resourceful woman who presents an outward appearance that causes some to underestimate her. I’m still learning about some of the things she has done during her career; she’s almost apologetic about sharing her success stories.

Meredith is a physical chemist who entered the energy field as a pollution reduction expert for geothermal energy plants in California. Her experience taught her that renewable energy sources like wind, solar and geothermal might be able to move the needle and slightly change our energy production system, but by themselves they were incapable of replacing very much of the fossil fuel that powers our modern society.

She sought ways to apply her skills as a chemist to nuclear energy, and became an expert in the control of steam generator corrosion. She eventually worked her way up to become one of the first female project managers at the Electric Power Research Institute, EPRI. Later, she founded an ran a small, successful consulting company.

Aside: Somehow, Meredith and her husband, George, also managed to raise a couple of very accomplished offspring. For example, Some of you might have seen their daughter Julia being interviewed about cyber security or the surveillance state or remember her work in the Wall Street Journal from 2000-2013. End Aside.

Throughout her technical career, she maintained a deep interest in writing. In the introduction to her book she describes writing as “more than an avocation.” The skills she learned as a participant in writer’s clubs, as an aspiring novelist and in technical writing help to make Campaigning for Clean Air readable and enjoyable.

Like the best how-to books, Meredith’s little instruction book for budding nuclear advocates is punchy, filled with practical exercises, gives step by step instruction with options and provides pointers to additional sources of help and information. It’s well organized and motivating; there are times when you want to simply put down the book and take one of her recommended actions to see how it works and feels. Then you can jump back into the next chapter to learn another technique worth trying out almost immediately. 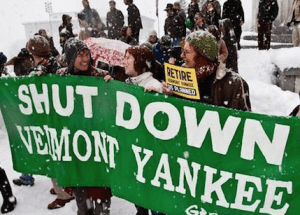 Activists rally outside the Statehouse following a vote by the Vermont Senate to retire the Vermont Yankee nuclear plant in 2012. Since the plant’s closing, energy derived from natural gas has increased more than 5 percent.

If my design of this post has succeeded, you should be anxiously wondering – “but what about the brownies?” One of the more useful and enjoyable tips that Meredith offers stems from her observation that many local antinuclear groups have a well established social support aspect. The people involved get together frequently and build friendships around the activities related to their efforts to halt the use of nuclear energy. When they get together, it’s not all work, they enjoy snacks, beverages and wide ranging conversations.

As a pro-nuclear advocate in Vermont, Meredith noticed this fact and often felt a bit deprived. She determined that there is a “brownie deficit” between the supporters of nuclear energy and their opponents. She wants to help eliminate that deficit by giving nuclear advocates permission to have fun, share snacks, talk about topics outside of their interest in nuclear energy and build a supportive community.

Pick up her book. Read it. Apply the lessons that seem to best fit your personality and interests. Then, as you get more comfortable as a visible advocate for a technology that is powerful enough to save the world, try out some of the actions that might stretch and expand your existing comfort zone.