On July 27, 2015, the Wall St. Journal published an article written by Rebecca Smith titled Prefab Nuclear Plants Prove Just as Expensive. That piece has been widely shared and discussed on social media with more than 2700 shares on Facebook and more than 150 shares on Twitter as counted from the original article. I suspect that there have been several times those numbers of additional shares and retweets, based on my own limited sample on both sites.

Though the headline and article content are welcomed by those who oppose nuclear energy and disappoint many who favor its deployment, no one should be surprised. Unfortunately, many people from both points of view seem to believe that it’s another example of the nuclear industry failing to live up to its promises. Here is a quote from the article:

Building nuclear reactors out of factory-produced modules was supposed to make their construction swifter and cheaper, leading to a new boom in nuclear energy.

But two U.S. sites where nuclear reactors are under construction have been hit with costly delays that have shaken faith in the new construction method and created problems concerning who will bear the added expense.

My headline question is a serious one; I’d really like to find the marketing and sales people who oversold the benefits of of using manufactured, prefabricated modules over on-site construction. It would also be nice to locate examples of literature or presentations demonstrating excessive promises.

I’m not denying that there are substantial long-term advantages, but it is well-known among practitioners of modularity and series manufacturing that any cost and schedule related advantages of the choice would only appear in “nth of a kind” units.

No matter which modular industry one studies, there is always a cost and schedule challenge associated with creating a supply chain, tooling up for manufacturing, shaking out quality-related issues, refining interfaces between both components and suppliers, training distributed work forces, and establishing the logistics required to put the right components and modules in the right place at the right time.

Aside: I not a modularization expert, but I was once tasked with drafting initial versions of procedures required for an effective program of using prefabrication and modular construction for a nuclear reactor project. My participation in that task spread out over dozens of meetings during a several year period, yet the program was still in the early start-up phase when I made a career change. I had the opportunity to learn from some experts in the field; it is an enormously complex task, made even more difficult in an industry with a regulator and suppliers that have little experience in the processes. End aside.

The rate at which the various issues are solved depend on the industry and its relationship with regulators, customers, partners and suppliers. The more cooperative the environment and the better the interests of the various parties are aligned, the quicker the start-up issues can be solved.

The required improvement process works best when all parties recognize that prompt solutions will result in increased future sales and profits; incentives to compromise in disputes disappear when major order cancellations increase the risk that investments and other actions to solve problems will produce results that are too late to have positive effects.

The situation at the Vogtle and VC Summer projects is not ideal. There are almost unbelievable sums of money at stake, additional customers that could benefit by problem solutions are putting their orders on hold, and suppliers are justifiably nervous about making substantial investments in manufacturing tools due to the paucity of firm follow-on orders. The initial module supplier plan had to be essentially torn up and recreated with new subcontractors. The process is complicated by the fact the AP-1000 modules are some of the largest ever attempted by any industry.

Even with all of those challenges, the people working on the project are making good progress as demonstrated by the improving quality and schedule performance on the second units at each site. The utility customers, though disappointed with the performance and perhaps justifiably upset that they are being asked to pay some of the costs of being early adopters, are benefiting from low interest rates on borrowed money and low commodity prices.

Tom Fanning — the CEO of Southern Company, the parent of Georgia Power, plant Vogtle’s lead customer — has consistently explained that the final cost of the project for customers is likely to end up being less than expected when the project was initially budgeted.

My prescription, based on several years of running a manufacturing enterprise along with a deep immersion in the history of nuclear power plant construction programs is to press forward. Keep focused on solving the problems to enable improved performance on the next projects.

I also hope that marketers and salespeople in the nuclear industry learn that this is one enterprise where it is better to “underpromise and overdeliver” than to make rosy predictions that cannot be fulfilled. Word of mouth among disappointed customers can be fatal for an already embattled industry.

I disagree with people like John Rowe, who state that nuclear energy is just a business and not a cause. If it is to succeed, it needs to be pursued with as much passion and dedication as any other innovation that has the power to save the world.

Utility customers should put down the journalists’s interpretations of the nuclear revival story and dig deeper to recognize that they cannot make multi-decade investment decisions based on short term prices of a volatile commodity like natural gas. They should take time to imagine what the natural gas price trajectory will be if the gas industry succeeds in killing off both coal and nuclear as competitive suppliers in the electrical power market.

All of us need a viable nuclear option; one necessary ingredient to enable that option is for utility customers to demonstrate a greater commitment to purchasing new plants. Vendors and their suppliers must also commit to making the investments required to shake out inevitable start-up issues. 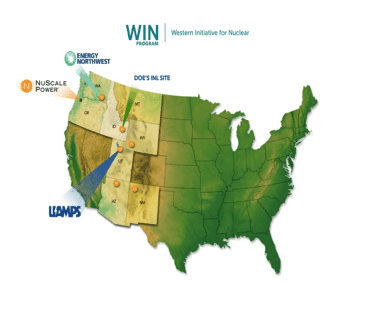 On Friday, Nov. 5, I heard an inspirational talk given by a man who had a big influence on my early career; he was the Brigade Commander who welcomed the class of 1981 to the US Naval Academy on July 6, 1977. Col. Art Athens, USMCR (Ret.) is now the Director of the Stockdale Center…

The Nuclear Regulatory Commission has published its vision and strategy for preparing to review applications for permission to begin building reactors that do not use light water as the coolant. Policy makers who are interested in ensuring that American reactor developers have the opportunity to lead in the nascent – but potentially very lucrative field – of…