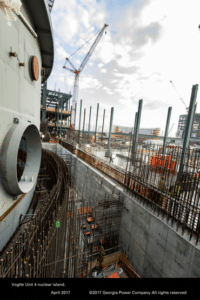 Late yesterday evening, Georgia Power announced that it and Westinghouse had come to an agreement – “in principle” – that would result in a transition of the Vogtle 3 & 4 project management from Westinghouse to Southern Nuclear and Georgia Power. The service agreement would not go into effect until after the current engineering, procurement and construction contract has been rejected in Westinghouse’s bankruptcy proceeding.

The transition agreement does not commit Georgia Power and its partners to a decision on the completion, partial completion or abandonment of the two unit construction project.

Construction work will continue as currently scheduled through June 3 under an interim assessment agreement while Southern Nuclear and Georgia Power continue their effort to produce a cost-to-complete estimate and an executable project schedule. Those items will be the basis for discussions with its ownership partners (Oglethorpe Power, MEAG Power and Dalton Utilities) and the Georgia Public Service Commission to determine the best course of action.

Georgia Power reiterated its determination to do everything in its power to hold Westinghouse and Toshiba, its parent company, accountable for meeting the commitments they have made.

As was the case two weeks ago, when the previous interim assessment agreement expired, Georgia Power’s press release was issued within a couple of hours of the midnight expiration. This time, the release was published at 10:54 PM Eastern Daylight Time.

There are no easy decisions available.