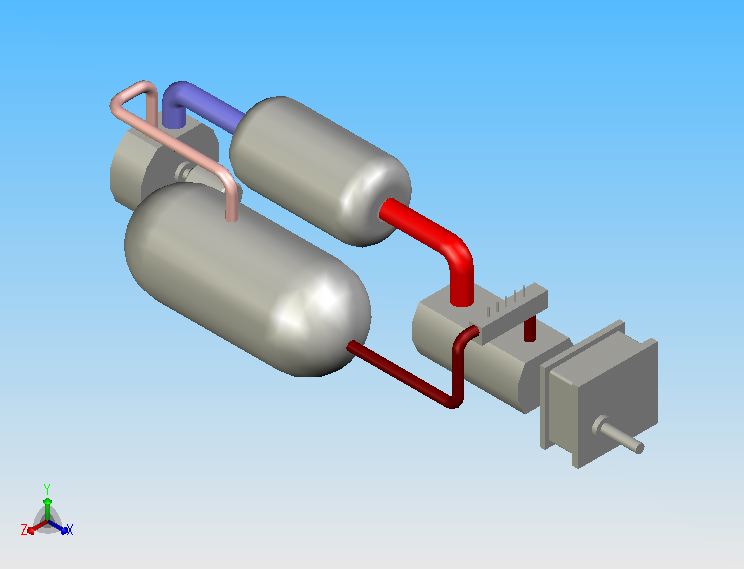 Though I am not actively pursuing the idea right now, I have had several opportunities in the past couple of days to explain to people why I made the design decisions I did when putting together the Adams Engine concept. As a rather lazy man, I figured it would be easier to repurpose those arguments for an article here rather than take the time to research and write a new post on a completely different topic. You might also be interested in reading the conversation in a previous thread that starts here.

Besides the discussion with Cyril R, Brian Mays, Engineer-Poet and me, I recently published a response in a thread that was discussing a hybrid concept that starts with a high temperature pebble bed reactor similar to the one that Dr. Per Peterson has been conceptualizing at Berkeley and adds a natural gas heat source that can provide the ability to respond to changes in load demand.

I added the following comment to the discussion. (Note: anyone who saw the original may recognize a few minor editorial changes. Any writer worth his salt is rarely satisfied with any produced work the second time he reads it.)

While I think your concept is interesting and has substantial development merit, I wonder if it is worthwhile to use natural gas as the mechanism for flexibility instead of simply operating a variable power nuclear reactor at partial load with the potential to rapidly ramp to higher power as required to meet demand.

I know that conventional thinking in the commercial nuclear world is that the most economical way to operate reactors is at full power all of the time, but that is partially because commercial owners have nearly always operated their plants in grids where there are plenty of other generators that have much higher fuel costs. When there is insufficient demand, it saves more money to stop running high marginal cost machines than to turn down a machine with very low or zero fuel costs.

However, the infrastructure for supplying a hydrocarbon fuel and for controlling its heat input to a power generating system is not free. Providing fire protection when you have a large source of combustible material is also not free. Most importantly to me, natural gas is not an option for any customer who does not have an existing pipeline delivery system.

(The distribution challenge for natural gas is personal for me. Many North American people these days are gushing over how much money their natural gas appliances and heating systems save them; I have to buy propane for my gas fireplace because there are no pipes in my neighborhood. Per unit of heat, propane costs about 3 times the current price of natural gas, therefore the fireplace is simply a decoration that is cleaner and less trouble than chopping wood. I consider my home heating system to be “all electric.” I also cannot remember having a gas pipeline to the grid-independent power systems I was trained to operate as a young junior officer in the nuclear Navy.)

Any economic analysis needs to be thorough to determine which is cheaper to build and to operate over the long term; a nuclear system that is designed to be reasonably economical at partial load or a hybrid system like the one you have been describing. Each of the options has a varying probability of winning a sale depending on the site conditions and customer needs.

For the record, I have devoted a substantial portion of my adult life to designing a responsive nuclear heated gas turbine concept that marries a high temperature pebble bed reactor to a compressor / turbine system that operates in a pressure and temperature regime that is similar to the one used for an open cycle combustion turbine, but it is a closed cycle system with a cooler instead of an exhaust system.

The reactor is comfortable operating at whatever power the operator demands – down to self-sustaining with no electrical power delivered to the grid. The inherent negative temperature coefficient of the reactor means that fission heat input will follow the power demand up to the point where the throttle is fully open and the compressor is running at full speed. The compressor / turbine unit is likewise designed to operate at partial load and to be responsive to changes in power demand. (Remember, this is the same machinery as that used in a combustion turbine and we all know how responsive they are.)

There is enough excess reactivity in the system to handle Xe transients over a reasonably long operating life; the fuel form has proven to be capable of exceeding 18% burn-up; the relatively low CF will simply increase the operational cycle between refueling.

The key decision that enables this marriage that seeks to use cheap, emission free fission fuel in combination with the low capital cost of a conventional, essentially off-the-shelf compressor / turbine unit is using low pressure nitrogen gas as the working fluid / coolant instead of high pressure helium. The focus on reducing capital cost – what I call “the big noise” in nuclear energy development – also leads to a simple Brayton cycle, not one with any reheat or intercooling.

Some challenge my decisions based on the fact that N-14 has a cross section for absorption of neutrons of 1.8 barns. The (n,p) reaction turns N-14 into C-14, a long lived (half life of 5,730 +/- 40 years), low energy beta emitter. The number of bequerels produced in the closed cycle coolant is impressively large, but the radiological hazard of that material is acceptably small. There are various design choices that can provide good mitigation and ensure that the amount that reaches the environment is not enough to harm anyone.

I have also been challenged regarding the way low operating pressure affects machinery and piping sizes; my response is to point to the millions of economical combustion gas turbines operating today. I have a similar response when people suggest complicated Brayton cycles vice a simple cycle – there are few examples where commercially viable systems are anything but simple cycles or combined cycles with the waste heat from a simple Brayton cycle heating a conventional Rankine cycle.

If it is economical to add a bottoming cycle to an Adams Engine installation, that can be done after several units have proven to be as responsive and useful as I think they will be.

More information on the Adams Engine is available at http://adamsengines.blogspot.com/ but the publicly released information is not complete – for a variety of reasons.

Disclosure: this is a paper nuclear power system, but all systems have to start on paper. Only one closed cycle, nitrogen cooled, nuclear heated gas turbine has ever been built. It only operated for a few hundred hours and only achieved a power output of 200 KWe with a thermal efficiency of just 7%.

For me, the key piece of information is that it did, in fact, operate and produce a useful quantity of electrical power.

PS – I continue to like the IFR; I just wanted to point out that there are plenty of ways to use nuclear fission heat. Basing our energy system on nuclear fission does not mean putting all of our eggs any any particular technological basket, any more than using chemical combustion has forced us all to use the same kind of machinery for all of the myriad tasks that we ask combustion to perform for us. 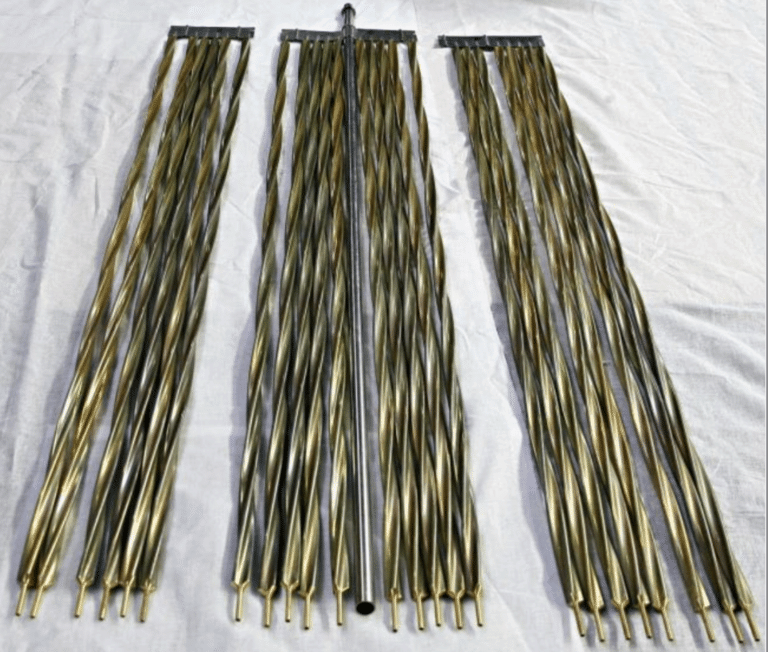 I received a pleasant surprise near the end of May while performing a spot check of my modest portfolio of individual stocks. Lightbridge (NASDAQ: LTBR), a holding that hasn’t performed well for several years, had nearly doubled since my check a week before. Since then it has ratcheted up another 20% or so. My online…

In the past half dozen years, the term “small modular reactor (SMR)” has entered the nuclear energy lexicon. Numerous projects have been initiated to develop various concepts, all aimed at producing nuclear reactor based power plants that are small enough to be built in a factory setting to take advantage of concepts like series manufacturing… 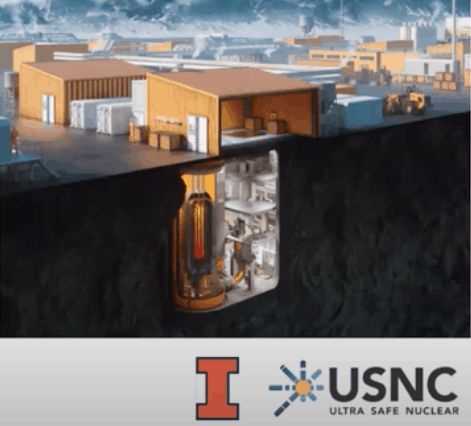 The University of Illinois at Urbana-Champaign has a stretch goal of completing its next research and test reactor by the end of 2025. It has assembled a team that includes several other major universities, national labs, and industrial partners. It has selected the MMRTM, a product that is being developed by USNC (Ultra Safe Nuclear…

On July 27, 2015, the Wall St. Journal published an article written by Rebecca Smith titled Prefab Nuclear Plants Prove Just as Expensive. That piece has been widely shared and discussed on social media with more than 2700 shares on Facebook and more than 150 shares on Twitter as counted from the original article. I…

A large number of “hot takes” are appearing now that the cold wave that began arriving on Feb 11, 2021 has moved into areas where sub-freezing temperatures in Feb are normal. If the politically charged nature of the takes could be harnessed, the energy released would be able to keep quite a few homes supplied…