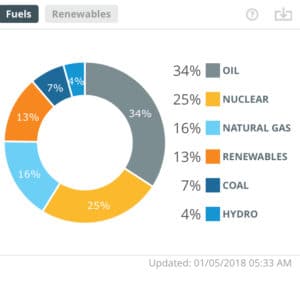 Since 2014, investor-focused publications have used terms like ‘awash in oil’, ‘oil glut’ and even ‘world is “drowning” in oil’ to describe the world’s stockpile of already extracted and stored inventory of crude oil. Similar phrases have also been occasionally used to describe inventories of various refined products like gasoline, distillate fuel oil, and kerosene.

The stubborn cold wave that has been in place in the U.S. for the past several weeks may help to solve that problem for OPEC and other oil producers. If current actions continue for much longer the deep freeze may lead to a pricing situation that the investment community calls “bullish.”

Most of the customers who purchase refined oil products will not react with such positive-sounding language. Neither will oil refining companies that are not part of a vertically integrated multinational oil company.

Many observers who talk about energy believe that nearly all of the oil used in the U.S. is in transportation markets. They might wonder how severely cold weather would drain oil stockpiles and return pricing power to oil market bulls. After all, winter storms can ground air travelers keep motorists and truckers off the road and thus not burning much fuel.

Under most circumstances that is a reasonably accurate interpretation. The U.S. Northeast is different as the result of a series of choices that led to a large scale trend.

Though the Northeast‘s historical dependence on imported oil made it an early adopter of nuclear energy and one of the most pro-nuclear areas of the country, it has been home to a strong and successful antinuclear movement since they late 1960s. It’s also a region where coal burning has always been barely tolerated as a last resort where there were no cheaper alternatives.

Since the introduction of cheap natural gas extracted from vast reservoirs either in the region or adjacent to it, antinuclear forces and anticoal environmentalists have successfully pushed for the permanent retirement of several large generating stations. 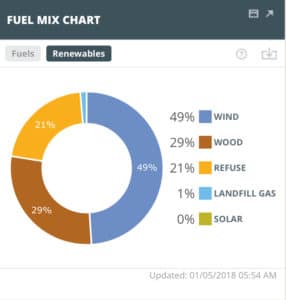 Pie chart of ‘renewables’ that together were supplying 13% of ISO-NE grid supply as of 5:54 am Jan 4

The electricity that used to be produced by those stations has been replaced by burning natural gas, capturing more wind and solar when available and burning “other renewables” (a term that refers mainly to wood, refuse and landfill methane).

That price differential is made possible by the nature of a fuel that is normally a vapor at standard temperatures and pressures. Vapor can’t just be loaded onto a truck or into a rail car to be moved to an area where a shortage has created a big price differential. If the normal pipeline transportation system is at capacity, there is a constraint that cannot be overcome in the short term.

Since natural gas has a vital use in keeping people at safe living temperatures during cold weather, an increasing portion of the limited capacity for moving the fuel is diverted into the heating market. Since the amount of fuel needed to keep a space warm in a function of the difference between the indoor temperature and the outdoor temperature, fuel burn increases dramatically at the kind of temperatures experienced in recent weeks.

All of these effects were made obvious during the winter of 2013-2014, a period that is called the Polar Vortex. Of course, what we are currently experiencing is also a polar vortex, but now people are creating new terms in either an attempt to reduce confusion or to bump media ratings.

After the winter of 2014, the lesson that seemed to have been learned was that natural gas supplies, particularly in New England where there is a limited delivery capacity, are insuffient to handle severe weather. Some pipeline expansions have been completed, and several more are being planned. Total capacity has increased, but not sufficiently and not fast enough.

As a stopgap, grid operators have provided incentives for gas fueled generators store fuel on site. Since gas is as difficult to store as it is to transport, the stored fuel is generally in the form of distillate fuel oil (a term that describes a petroleum product that is almost interchangeable with diesel fuel and heating oil). In a few rare cases, the stored fuel is liquified natural gas, but those tanks are more expensive to install and maintain than oil tanks.

Of course, storing fuel on site comes with its own limitations. Tanks have a finite capacity and a finite cost. Filling a storage tank ties up capital; in a warm winter, it is quite possible that the oil will not be needed. Oil price volatility adds risk to the decision on when to fill tanks and what to do with leftovers once the weather warms back to the point where gas is suffiently abundant and cheap again.

A somewhat complicating aspect of the situation is the fact that there is still a large heating oil market in the Northeast. Less densely populated areas rarely have a natural gas distribution system, leaving customers with the choice of oil, propane or wood for heat. Even in areas there there is gas, some customers haven’t converted. There is an initial expense, some customers like to have their heating fuel on site, some are convinced by fuel delivery company ads that oil heat is better than gas heat and fuel oil prices have been low enough to be competitive.

When cold weather extends its stay, there can be a series of cascading events that can eventually have dramatic effects. The effects start as local, but can quickly affect the world oil markets.

Generating stations begin running low on stored fuel and must arrange to be refilled. Homes and businesses that use oil for heat have the same issue and will often be in the market for refills in competition with the electricity generators. Storms can inhibit transportation and cause delays in delivery.

When the weather is brutally cold, running out of fuel can be deadly. Even if the local delivery service can schedule a delivery, there may be limits on the amount each customer can obtain and the prices might shock some customers who are not on some kind of stabilization plan.

The bottom line is that a country that had successfully eliminated oil from the electricity and space heating markets has returned to dependence during cold spells. Though that situation has national level implications – every president since Nixon has promised to reduce out dependence on oil – the decision seems to have been made by the faceless market.

Who decided to make the U.S. electricity and heat supply more dependent on oil?

In reality, markets do not make decisions. Individuals and teams do, often without any kind of grand strategy. At the risk of being dismissed as a conspiracy theorist, I’ll remind you that the most successful players and investors employ teams of some of the brightest people in the country to help them plan their market moves. Some of those teams focus on tactical, short term trades, but some also engage in long range, strategic planning.

Some of my smartest acquaintences have become quite successful by participating in these teams.

The shift between excess supply and insufficient supply only requires a few percent change in either supply, demand, or both.

Since the “glut” has been with us for over three years, there has been a dedicated effort in the past six-nine months to restrain production and encourage new demand. Some of the new demand has been created by the retirement of coal and nuclear plants; I suspect that some of the political and economic power of the efforts to force closure came from oil and gas promoters and speculators.

The U.S. entered the winter with fuel inventories that were slightly below those from the same dates in recent years. It also has shut down a number of generating stations burning fuels that are competitive with oil and gas, providing options that mitigate some of the effect of unexpectedly strong weather-related demand.

Unfortunately, there will be a great deal of money moving from some pockets into other pockets without actually improving overall national wealth.

The 30 day delay in decsion making that Energy Secretary Perry granted the FERC in relation to his NOPR requesting a grid resilience pricing rule seems to have provided an opportunity for nature to make a forceful comment in favor of fuel diversity. It may be okay for the nation to choose to replace coal and nuclear plants with natural gas and renewables, but the potential costs of that decision are becoming more apparent.

PS Yesterday at 1:18 pm, a fault in the grid serving the Pilgrim nuclear station caused the plant to go off-line. That was the first time in the past several weeks when the fuel sources supply graph for ISO New England changed from a straight line at 4031 MW. Fortunately, there was a sufficient margin of available generation to make up for the Pilgrim trip.