R. Shane Johnson recently briefed representatives of the U.S. nuclear power industry about the the strategies and programs that the Department of Energy (DOE) is developing to implement the Trump Administration’s vision for nuclear energy.

Johnson is the Deputy Assistant Secretary in the DOE’s Office of Nuclear Energy. He’s the senior career civil servant in that branch, which has an annual budget of less than $1 B out of the Department’s $27 B annual budget..

Johnson began his talk with the bottom line.

“The government of the United States in the realm of nuclear energy is asking, looking and expecting the industry to lead where the government goes.

If you take anything else away from what I say that deviates from that, I apologize.

But the bottom line is we’re within a time when there has been the realization of those who live and work in the swamp that the government doesn’t have all the answers and that the way out in terms of the nuclear industry is the industry itself.”

Johnson followed that charge to the industry by reminding the audience that there have been many good words said about nuclear energy during the past six months, and backed that statement up with a slide displaying strongly positive quotes from both the President and the Energy Secretary Rick Perry.

Trump: “We will begin to revive and expand our nuclear energy sector…which produces clean, renewable and emissions-free energy. A complete review of U.S. nuclear energy policy will help us find new ways to revitalize this crucial energy resource.”

Sec. Perry: “If you really care about this environment that we live in…then you need to be a supporter of this [nuclear energy] amazingly clean, resilient, safe, reliable source of energy.” 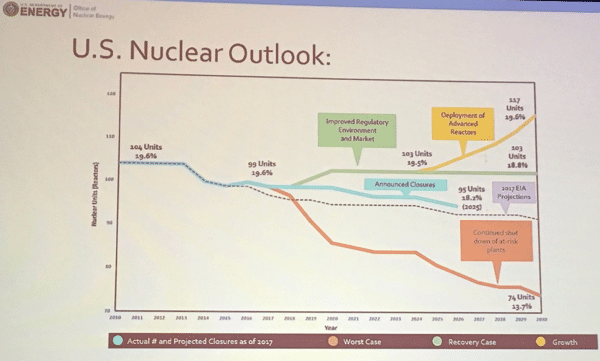 What path will the US take for nuclear energy?

Johnson showed a graph that displayed three divergent lines. Of the first two, one projected a rapidly disappearing nuclear reactor fleet with about 70 units in operation in 2030, and the second a leveling off at 93 units in 2025, after implementing the already announced closures.

But the third, labeled “Improved Regulatory Environment and Market,” depicted growth to 103 units operating in 2025 and a sharply rising line after that point labeled “Deployment of Advanced Reactors.”

The graph stopped at 2030 with a prediction for the final scenario of 117 units producing just under 20% of U.S. electricity but the slope indicated accelerating growth.

What the Energy Department plans to do, to help the nuclear industry help itself, is remove regulatory roadblocks, reforming the market by leveling the playing field and working closely with states, and improving financial tools like the Ex-Im Bank and public/private partnerships.

Under current leadership, the definition of advanced reactor is any reactor that has not yet been commercially deployed, a change from the previous administration.

The DOE official stated that the underlying reason for the revision was a desire to reduce in infighting and to unify currently separated groups of people who all share a common goal of producing better nuclear energy products.

In implementing its support of innovation and advanced reactors, the DOE is developing a new funding opportunity announcement (FOA) that will be less prescriptive than recent FOAs in terms of eligible technology paths.

As the DOE funding level increases, so does the share of matching private sector funding. Small, early stage projects with work performed by DOE labs or requiring more than one meeting with the Nuclear Regulatory Commission might not require any specific private funding match. Large projects like getting a design certification might require a 50/50 cost share. He did not announce an issue date for the FOA.

During the Q&A session an audience member asked if there was any discussion in Washington about ways to help the 5,000 people who were fired with little or no notice when the owners of the V.C. Summer expansion project announced they were stopping work.

Johnson said he was not aware of any such discussions, but reminded the audience that did not mean they were not any taking place. He asked the questioner for contact information so that he could find out more and provide follow-up information. Later, the DOE official told a small group, including Fuel Cycle Week, that he understood the question to be mostly about immediate human resources issues.

Those issues are outside of the responsibilities assigned to the Department of Energy. The federal government has other agencies tasked to respond to human resources concerns so Johnson wouldn’t expect to have been included in any meetings they might have held.

A member of the group stated that the best way to help the workers—and improve the future of the U.S. nuclear industry— was to enable the project to move forward to completion.

Johnson agreed and indicated that there were discussions on that topic in progress. He was reminded that the clock was already ticking and that loss of quality assurance control for a nuclear facility would require a time-consuming and expensive recovery effort.

Note: A version of the above was first published by Fuel Cycle Week in edition #715. It is republished here with permission.