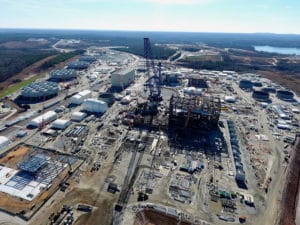 Several leaders in the South Carolina government are actively searching for ways to revive the V. C. Summer expansion project. The project includes construction of two Westinghouse AP1000 power plants capable of producing 1,140 MWe each. That is enough new nuclear capacity to enable the state to idle or close almost all of its coal-fired generating capacity. For a variety of cost, schedule, supplier and ownership issues, the project was halted on the last day of July.

SCE&G reported that the decision was very difficult, but made necessary when Santee Cooper announced that it was unwilling to continue. Santee Cooper, a state-owned utility company that owns 45% of the expansion project, determined it could no longer expose its customers to responsibility for an unknown project cost and an unknowable completion date.

As a publicly regulated utility, SCE&G was required to file an abandonment plan with the South Carolina Public Service Commission. It needs PSC approval for its plan to stop working on the project and to recover expended costs in customer rates over a 60 year period. That plan included giving the PSC information about the treatment of compensation received from Toshiba as a result of its failure to perform certain guaranteed contract provisions.

Yesterday, SCE&G announced that it had voluntarily withdrawn the abandonment petition.

In a statement, the company said: “Over the past two weeks, SCE&G management has met with various stakeholders and members of the South Carolina General Assembly, including legislative leaders, to discuss the abandonment of the new nuclear project and to hear their concerns.” SCE&G said its decision to withdraw the abandonment petition was “in response to those concerns, and to allow for adequate time for governmental officials to conduct their reviews.”

Scana president and CEO Kevin Marsh made it clear that conditions must change before his company could revise its previous decision. The project could only move forward with a willing and capable partner, a new ownership agreement, a suitable agreement with a capable construction firm – he mentioned Fluor but left open the possibility of “someone else,” some certainty about the project being able to qualify for the nuclear production tax credit, and a new agreement with Westinghouse for design engineering services since “the plant is their design.”

Putting all of that together would take a year or more, and only after it is completed would it be possible to begin gathering the construction team required to restart the on site work.

It would not be easy, simple or cheap, but the same can be said about most worthwhile endeavors. If the U.S. is going to restore its capability to build nuclear power plants that can compete with coal and natural gas to make us less dependent on those fuels, reviving V.C. Summer could be an important step in the right direction.