NuScale, a leader in the increasingly competitive field of advanced nuclear reactor design, has announced that the U.S. Nuclear Regulatory Commission (NRC) reviewers issued a document that formally agrees that their design does not require any electrical power to achieve safe shutdown.

It’s difficult to explain the importance of that regulatory position. People with experience in the costly hurdles associated with designing, procuring and maintaining Class 1E electrical power systems have a better chance of understanding.

Borrowing an overused, but appropriate descriptor, this step in the licensing process for NuScale is “yuuuge.”

If a NuScale power station was on the coast of Massachusetts and one or both of its grid connections failed, it wouldn’t have required a shutdown. The plant could have kept operating at low power in an island mode, ready to return to full power as soon as the grid connection had been repaired.

It means that NuScale power stations do not need to have a building full of storage batteries on site and in a seismically safe building. It means that the plant owners will not have to go through contortions to ensure that the Class 1E systems are always available with suitable redundancy even during repair periods.

The plants will still operationally benefit from reliable electrical power. There will still be codes and standards that apply to the electrical power systems to ensure conventional safety and uninterrupted ability to function and produce a valuable product. There is, however, a major cost differential between identical parts that carry a Class 1E classification with its associated pedigree and those that do not.

The specific action that the NRC took was that it issued a Safety Evaluation Report (SER) that concurred with NuScale’s Licensing Topical Report titled “Safety Classification of Passive Nuclear Power Plant Electrical Systems.”

That document describes NuScale’s approach and analysis ensuring that their reactors will be safe without reliance on any safety-related electrical power.

The NRC’s approval of a safety classification topical report that does not contain any Class 1E electrical systems is limited to the NuScale design.

The decision, however, establishes that the NRC is open to well-justified design choices that follow a path that deviates from the traditional prescriptive assumptions.

The NRC’s review of NuScale’s Design Certification Application remains on track to be completed by September 2020.

Excessive regulation of extremely low radiation doses increases the public fears of nuclear technology, increases the costs borne by society, and can deprive society of the full benefit of that technology.”
– Edward Maher, Sc.D., Harvard University
Note: Borrowed from lowdoserad.org

That is a truth that Atomic Insights has recognized for many years, but the situation – so far – remains unchanged.

They are leading the charge for the ANS and HPS to gather and organize the accumulated knowledge needed to encourage and support responsible standard-setting agencies to finally modernize radiation protection models. Part of their effort includes planning a joint topical meeting to be held from September 30-October 3, 2018. The meeting will be held in the Tri-Cities area of Eastern Washington.

Titled “Applicability of Radiation Response Models to Low Dose Protection Standards,” this meeting is being billed as being quite different from previous topical meetings.

“This is not just a ordinary topical meeting where distinguished professionals provide a paper that can be added to their dossier. Rather it is a meeting with potentially profound results for our entire industry.”

In an approach that is rare for professional society topical meetings, this one is being organized around a stated goal instead of a guiding theme.

The goal is to utilize current scientific data accumulated throughout the history of nuclear technology to update the approach to regulating the response to low level radiation doses.
(Emphasis in original announcement.)

A request for abstracts has been issued. In addition, the meeting organizers are actively seeking the contributions from recognized experts in the field. The topic list includes:

A two-page Policy Forum opinion piece titled Nuclear safety regulation in the post-Fukushima era: Flawed analyses underlie lax U.S. regulation of spent fuel by Edwin Lyman, Michael Schoeppner and Frank von Hippel appeared in the May 26, 2017 issue of Science Magazine, an outlet that has a public reputation as a reliable source of technical […]

Yesterday, the President announced his intent to fill two vacancies at the Nuclear Regulatory Commission. The White House press release names Annie Caputo, currently serving as senior policy advisor for Chairman John Barrasso (R-WY) on the Senate Environment and Public Works Committee to a seat with a term expiring June 30, 2021. As stated in […]

The Environmental Protection Agency (EPA) has been seeking input on regulations that should be repealed, replaced or modified. The comment window opened on April 13 and closed on May 15. In response to the request, members of Scientists for Accurate Radiation Information (SARI) prepared a document containing scientifically supported arguments for eliminating regulations that contain […] 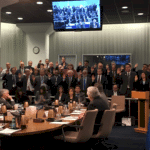 Dominion Resources’s North Anna nuclear power station unit number 3 should be approved for construction by the end of May 2017. It’s possible that the approval – in the form of a Nuclear Regulatory Commission (NRC) 10 CFR Part 52 combined license (COL) – could be issued within the next three weeks. This would be […]

Yesterday, the Nuclear Regulatory Commission accepted NuScale’s 12,000 page design certification application (DCA). That action starts the safety determination process, which is scheduled to take 40 months. Completed on December 31, 2016 and submitted to the NRC on January 12, 2017, NuScale’s certification application has been subjected to a 60 day checklist review designed to […]

Scientists for Accurate Radiation Information (SARI) recently delivered a petition to Scott Pruitt, the new Administrator for the Environmental Protection Agency (EPA). The letter, signed by 34 members or associate members of SARI, requests that Mr. Pruitt direct his Agency to revise the basis of risk-based radiation regulations. SARI members believe that regulations should be […]

Note: There is an important information update at the end of this post. Westinghouse is “unlikely to carry out actual construction work for the future nuclear power plant projects to eliminate risk.” Satoshi Tsunakawa, President and CEO of Toshiba, the Japanese company that owns Westinghouse and its CB&I Stone Webster subsidiary, made that statement during […]

Yesterday, Terrestrial Energy USA (TEUSA) informed the U.S. Nuclear Regulatory Commission (NRC) that they planned to begin pre-license application discussions with a goal of being ready to file a design certification application no later than Oct 2019. Here is a brief video that provides an overview of Terrestrial Energy‘s Integral Molten Salt Reactor (IMSRTM TEUSA […]

The Nuclear Regulatory Commission has published its vision and strategy for preparing to review applications for permission to begin building reactors that do not use light water as the coolant. Policy makers who are interested in ensuring that American reactor developers have the opportunity to lead in the nascent – but potentially very lucrative field – of […]