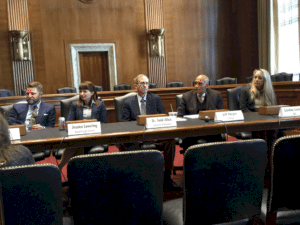 In late March, Senator Lisa Murkowski and her staff played host to some of the leading thinkers in the growing community of people who believe that nuclear energy is too important to fail without trying to do things both differently and better.

The occasion of the meeting was the introduction and release of a new study published by The Breakthrough Institute titled How to Make Nuclear Innovative: Lessons From Other Advanced Industries. The report “makes the case for an entirely new model of nuclear innovation. Instead of conventional light-water reactors financed and constructed by large incumbent firms, the advanced nuclear industry will be characterized by innovative reactor and plant designs, new business models, and smaller entrepreneurial start-ups.”

The event included a panel discussion about some of the recommendations in the report. That panel was moderated by Josh Freed from Third Way and included Jessica Lovering, the lead author of the report; Todd Allen, currently a nuclear engineering professor at the University of Wisconsin and formerly of both Third Way and the Argonne National Laboratory; Jeff Harper, Vice President of X-Energy; and Caroline Cochran, co-founder of Oklo.

Both X-Energy and Oklo are small, entrepreneurial start-up companies that are developing reactor power systems that are as different from the conventional models as Teslas are to Greyhound Buses.

Why Is An Entirely New Model Needed?

Outside of Asia and Russia, prospects for nuclear power plants in the extra-large size range seem to be dimming by the week. It has been several decades since the last project made it through the full distance marathon required to design, site, license, construct and complete a new nuclear power plant. 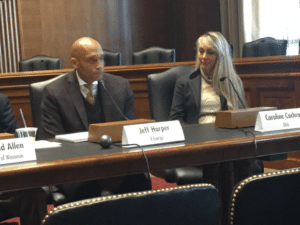 The Watts Bar units that are the most recently completed plants in the U.S. were designed, sited and licensed while I was still in grade school – and I am a semi-retired grandfather of six.

The two primary designs on which the established nuclear industry in the U.S. banked (AP1000 and ESBWR) and the single design that received most of the investments from France and Germany (EPR) are still years away from the first units being in operation, even though the design work began before or just after the turn of the century.

It can be quite discouraging to be a nuclear energy advocate.

Fortunately, the lesson that many who study the energy industry and understand atomic fission’s vast technical potential is that the old guard just hasn’t done it right. These creative go-getters aren’t pushed off into a different industry by the current struggles at Vogtle, Summer, Olkiluoto, and Flamanville. They see those projects as indicators that there has to be a better way and they are doing their utmost to devise that better way before it’s too late.

Why Not Just Give Up On Nuclear?

It may sound a little odd in a world where there are frequent messages about the inevitability of a 100% renewable energy system, or about the vast new supplies of hydrocarbons married to promoted doubts about the potential risks of climate change, but the atomic innovators honestly believe that they are working to save the world.

There are probably a few exceptions, but most of them seem sincerely convinced that human society will be much better off with accessible, proven and affordable nuclear energy options than without them. At this stage in the development of alternatives to the conventional nuclear systems, it’s not surprising to find that the leaders are motivated by more than money.

Most of them must know that there are many more paths to losing a great deal of money than there are paths to a lucrative outcome, but they are each confident that they are members of a team that is on one of the paths that leads to success.

So What Does The New Study Recommend?

The report provides the following recommendations.

It bases those recommendations on an evaluation of the successes and challenges faced by four other industries that share some commonality with nuclear power systems. The authors looked at wide-body aircraft, pharmaceuticals, hydraulic fracturing/horizontal drilling and privately designed space systems.

Three of those industries have a strong, independent, federal regulator. The fourth is an innovative energy technology that is regulated mostly on a state by state basis. All have enormous capital investment requirements, require patient investors, and benefit from various types of government support and encouragement.

The report identifies a number of reasons to be optimistic that the American nuclear industry can once again become an example for the world, possibly one that is closer to the vision that President Eisenhower had in mind when he composed his December, 1953 speech to the United Nations. Here is a description of some of the advantages the U.S. needs to harness.

The highly competitive, liberalized electricity market is already encouraging a number of nuclear start-ups to attempt to disrupt the market with more radical designs. And America’s world-class nuclear engineering programs and network of national labs are valuable assets for burgeoning innovators, as is its well-developed venture capital and entrepreneurial sector. Changing trends in national innovation systems suggest that a networked, bottom-up, privately led nuclear innovation effort might succeed where the old top-down innovation model has failed.

That should not be read as a call to dismantle the public institutions that have played a critical role in the development of nuclear energy as a clean and cheap source of electricity that still accounts for almost 20% of US generation. But to assure a future for nuclear energy in the United States and beyond, those institutions, including the Nuclear Regulatory Commission, the Department of Energy, and the National Laboratories, will need to change, expanding their missions to support private-sector innovation and facilitate commercialization of innovative nuclear designs.

What’s Missing From The Report?

One item that is missing from the report that could make a huge difference in whether or not the recommendations can be implemented and succeed is action to require that safety regulations be based on science instead of mythology. All current discussions of risk associated with nuclear energy is fundamentally based on the notion that there is “no safe dose” of radiation and that every exposure, down to a single low-energy gamma ray, carries a greater than zero probability of causing harm to human health.

That notion is false. It was imposed on the public with a carefully planned promotion campaign that culminated with a June 13, 1956 New York Times front page headline claiming that radiation was a peril to mankind. The headline was justified by a report from a committee representing the most credible scientific organization in the U.S., but that committee was stacked with people who owed loyalty to a foundation funded by the biggest of Big Oil. The chairman of that committee was the foundation employee who approved their research grants.

They were well-motivated to scare people about radiation and to overemphasize its hazards.

In the sixty years since that announcement was made, regulations have been ratcheted down to lower and lower levels while science has been discovering more and more evidence pointing to the fact that doses below certain levels are not only harmless, but healthy.

Upending the “no safe dose” basis for regulations will not be easy because there are many who benefit from the burdens that the assumption places on nuclear system development, deployment and operation. However, it is the right thing to do from a scientific and societal point of view.

Is There Hope For Action And Progress?

It’s worth noting that there is a bipartisan, multicameral effort underway to draft and pass legislation that will take steps towards implementing some of the recommendations made in this and other reports about ways to enable nuclear energy development. Both the House and Senate have bills that are making their way through responsible committees.

Republicans and Democrats, conservatives and liberals have reasons to support nuclear energy development as a way to improve the economy, improve the environment, enable poverty reduction, reduce foreign entanglements and improve global stability. The Breakthrough Institute’s most recent report does not have all the answers, but it is a report worth reading.