Though I try not to do this too often, today is a busy day. Therefore, without further ado or editing, here is a press release that Generation Atomic issued this morning. It announces actions and a product that I think you should hear about.

A slight breeze stirs the budding branches of the tree in the front yard as a student turns up the walkway and knocks firmly, but politely, on the front door. “I always knock first – ‘neighbors knock’ – and normally I would try the door bell but there are young kids here, so they might be napping,” he says as he nods toward the chalk artwork on the sidewalk. Several seconds pass by with no answer. He pulls his phone out, taps a couple of times, and turns down the walk, headed to the next house.

This is just one of several students from Penn State out this spring afternoon door knocking for Generation Atomic – or Gen A – a new non-profit supporting nuclear energy. Only these students are not the canvassers of old. They do not carry a clipboard, nor do they deliver a memorized script. “Why would we do that?” asks Tay Stevenson, Gen A’s co-founder and Organizing Director. “I don’t think I have ever met someone who enjoys being talked at. People enjoy conversations; they like to be heard and they like to share what is important to them. So that’s what we do.” 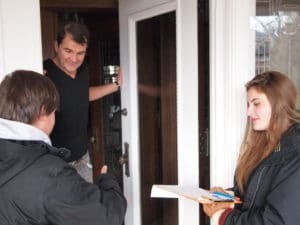 Over the course of the afternoon, topics of conversation vary wildly. Some residents want to know more about the implications of a Westinghouse bankruptcy. Others are concerned about the waste or nuclear’s safety record. Many are intrigued by nuclear energy’s role in the local economy or the environment. Some simply want to know what drew the student at the door to studying nuclear or being a nuclear advocate. “Our goal is simply to initiate the conversation – where it goes from there is always the adventure. It is amazing what people will tell you when they are authentically engaged,” explains Stevenson.

Generation Atomic has been having these conversations as part of a pilot program to demonstrate the effectiveness of door-to-door canvassing techniques in nuclear advocacy. Their results have the nuclear community on notice. So does the way they are tracking those results.

“We felt like there had to be a better way than paper-and-pencil,” says Eric Meyer, Gen A’s founder and Executive Director. “We had both worked on campaigns where smartphones could be used as digital data collectors, but this still seemed limited,” explains Meyer, “we wanted to democratize and even gamify nuclear advocacy. That’s why we developed Atomic Action.” 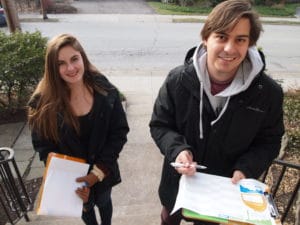 Each student or canvasser carries their smartphone with Atomic Action loaded onto the screen. The app is designed to serve as a loose guide for conversations; as soon as the homeowner comes to the door, they are handed the phone and are able to “choose their own adventure,” as the Gen A team explains it. “It makes this work way less awkward,” says one student, who estimates he has had over 50 such conversations over the course of four or five door-knocking outings. The app’s users collect points from doing advocacy work; simpler tasks like watching a video or sharing a post on social media earns the user a few dozen points, but knocking on doors can earn the user thousands of points. “It’s like Pokémon Go for nuclear advocacy,” says Meyer.

And the app could be on the general public’s phones soon. Gen A’s team is taking Atomic Action public on Wednesday, April 5th. Those interested will be able to download the app in Apple’s App Store or the Google Play Store, free of charge.

“We want people to see this as an important tool. They can use this as a way to learn more, get more involved, or, best of all, get others involved,” says Meyer. “Whether people are on the app to stand up for the largest source of clean energy, save the affordability of their energy bills, or protect local jobs and their community, Atomic Action can energize and empower normal people to do extraordinary things.”

Generation Atomic is a non-profit organization that advocates for nuclear energy. Questions can be directed to gena@generationatomic.org.