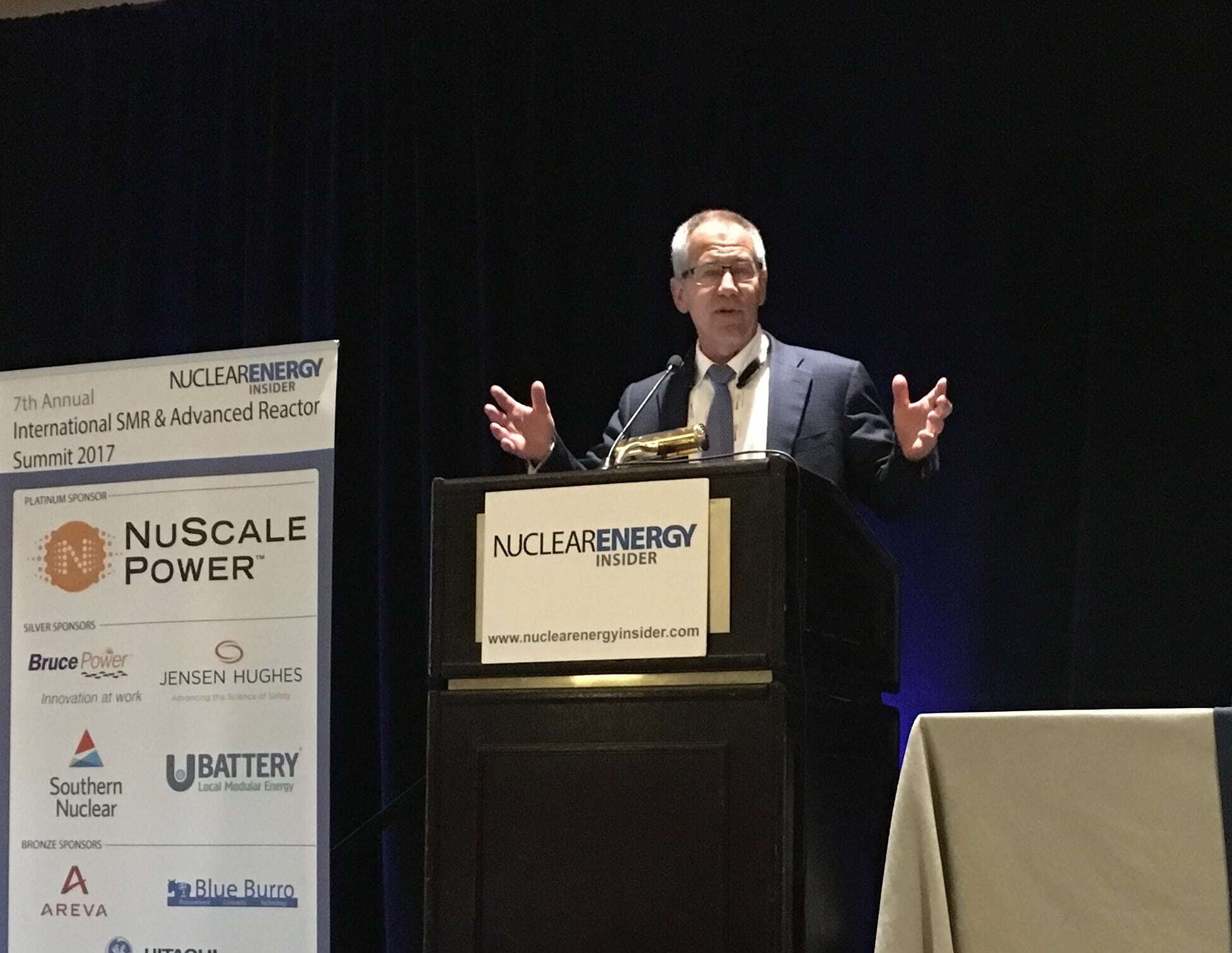 Attendees at the 7th Annual International SMR and Advanced Reactor Summit in Atlanta, GA were intensely curious about the effect of Westinghouse’s decision to enter into a Chapter 11 bankruptcy reorganization effort. They are also working hard to learn whatever lessons might be available to help them avoid similar situations.

What About That Westinghouse News?

Westinghouse has been a major nuclear energy company since the earliest days of the technology development. When Toshiba purchased the company a decade ago for $5.4 billion, it was seen as an indicator that the company believed in the future of nuclear energy in the United States.

Like almost everyone with a nuclear energy industry connection, many believe that the Chapter 11 filing is a big deal. Some feel certain that it will have an impact on their future. The problem is that no one has any real comprehension about what the effect will be. Sighs, laments and shoulder shrugs are common responses when the subject is introduced into a hallway conversation.

One of the attendees at the meeting left Westinghouse employment several months ago. When asked for a reaction about the decision to change jobs, the former employee stated that cartwheels might be in order if in different attire and if young enough to still be capable of cartwheels. Interpret that response as an expression of relief about not being personally involved in the angst that must be widespread within the company.

There do not appear to be any current Westinghouse employees at the event; Westinghouse made a decision a couple of years ago to put its SMR project on the shelf in order to concentrate its management focus on the more immediate opportunities to either build, maintain or take apart – decommission – large pressurized water reactors.

One attendee, Marvin Yoder, reintroduced himself and asked if I’d like a copy of his short book about his participation in an project attempting to introduce nuclear energy to the Alaskan “bush.” That started a reminiscence about Toshiba’s aborted effort to introduce a factory manufactured, 10 MWe nuclear power plant that could operate for 20-30 years without new fuel.

Four units under construction in the U.S. southeast have run into such lengthy and costly delays that Toshiba has recognized that the obligations of fulfilling the construction contracts represent a financial loss of roughly $6 billion. The bankruptcy filing is designed to cap that liability and protect the parent company.

A number of deeply experienced industry leaders at the summit have expressed some frustration and confusion about how the four projects could have gotten so far behind their projected schedules.

Several expressed the opinion that Toshiba and perhaps even Japan has an obligation to do whatever it takes to complete the projects. Those sentiments echoed a paragraph found in yesterday’s issue of the Atlanta Journal Constitution.

Southern Co. CEO Tom Fanning, who flew to Tokyo ahead of Westinghouse’s bankruptcy filing, told the Wall Street Journa;l that thousands of Georgia jobs could be endangered if Toshiba doesn’t commit to paying billions in cost overruns.

“The commitments are not just financial and operational, but there are moral commitments as well,” Fanning told the Journal in an interview from Tokyo.

The situation cries for a higher level of understanding, blame sharing and cooperation. Without a serious effort to better recognize how the situation developed, it is fraught with the risk of every party to the project losing a great deal of money. It also presents the prospect of having four large, incomplete, and unproductive works of industrial art.

Projects that last for as long as building nuclear reactors in the U.S. are roughly analogous to extreme endurance competitions in which overall progress is the sum of all stages of the race. There is no magic reset button that allows recovery of time lost early in the race, even though the specific events that resulted in the lost time might have been forgotten by observers.

After conversing with a number of people at the summit, including a brief question and answer session with Steve Kuczynski, Southern Company’s Chief Nuclear Officer, it became apparent that it’s worth repeating a story about a major event whose effect on project cost and schedule should not be underestimated.

The June 12, 2009 edition of the Federal Register gave notice of a seminal event in the sad saga of the U.S. AP1000 projects. Titled Consideration of Aircraft Impacts for New Nuclear Reactors; Final Rule, the announcement required a major redesign of the already certified AP1000. The rule was not applied to any existing facility or to any facility for which a construction permit had already been issued. Here is a key excerpt from that final rule.

In making these additions, the NRC is making it clear that the requirements are not meant to apply to current or future operating license applications for which construction permits were issued before the effective date of this final rule. This is because existing construction permits are likely to involve designs which are essentially complete and may involve sites where construction has already taken place.

Applying the final rule to operating license applications for which there are existing construction permits could result in an unwarranted financial burden to change a design for a plant that is partially constructed. Such a financial burden is not justifiable in light of the fact that the NRC considers the events to which the aircraft impact rule is directed to be beyond-design-basis events and compliance with the rule is not needed for adequate protection to public health and safety or common defense and security.”

The unrecognized implication of issuing this rule and choosing to apply it to projects that had not yet been issued a construction permit is that AP1000 projects had already passed several important decision milestones that made them vulnerable to exactly the kind of unjustifiable financial burden that the NRC stated that it was trying to avoid.

The sales team had already successfully sold the certified AP1000 design to two customers. Though the detailed design was not yet complete, and though no concrete pours or metal forming had begun by June 2009, the plant design was complete enough to provide the basis for a cost estimate. That estimate was solid enough to pass muster with several boards of directors and two public service commissions.

That is no small task for multi-billion dollar projects, especially those that are as controversial and as visible as firm priced orders for the first new nuclear plants in the United States in more than thirty years.

Here is a quote from a document describing the Vogtle 3 and 4 projects to Southern Company customers.

Remember, the notice applying the requirement for an aircraft impact assessment, and making appropriate design changes to mitigate the projected effects of such an impact was not issued until three months after the Georgia PSC had invested six months into the review and approval of the project as described in the NRC issued Design Certification Rule for the AP1000.

It is difficult to put a precise figure on the time that the project consortium invested into the cost and schedule analysis before submitting it to the PSC, but it was probably no less than a year’s worth of work.

Those and other related issues were not completely resolved until the issuance of the final design certification document in late 2011, more than 2.5 years after the PSC had approved the project using the previously approved design revision.

During that delay, engineers who should have been working on the detailed design so that it could be as complete as possible before construction start were diligently working on the revisions to the regulated parts of the design that they thought was already complete.

Since the changes had a significant impact on the facility structure, they altered the seismic analysis and had a substantial impact on the design of the foundations.

Why Did Project Participants Soldier On Instead Of Complaining?

As an outside observer, I cannot explain why the damaging decision was meekly accepted without either strong resistance or a complete revision to the project cost and schedule projections. Major components of the assumptions made for the cost estimates were invalidated by the design changes required to satisfy the regulators.

There were other contributing missteps in the nearly eight years that have elapsed since the NRC issued the Aircraft Impact Rule. It is difficult to imagine a reasonable resolution to the current situation that does not include an acknowledgement – along with some kind of financial contribution from the responsible parties – that the decision had a significant and unrecoverable impact on both cost and schedule.

There are many stories on the web this week about cost overruns at Vogtle and VC Summer, the two active new nuclear power plant projects in the United States. TVA has also had well publicized cost increases and schedule delays at Watts Bar II, a construction project that was started more than 30 years ago…

Many of my friends and colleagues in the nuclear energy community think I’m am on a quixotic mission. Though I have not made any decision on how to vote in November, Bernie Sanders is the candidate who is currently delivering messages that align with my thoughts on the direction that the US needs to move…

Third Way bills itself as a centrist think tank that is not satisfied with just thinking; they take action that gets results. Wednesday’s (Jan 27, 2016) Advanced Nuclear Summit and Showcase provided an excellent example of Third Way’s ability to seek common ground among people from both major political parties in the United States. The…

Managing any business is hard work, especially during a global pandemic with stay-at-home orders in place. It requires creativity and flexibility along with some amount of prior preparation. On May 11, 2020, I gathered a group of representatives from several start-up companies that are developing advanced nuclear technologies to talk about how they are making…