As part of its Nuclear Option Special Section, MarketWatch included a video interview with Aude Lagorce asking Ben Ayliffe of Greenpeace for his opinion about whether or not nuclear energy is “green”. Not surprisingly, Ayliffe strongly disagreed with the characterization of nuclear energy as “green”; his organization has been professionally engaged in opposing nuclear energy development for many years.

The judgement of the greenness of any particular technology is subject to debate and can be considered to be a matter of opinion. Some people might actually like the sight of the massive industrial facilities required to capture wind in near coastal waters or the looks of a solar power tower collection system. All those bright shiny mirrors can be described by some people as environmental decorations. (There is no accounting for taste.)

However, MarketWatch is a publication that aims to serve the needs of people who invest real money and expect to obtain a return on their investment. They might allow for people to have different opinions about the attractiveness of any particular product, but they should at least get the dollar figures right. During the interview, Ayliffe implied that offshore wind was a cheaper alternative than nuclear energy. 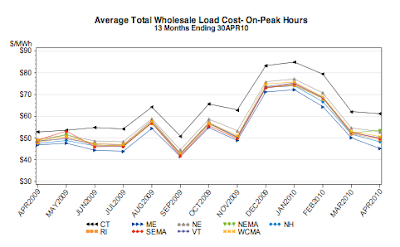 I offer the following fact – Cape Wind and National Grid recently signed a power purchase agreement for 50% of the power that might be produced by the proposed off-shore wind farm. The federally subsidized price for wholesale electricity in 2013 in the agreement is $207 per megawatt-hour with an escalation schedule of 3.5% per year for 15 years. (If the project does not qualify for federal subsidies, the prices go up accordingly.) The wholesale price for peak power in the New England region has recently varied from $40-85 per megawatt-hour. The above graph shows the price history from the New England Independent System Operator (ISO) for the 13 months ending in April 2010. The nuclear plants that are operating in the region are operating in excess of 90% capacity factor and selling their power for less than the peak rates.

How is power coming from offshore that costs $207 per MW-hr “cheaper”? How is power that is contracted for a 3.5% per year price escalation going to get cheaper with more experience? These prices for offshore wind power are not just an American phenomenon, at least not according to Europe Boom in Offshore Wind Could Become a Bubble Unless Installation, Running and Repair Costs Are More Clearly Defined.

The only way that this kind of power system will be able to compete in the market is if there is a government mandated set-aside. When the people paying the bills wake up and figure out that the only reason that their electric supply utility is interested in purchasing this power is because their elected officials have forced the utility to be interested, they are going to revolt. The special market situation that might enable profits could disappear with the banging of a gavel on a vote in the state legislature, causing investors to lose their money.