When the business publications start paying attention to nuclear energy, it shows how close we are getting to a true recovery of the large and growing enterprise that was the source of so much promise when I was in high school and making career decisions. Perhaps that is one reason why the professional anti-nuclear crowd is cheering small victories so with so much vigor. Their press releases remind me of another part of my high school memories – during my senior year, my school’s football team compiled a record unspoiled by a single victory. The team went 0-10, but we sure cheered loudly and did some high fiving when they scored one of their rare touchdowns.

On May 20, 2010, MarketWatch.com published a special report titled The Nuclear Option. Here is the way that they summarized the report: “Ballooning energy needs, volatile fossil-fuel markets and worries about global warming are pushing countries around the world to reconsider nuclear power. In this special report, MarketWatch examines the nuclear industry’s global renaissance and tells investors how to take advantage of the trend. (Emphasis added.)” 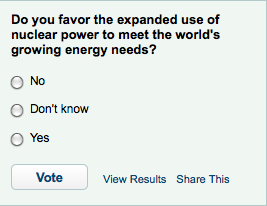 When private investors start looking for ways to take advantage of technical trends, you often see rapid progress and support for changes in the rules that inhibit progress. When there is no private money involved, bureaucracies move at a different pace than they do when pushed along by the pressure of people who want to see some return on their investments. 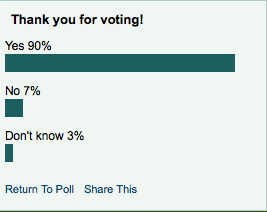 There is a highly unscientific poll associated with the Nuclear Option Special Report. The sample is limited to people who both visit the page and take the time to register a vote, but even so, I thought it would be amusing to show you what I saw when I voted. The poll simply shows that I am not alone in the world – there are other people who agree with me and believe that nuclear energy has a big role to play in the world’s energy market.

The saddest news in the collection of stories was that there are not very many nuclear “pure plays” anywhere in the world that are not already owned by the country of origin. Kepco, Areva, China National Nuclear Corp., China Guangdong Nuclear Power Holding Co., Rosatom, and China Power Investment Corp. are all state-owned companies with a limited amount of participation allowed by private companies. The large Japanese manufacturing companies like Hitachi, Toshiba and Mitsubishi Heavy Industries (MHI) are all well diversified companies where nuclear is just a portion of the mix. GE is even less of a nuclear play than those companies since its nuclear energy business units represent only about 2% of the company’s annual revenues.

Perhaps there will be some initial public offerings of companies whose fortunes are more closely tied to their nuclear related products that we will all be able to follow in the not too distant future. It is worth the effort to stay informed about the opportunities:

There is a tigerlike market out there right now of aggressive capitalist activity that is occurring in anticipation of a huge growth in the global nuclear industry,” said London-based John Ritch, director general of the World Nuclear Association, or WNA, an association comprising 180 companies that represents the global nuclear-energy industry. He said major companies are competing to claim a role in the supply chain.

“In the 21st century, the nuclear industry will build hundreds, then thousands of power reactors worldwide.” Ritch added. “You can see the activity most vividly in India and China, which have the world’s two largest nuclear construction programs. But nuclear reactors will be built in at least 40 other countries.

While you are thinking about the possible investment plays, you might want to do some additional reading about the technologies and the politics associated with nuclear energy. A good sampling of recent articles and blog posts can be found on Nuclear Green, where Charles Barton is hosting the second of a series of nuclear related blog carnivals. Just in case you missed it, you can find the first in the series on NextBigFuture.com at Carnival of Nuclear Energy Number One.