Andrew Revkin posted a thought provoking blog yesterday titled Bringing Responsible Oversight to the Gas Drilling Boom on the New York Times hosted Dot Earth blog. In that post he agreed with those who have recognized the need for responsible regulation of the rapidly expanding industrial activity using using hydraulic fracturing for natural gas extraction.

There is an interesting thread of comments developing in response. Here is one that I thought offered the opportunity for a detailed response that might expand the vision of a group of people who have operated with blinders on. Here is the comment from Sere in NYC that inspired me to respond:

So you “greens” want to destroy the *natural gas* industry in exactly the same way you destroyed nuclear in the US? 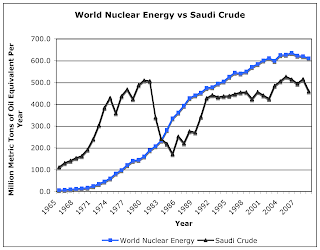 That comment is short, to the point, but hopelessly misguided from my point of view. My response required almost every one of the 5,000 characters that the NY Times comment system allows, so it might not make it through moderation. However, I thought it was worth sharing with you.

My contention is that it was not “greens” who destroyed the nuclear industry – even if some of them would love to be able to claim credit for that action.

No, tying down the Gulliver of atomic energy in the land of the Lilliputians required the cooperation of people with wealth and power who understood the value of marketing campaigns, who understood the immutable laws of supply and demand (too much supply of a commodity like energy inevitably leads to much lower prices compared to a situation of a bit less supply than the market demands), and who understood how to add cost to their competitor by establishing an unwieldy and legalistic regulatory agency.

In the early days after the discovery of the fission self-sustaining reaction, the fossil fuel dominated US government declared an absolute and strictly enforced monopoly that included the death penalty for sharing information among scientists and engineers. That monopoly was lifted by a far seeing President who understood the importance of energy because of his extensive professional experience as an energy consumer (Ike). For a time after the Atomic Energy Act of 1954, the technology grew with a reasonable pace to begin to threaten the domination of fossil fuels in the market.

At one time, Ike even used his technical understanding of the incredible potential of atomic energy to convince King Saud of Saudi Arabia to presser Nasser to end the 1956 Suez Crisis. As his envoy explained, scientists and engineers understood how to release a vast quantity of energy from uranium fission. They had shown Ike how the ability to release so much energy from such a small mass of previously unvalued material could make petroleum essentially worthless. (The episode of Robert Anderson’s trip to Saudi Arabia as a special envoy is described on page 488 of Daniel Yergin’s The Prize: The Epic Quest for Oil, Money and Power.)

During the period from 1963-1973 construction began on every nuclear plant operating in the US today. The coal and gas industry – well connected with all other fossil fuel interests through various trade associations and interlocking multinational corporations – recognized the trend. They could read the reports from the Energy Information Agency indicating that they would be out of business by 2000 if they did not do something.

One of the important actions was to work politically to eliminate the Joint Committee on Atomic Energy and to break up the Atomic Energy Commission into a strict regulatory body and a leaderless group of researchers who drifted between several federal agencies before being put into the newly formed Department of Energy where their projects would compete for funding with all other energy sources – including those promoted by the politically powerful fossil fuel industry.

The activities of the “greens” against nuclear energy has been just a cover for the competitive actions by the fossil fuel industry that do what competitive commodity suppliers always try to do. Those actions added cost and delays to their competition in hopes of keeping as much market share and pricing power as possible.

Just imagine what that number might be if there had not been such a well-funded, politically supported and strategically well-conceived campaign of FUD against fission. It strains credulity to attribute that effort to the actions of sign waving protesters wearing sandals and chanting slogans.

Those visible attackers had to have a lot of help behind the scenes to effectively tie down a source of emission-free energy where a single 9 gram pellet about the size of the tip of my pinkie contains as much heat energy as a ton of coal, or 17,000 cubic feet of gas or 147 gallons of crude oil. It boggles my mind how an industry that knows exactly where all the waste it has ever produced is stored has a “waste issue” while one that constantly dumps waste out of smoke stacks gets a free pass.

In case you think it was “the media” who provided that support, think about the number of oil company commercials you have seen in your lifetime. Remember just where the advertiser supported media gets its bread and butter.