Yesterday, on International Women’s Day, the Senate Environment and Public Works (EPW) committee held a hearing that provided both visible and audible proof that times are changing in the political and public acceptance of nuclear energy.

A large majority of the Senators who offered opening statements at the hearing expressed their strong support for nuclear energy, for the need to enable innovators to address the remaining issues associated with the technology and for the need to reform the Nuclear Regulatory Commission’s licensing framework and funding mechanisms.

Many specifically expressed their pleasure at working on “something we all agree on.” It is becoming almost a meme – a most welcome one – that in today’s divisive political environment, one area of common interest where positive action is possible is in relation to enabling nuclear energy to regain its industrial strength and fulfill its technological promise.

There was a general recognition that the nuclear regulatory commission has a creaking licensing framework that is especially tuned to maintaining safe operations of existing nuclear plants but that is overly prescriptive, unpredictable and not usefully phased in support of efficient and effective reviews of new technology.

Senator Whitehouse (D-RI) was especially enthusiastic about the very real promise of turning “nuclear waste” in the form of slightly used fuel into a vast energy resource. He was also concerned about the fact that the current market assigns no monetary value to nuclear energy’s emission free, high quality, dependable power.

Senator Ed Markey (D-MA), an aging antinuclear politician who has been scheming since 1976 to add as many burdens on nuclear power plant owners as possible, devoted his allotted time to taking credit for post 911 changes in nuclear plant security requirements that result in hugely expensive “force on force” monitored exercise requirements.

He stated that he drafted those requirements in response to 911 – an attack on tall or very large buildings using hijacked commercial airliners – which is a complete non sequitur to anyone who gives the premise any thought. He also claimed that the bombing of the Boston Marathon proved that nuclear plants were high on the list for terrorist attacks. He concluded his illogical rant by asking Ms. Korsnick to commit the NEI to supporting the continuation of requirements for the exercises to be conducted and for them to be monitored and graded by the NRC.

Markey claimed that any effort to reduce the extent and expense of these exercises would be akin to allowing students to both take home their tests and to grade their own work. I have no idea why someone hasn’t firmly explained to the Senator that constant readiness to prevent squads or platoons of heavily armed terrorists from attacking the United States is not a private industry responsibility.

Senators from Wyoming and Nebraska were both interested in the overall health of the nuclear industry as it related to their state’s status as important uranium suppliers.

Senator Barrasso probed the DOE’s handling of its surplus uranium stockpile. Ms. Bawden, from the GAO, provided testimony about reports that her agency has completed in which they determined that there were both weaknesses in the way that the program was managed and also apparent violations of various legal requirements.

The GAO has offered a legal opinion that the DOE is not in compliance with laws that require ensuring surplus uranium sales do not negatively impact the uranium market and a more generally applicable law requiring that agencies that collect miscellaneous receipts turn the proceeds over to the U. S. Treasury. The DOE has challenged those opinions.

Sen Barrasso is concerned that the DOE’s sales during a time of market oversupply – termed a glut in a Wyoming newspaper headline – not only harmed the struggling producers in his state but also netted the US government an inadequate return. He didn’t say it this way, but the DOE bought high and sold low, apparently under pressure to alleviate a budget shortfall in a favored program without having to explain its management decisions to Congressional appropriators.

Ms. Korsnick and Dr. Finan provided solid, technically accurate and optimistic testimony about technological advances in nuclear energy and the promise that might be achieved by combining old ideas about fuels, coolants and configurations with improved materials, sensors, displays and control systems.

Dr. Back’s testimony was a little disappointing, but not unexpected considering the source. GA has stated that it believes that reactors should not be considered to be “advanced” unless they meet all four of GA’s recommended criteria. Those statements of recommended “improvements” are overly prescriptive and focused on prioritizing GA’s existing technology interests.

Predictably, Dr. Lyman explained that while his organization claims to be neither pro- nor anti-nuclear, they are opposed to any changes in the NRC that would make licensing or oversight any less costly or any more predictable. They would support changes that increase the burden, however. As support for my evaluation of General Atomics’s recommendations, Dr. Lyman complimented Dr. Back and stated that UCS agrees that all four should be required for any advanced reactor design.

Lyman also stated that the UCS is not in favor of any effort to turn “nuclear waste” into valuable fuel because that might lead to more use of nuclear energy and greater risks that someone, somewhere might decide to take the tortuous path of using reactor grade materials with their complex mixture of various fissile and fertile isotopes to create a weapon instead of taking the easier, tried and true method of simply mining natural uranium and enriching it to weapons grade material.

Watching yesterday’s hearing made me proud and excited to be a nuke and a little regretful that, like Dr. Lyman, I am an aging graybeard.

Though I have often received quizzical, almost uncomprehending looks from my type ‘A’ colleagues on submarines and in my other jobs, I’ve often been guided by a simple principal of decision-making – “If it’s too hard, quit.” Please don’t think that means I’m the type of person who can never get anything done or who… 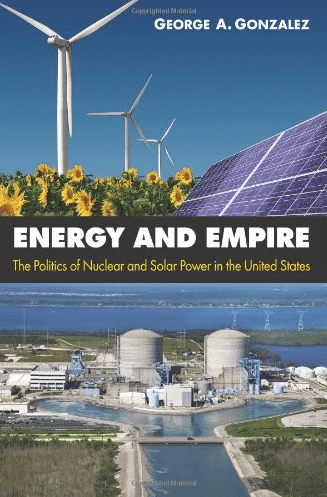 Dr. George Gonzales is an associate professor of political science at the University of Miami. In 2012, he published a book titled Energy and Empire: The Politics of Nuclear and Solar Power in the United States. In his book, Professor Gonzales recognizes that the development of nuclear energy poses an obvious threat to the continued…