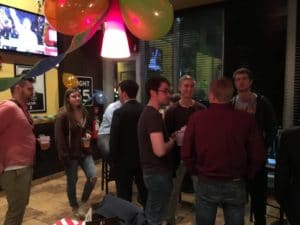 Generation Atomic hosted a launch party for its newly available nuclear advocacy app – Atomic Action – with an appropriate spread of apps [appetizers] at TGI Fridays on 5th Avenue in Pittsburg.

Timed to coincide with the annual American Nuclear Society Student Conference, the launch party attracted an enthusiastic group of about 40 twenty-something activists plus one old-guy gate-crasher. (He took the photos for this piece and is too old-school to think about selfies.)

I spoke with contingents from the University of Florida, the University of Pittsburg, Purdue, Texas A&M, and Virginia Commonwealth. I probably missed a few; perhaps they could chime in here to add to the list. 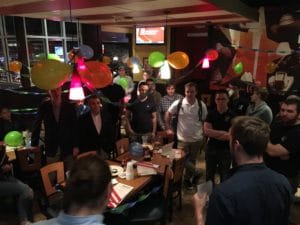 All were there to meet and greet like-minded people, have a few beverages – adult for those who could pass the ID screen – share some sponsored apps and talk about why they have decided to be active and promotional about their interest in nuclear energy.

Tay Stevenson and Eric Meyer, the co-founders of Generation Atomic, described their passion as hard core environmentalists who firmly believe that nuclear energy can save humanity from the scourges of other power sources. They acknowledged, however, that there are plenty of other good reasons to support nuclear energy and they would not reject anyone else’s motivations.

They introduced their team, which includes activists, organizers, a visual artist, a web developer and even an opera singer.

The free Atomic Action app is available for download. I’ve got it on my device and will be learning to use it over the next few days. It’s a great idea and a good way for technically minded nuclear energy experts to use modern communications and data collecting technology.