Attending an ANS (American Nuclear Society) Student Conference is one of my favorite ways to reinforce my faith in humanity and to stoke my excitement about the future of nuclear energy.

This year’s event, Dispelling Nuclear Myths – hosted by the ANS chapter at the University of Pittsburg – has been a wonderful addition to my library of memories and growing contact database.

Though some of the speakers have introduced some of the angst that is currently common among people who are already embedded in the nuclear enterprise, the students have been almost universally optimistic and enthusiastic about their future. They are fascinated by understanding the history, looking at the wide range of available opportunities, applying new technologies and figuring out ways to avoid the errors of the past – both forced and unforced. 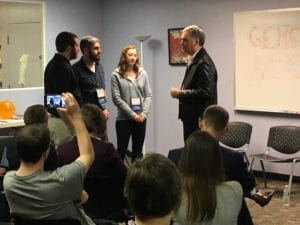 As a precursor to the formal meeting, I joined in with Generation Atomic for their Atomic Action app launch party and the advocacy workshop that they held on the following day. We heard from two experienced political leaders, one who has had a lengthy career in Pennsylvania government as an appointed official focusing on energy, environment and water and one young staffer who works for a congressman who has a nuclear plant in his district.

Those speakers helped make role playing exercises in advocacy even more valuable by adding a health helping of reality. Generation Atomic is doing work that the nuclear enterprise needs – they are helping to lay the foundations of support for the technology that will enable success in times of need or stress. We can only hope that the efforts are not too late and that the industry recognizes – with real financial commitment – the need to build bases in advance of actual need.

The actual conference kicked off with a dinner highlighted by both a pre-dinner and after dinner speakers. John Kelly, the chief technology officer for DOE’s nuclear energy organization provided a positive message of excitement for advanced reactors, smaller reactors and DOE support for progress via the national labs and the Nuclear Energy University Program.

He also recognized that there is continued interest in addressing the nuclear fuel cycle, including finding ways to recycle and reuse the lightly used material that has been put through reactors one time so far.

Mike Kurzeja, an energetic engineering leader who I met several years ago when he was leading the North American Young Generation in Nuclear organization, provided fascinating insights into the ways that Exelon is using technologies like video streaming, improved sensors, robotics and smartphones to make improvement leaps in their operational and maintenance activities.

Before dinner, I gravitated to a group of young men and women wearing Service Dress Blues and representing the U.S. Naval Academy ANS chapter. They were enthusiastic about their decisions to choose submarines or aircraft carriers, happy about their early selection bonuses and happy that the Academy had [finally] begun offering nuclear engineering as a major.

My dinner companions introduced themselves as being from Texas A&M. When I started the “do you know” game, they revealed that they attended the Kingsville campaus and did not have much contact with the professors or students at College Station. It was welcome news to me that there was a second campus for Texas A&M. Several of them told me that they were inspired to select the nuclear engineering track because of various contacts with the South Texas Project.

Following dinner, the hosts had arranged a social event at a local dueling piano bar called Howl at the Moon. The musicians got the crowd hopping. Some of the students showed off some impressive dance moves while others displayed a little less talent on the karaoke mikes.

A few attendees – both students and professionals – proudly showed me some cell phone photos the next day. I overheard a large number of positive comments about the quality of the event as an icebreaker.

The first day plenary session was a bit unusual, but quite informative. It included two primary speakers that described different aspects of the Iran Nuclear Deal and helped the students to understand some of the nuances that haven’t been well described in the media.

Robert Goldston, a professor at Princeton University, attended via Skype after his flight was cancelled. I was impressed at the smoothness with which the backup plan was implemented; there was no fumbling and no excuses. Everything worked as it was supposed to as one might expect with a conference full of nuclear engineers. 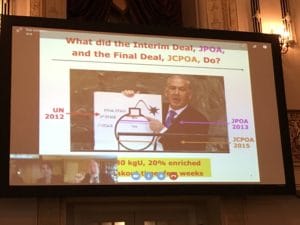 Goldston started off his talk with a slide depicting Israeli Prime Minister Netanyahu and his famous “Wiley Coyote” bomb designed to increase awareness about the close approach that Iran was making towards having enough weapons grade material to construct a bomb. He went on to explain some of the detailed technical considerations and trade offs made to accomplish the political goals of providing time to breathe, implementing measures that would increase the “breakout” warning time and implementing measures that would provide constraints over a long period of time.

Corey Hinderstein, from the National Nuclear Security Administration, provided information from the political point of view. She started off by providing her organization’s current marching orders of strict implementation of the deal’s provisions, expecting no less from Iran and providing no more concessions from the U.S.

After the plenary I spent several hours wandering the career fair that is a regular component of these conferences. There were representatives from a dozen or more university programs providing information about graduate school and fellowship opportunities. National labs were well represented, with some having several separate tables for various programs within the labs. There was information about internships, cooperative programs like the National Science User Facilities and post doc opportunities.

Here is a reminder for students – by April, most internship programs for the coming summer are full. Student conferences are a great time to find out about programs for NEXT summer.

Some of the more active tables at the fair were those of the companies looking to meet good candidates for new hires. Entergy, Exelon, BWXT, Westinghouse, First Energy, Areva, Southern, Dominion and Holtec were some of the companies where I stopped to chat with the people manning the tables.

I spent a good deal of time talking to the people from Naval Reactors, the Navy Nuclear Lab [which is the new name for the cooperative combination of what used to be two competitive labs – Bettis and Knolls – that are now operated by a single contractor] and the Navy Recruiting Command.

A fair number of students at the conference have actively sought me out to talk about their interest in the Navy Nuclear program. I’m always happy to share some of what I know. It is, in my opinion, one of the best ways to obtain deep operational knowledge of power plants with features that will be more useful as nuclear developers seek to enter markets outside of large, central station, base load power plants. 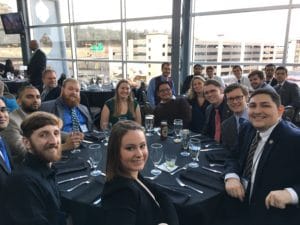 Contingent from VCU at the 2017 ANS Student Conference. In banquet facility at Heinz Field

Though the dinner speakers on the second day were not as energizing as those of the first day, I thoroughly enjoyed the opportunity to chat with students and professors from Virginia Commonwealth University (VCU).

Following dinner, Dr. Sama Bilbao told some of her colleagues and students a funny story about a slightly kooky guy who drove from Florida to Wisconsin to attend the ANS student conference in 1995. He was there to tell the students about his company’s unusual ideas that reactors should be much smaller, should be made in factories, could use coolants other than light water and should be designed to serve markets other than central station electricity generation.

She then revealed that the kook’s company was called Adams Atomic Engines. I guess I have been attending these student events for quite a while.