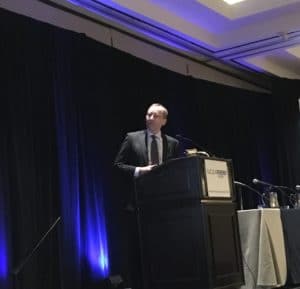 What Is Terrestrial Energy Doing To Move Its Design To Market?

His company is developing an Integral Molten Salt Reactor (IMSRTM). He noted that he had last provided information to the Nuclear Energy Insider (NEI) annual summit two years ago when the event occurred in Charlotte, North Carolina. During the period since that report, his company has been making steady progress towards commercialization.

Terrestrial Energy has a specific way of defining progress towards commercialization in the nuclear energy development enterprise.

So we think we are able to put up our hand and say that we are seeking to commercialize our IMSR by taking the necessary regulatory action to support our deployment timetable, which is in the 2020s. We are seeking to be able to commission our first power plant for our first customers in the 2020s at sites in Canada and the United States.

Terrestrial Energy has entered into the first phase of the reactor regulatory process in Canada by deciding to submit its design for a vendor design review in February 2016. That process, which is scheduled to be completed 18 months after acceptance, is a voluntary step that developers can take to obtain “an overall assessment of the vendor’s nuclear power plant design against the most recent CNSC design requirements for new nuclear power plants in Canada.”

Terrestrial Energy USA has also notified the U. S. Nuclear Regulatory Commission of its intention to submit a design certification application during fiscal year 2019.

The licensing activities are supported by a team of about 40 engineers and license specialists who are focused on completing the required product engineering and taking the necessary regulatory steps in a phased manner so that they can provide an increased level of certainty for their investors.

What Is Terrestrial Energy’s Business Case?

Irish emphasized that Terrestrial Energy is in business because it has determined that its advanced small modular reactor, the IMSR, is a “better way to generate heat compared to fossil fuel combustion.” Their product is not limited to generating electricity; electric power generation is only one of several different markets for the high quality, 700 ℃ heat that can be provided by the system’s tertiary salt loop. According to Irish’s presentation, it is possible for heat customers to be located up to several kilometers from the reactor. 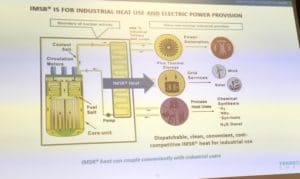 Presumably, the cost of installing and operating piping and pumps required to move the salt through the system adds an affordably low cost to the heat supply effort. It should be obvious that the optimal distance between the heat supply and the heat consumer would be as short as possible after taking into consideration the safety and security needs of both the reactor plant and the heat customer.

According to Irish, an advantages for heat from an IMSR compared to heat from combustion is the reduction in emissions and combustion waste disposal. Both during his presentation and during the brief Q&A session that followed, Irish disclosed that one of the markets where participants have expressed the most interest is in petrochemicals.

A vast quantity of heat is consumed in refining petroleum and in extracting unconventional crude oil from reservoirs like Canadian oil sands or Colorado shale rock. A questioner who identified himself as a consultant who had focused primarily on oil and gas pointed to Royal Dutch Shell’s recent aborted effort to extract and process kerogen, which requires heating reservoir rocks to about 600 ℃ for three years. He asked Irish if the IMSR could be a cleaner and cheaper source of heat for this kind of unconventional extraction.

Irish: To answer your question fully requires an additional bit of analysis that I can’t really respond to, but what I will say is that it’s slightly ironic, if you are an environmentalist, that the closest industry in terms of needing the heat that we generate is the petrochemical industry, particularly in the context of providing great amounts of heat to cook fossil fuels out of non-traditional oil plays.

Irish also described hydrogen production as a key target market, noting how it is already a product that is consumed in large commercially interesting quantities in the process of upgrading inferior grades of crude oil to produce more useful products like gasoline and distillate fuels.

I think the jewel in the crown here, for coupling nuclear heat to industrial processes is coupling to hydrogen production. And we’ve done some work on coupling the heat from our integral molten salt reactor to a process that creates hydrogen. And the interesting thing about that is, even though natural gas in North America is one of the most competitive sources of BTUs in the world, we are pretty close to being cost competitive with steam methane reforming, which is the standard methodology today, with high temperature steam electrolysis driven by IMSR heat and power.

He noted how synthetic fuel production can also combine coal with hydrogen from water or natural gas to produce clean, domestic distillate fuels. If done in the traditional way with heat input from burning part of the carbon input, it is an emission-intensive process, but the IMSR heat would avoid a major source of emissions.

The petrochemical industry is not the only target market for vast quantities of heat or a combination of heat plus electricity. “Desalination,” Irish said, “is a very important sector for our technology.”

To conclude, we think our IMSR has the potential to reorder a $5 trillion market, global energy market, and be be truly disruptive against fossil fuels in that market over the next 30 years. The advanced small modular reactors are capable of serving many new customers. And this is the growth opportunity for the industry.