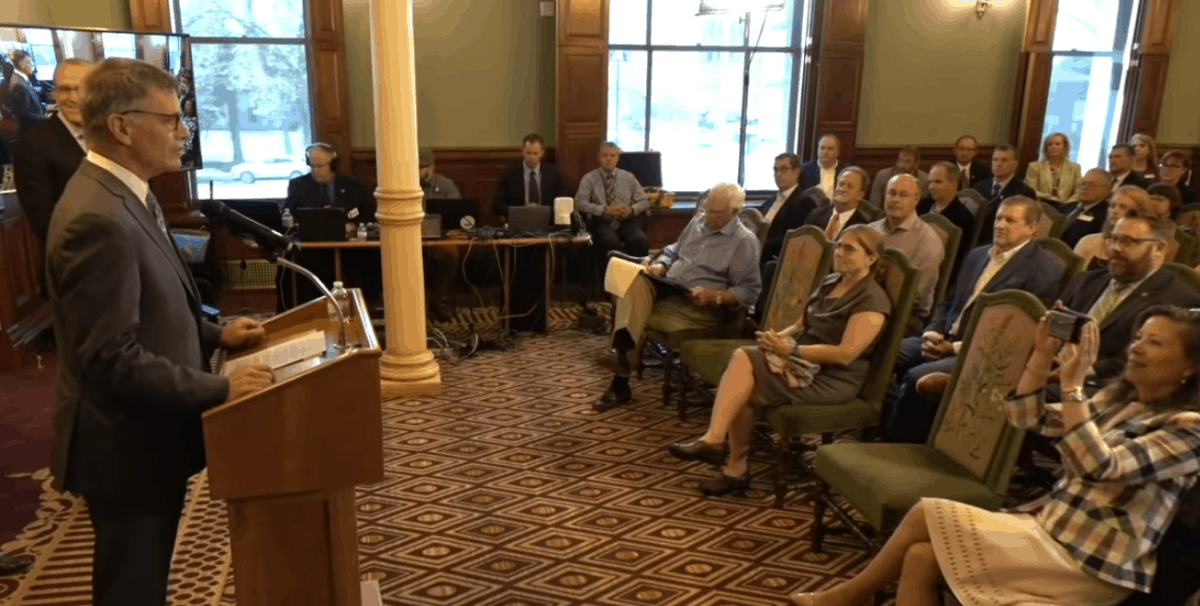 Many of those who care about finding solutions to the physical distress that our climate is experiencing, as reported on this week in a landmark 1,300 page report by the IPCC‘s Sixth Assessment Working Group 1 (Climate Change 2021: The Physical Science Basis), are not looking at Wyoming.

But based upon the announcement made in early June by Wyoming Governor Mark Gordon, together with senior Senator John Barrasso, Secretary of Energy Jennifer Granholm, TerraPower founder and Chairman, Bill Gates, President and CEO of Rocky Mountain Power Gary Hoogevene and others, maybe they should.

In a well-orchestrated 30-minute event, Wyoming’s political leadership, while making no bones about their total support for coal, announced that Bill Gates’ advanced nuclear venture, TerraPower, had selected Wyoming and a yet-to-be-determined retiring Rocky Mountain Power coal plant, as the site to build and operate the first sodium-cooled advanced Natrium™ reactor, with matching funding from the DOE’s ARDP program.

Aside: Several times during the presentation, a speaker mentioned their interest in carbon capture and sequestration. Many of the technologies being pursued for that capability require nearly continuous clean power in massive quantities. Nuclear plants are the leading source for that kind of power. End Aside

The Governor’s plan to test the conversion of coal plants to new nuclear is being supported with a combination of private and federal funding as well as advance work by Wyoming’s legislature, which passed HB 74 with overwhelming bipartisan support, allowing utilities and other power plant owners to replace retiring coal and natural gas electric generation plants with small modular nuclear reactors (SMRs). The bill was signed by the Governor immediately and is now House Enrolled Act 60.

Wyoming will see the development of a first-of-a-kind advanced nuclear power plant that validates the design, construction and operational features of the Natrium technology and enables Wyoming, which currently leads the country in coal exports, to get a lead in the form of energy best suited to replace coal—built right at coal plants, potentially around the world. This conversion path not only reuses some of the physical infrastructure at the coal plant but also takes advantage of the skilled people and supporting community that have been operating that plant.

What makes this announcement truly “game-changing and monumental” in the Governor’s own words, is just how cost-effective and efficient converting a coal plant to advanced nuclear might be. According to the Polish study, retrofitting coal boilers with high-temperature small modular nuclear reactors as a way to decarbonize the plant can lower upfront capital costs by as much as 35% and reduce the levelized cost of electricity by as much as 28% when compared to a greenfield installation.

The analysis looked at the potential within a coal retrofit of re-using the existing assets that are already there. While there will be large differences across plants as to the effective age and useful life condition of major plant components, the study found that “compared to very early retirement, re-using non-coal-related auxiliary buildings and electrical equipment, turbogenerators, cooling water systems, cooling towers, and pumphouses can thus avoid the stranding of up to 40% of the initial investment at a new coal plant.” (See Qvist p. 7)

Additionally, converting to nuclear can maintain the level of energy output from the plant and even exceed it, while eliminating emissions. In contrast, annual output replacement would not be possible using other clean energy options such as biomass, wind, solar or geothermal. (See Qvist p. 11)

In October, 2020, the U.S. Department of Energy (DOE), awarded TerraPower $80 million in initial funding from the Advanced Reactor Demonstration Program (ARDP) to demonstrate the Natrium reactor and energy system with its technology co-developer GE Hitachi Nuclear Energy (GEH) and engineering and construction partner Bechtel. The award will provide TerraPower and its partners with up to $1.6 billion in federal funding during the project to build the reactor, to be operational within five to seven years. TerraPower is also partnering with PacifiCorp and Rocky Mountain Power, subsidiaries of Berkshire Hathaway Energy, Energy Northwest and Duke Energy, which will also provide expertise in the areas of licensing, operations, maintenance, siting and grid needs.

Currently, the DOE is funding a number of promising reactor development projects and President Biden’s recently passed Infrastructure Bill appears to have increased those budget allocations. That is very good news for the climate. According to the Qvist study, some 1,300 GW of coal power units globally could be suitable for retrofitting with advanced nuclear reactors by the 2030s. If large-scale retrofitting were to be implemented starting then, up to 200 billion tons of CO2 emission could be avoided, which equates to nearly six years of total global CO2 emissions, and “would make the prospects of reaching global climate targets far more realistic.” (Qvist p. 33)

For those of us anxiously logging milestones along the way towards our future 100% clean grid, TerraPower’s decision to site its new plant in Wyoming and Wyoming’s embrace of this opportunity—where not that long ago the legislature reacted with an “‘unheard of’ IRP investigation” to push back on PacifiCorp’s 2020 IRP showing the retirement of 20 of 24 coal plants—is remarkable. It is definitely worthwhile keeping an eye on Wyoming, where some entirely miraculous brew of audacious political leadership, climate-fueled economic anxiety and job-seeking technological brinkmanship appears to have paved the way for Wyoming to become a birthplace of 21 century clean energy. As Governor Gordon said, this is truly “game-changing and monumental” news—not just for Wyoming but also for the world. You can view the full announcement below.

This morning I ran across a relatively new blog titled Ecomodernist Mom that deserves to be visited with some regularity.

I feel a bit of a kinship to the publisher; she lives in Florida but loves mountains enough to feature them in her site’s banner. She’s a busy mom struggling with raising kids in suburbia, loves nature, loves humanity, drives an SUV and believes that smart applications of technology offer a way to balance her love of nature with her rejection of the notion that humans are some kind of invasive species.

Here is a quote from the About page of Ecomodernist Mom:

Exploring ways to use our influence as mothers to drive pragmatic, evidence-based solutions for the health of our children and our planet.

This page is not funded by industry or special interest groups. It has been created out of love for my children, frustration at the anti-science movement, and hope that rational voices will eventually be heard in the fight for our planet. – Amy

I’m obviously not a mother, but I have a mother, I live with a mother and have two daughters who are mothers. They are some of my favorite people to hang out with.

Sunniva Rose is a nuclear engineer working on her PhD at the University of Oslo. She is also a talented public speaker who likes to capture her audience’s attention, partially by choosing colors like pink and green to highlight facts about nuclear energy, deaths per terawatt hour, and growth in human population. In Nov 2013, […]

There is a new blog about clean energy with a strong focus on the contributions made by clean nuclear energy. Northwest Clean Energy published its introductory post on September 10, 2014 titled Electricity in the Northwest. The lead blogger is Meredith Angwin, an experienced regional blogger and clean energy expert. The most recent post — […]

Atomic Insights is expanding. I’d like to introduce our newest writer, Evan Twarog. Some of you may recognize his name; in the friendly world of pro-nuclear bloggers, Evan has made a name for himself as a bright young man who started learning the importance of public communications about nuclear energy when he was just 14 […]

An Atomic Insights reader sent me a link to a blog started in July of 2014 titled Nuclear Layperson. The blogger, using the nom de plume of “millysievert” provides the following on her “About” page: Bio: Professional nuclear layperson, a.k.a. Executive Assistant to the World Nuclear Association Director General. Got a C in GCSE Physics. […]

Update: (Posted 08/21/2014 at 7:35) Donn Dears and I have continuing exchanging comments on his blog post about the destruction of nuclear energy. Atomic Insights readers might be intrigued by the way that the experienced, retired GE executive is responding to the “smoking gun” type stories I have shared with him. End Update. I was […]

I just realized that a new Twitter friend — @ActindeAge — had also started a blog named The Actinide Age. The publisher is an Australian working for a manufacturing company that is not related to nuclear energy, but that would benefit if energy was cheaper because of a less constrained supply. You can learn about […]

Lenka Kollar is a fascinating nuclear energy educator with an inherited entrepreneurial spirit. She recently decided to move forward from her job as a nuclear engineer at Argonne National Laboratory to form a consulting company and start a blog titled Nuclear Undone. I had the pleasure of meeting her face-to-face — after several months of […]

Mike Walker has just introduced himself as Another Blogger for Nuclear Energy. He posted his first blog titled “Big, ugly, and scary”, or How Hollywood has Misinformed the Public About Nuclear Power on NuclearStreet.com. Here is how Mike describes his blog and his mission: This blog will focus on how to communicate in an even, […]