As a sworn defender of the Constitution of the United States, I believe in the importance of making decisions at the right level. Our Constitution does a wonderful job of assigning limited powers to the federal government while reserving the remaining powers to states and individuals. There is healthy tension there and room for debate and discussion on the boundaries.

One of the primary strengths of the Constitution and the union of states that it governs is the recognition that state boundaries are not absolute. The drafters recognized that taxation or other inhibitions of commerce among the various states would prevent achieving many of the benefits associated with being part of a larger, unified country. That is why Article 1, Section 8 gives the Congress of the federal government the right to regulate commerce among the various states and to ensure that “duties, imposts and excises” (i. e. taxes imposed by the federal government) are uniform among the states.

I question the constitutionality of the assertion by the Vermont state legislature that they have the right to determine whether or not Vermont Yankee should be issued a certificate of public good. Shouldn’t the people in other states that are affected by the decision be considered part of the public? 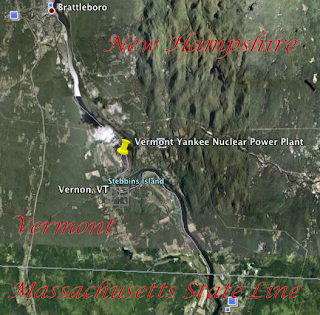 I recognize that there have been some legal cases that stretched the definition of regulating interstate commerce almost to the breaking point and I do not support stretched applications of the clause. I also recognize that electricity generation plant “public good” decisions have often been able to be made at a state level. That is logical for a generation plant in the middle of a large state or under a market construct where there is little interaction between utility systems of neighboring states.

However, Vermont Yankee does not fit the model of a state level decision. According to the Energy Information Agency, electrical power customers in Vermont purchased 5,741,000 megawatt hours of electricity in 2008 while Vermont Yankee produced 4,895,000 megawatt hours. (http://www.eia.doe.gov/cneaf/electricity/epa/epa_sprdshts.html) If the electricity produced at the plant never left the state, it would be supplying 85% of the customer demand in Vermont.

However, the contracted electricity supply arrangements are not limited to the actual location of the generator, so Vermont Yankee only supplies about 1/3 of the power sold by the state utility companies, an average of about 250 MWe out of its 620 MWe capacity. The rest of the power consumed in Vermont comes from Hydro-Quebec and a number of independent power producers who operate sources like wood chip burning steam plants, hydroelectric dams, natural gas fired combined cycle plants, and farm waste methane plants.

That means that Americans outside of Vermont have an economic interest in the continued operation of the plant. Not only does the plant sell 60% of its power outside the state, but about 2/3 of the current employees actually live outside of Vermont. They are not long distance commuters; Vermont Yankee is located on the Connecticut River, which is the border between Vermont and New Hampshire. It is also within a few miles of the Massachusetts state line.

Without demeaning the importance of the responsibility of state and local governments to make decisions that affect their citizens, I think it is important to remember why our founding fathers established a system that ensures that decisions that have a wider than state or local impact are made at a federal level where the interests among several states can be discussed and formally balanced.

It is a bit selfish of Vermont legislators and citizens to think of just their own interests in this matter. Not only is it selfish, but it is a violation of the Constitution for them to assert that right. Almost a year ago, I wrote that a major reason that the legislature passed the law was to attempt to establish a stronger negotiation position for the time after the initial Entergy supply contract expired; nothing has changed to make me change my mind about that underlying motivation.

I wonder how Vermont residents would feel if New Hampshire tried to alter its current sales tax laws so that the current tax free status only applied to New Hampshire citizens? It is good for states to be proud and protective of their prerogatives, but when their needs conflict with those of their neighbors, it is time to elevate the decision to a higher level.