Like all but immediately essential federal government workers in Washington, DC, I have spent the past 4.5 working days at home since the city has been effectively shut down. We have experienced two heavy snowfalls within 48 hours of each other. While shoveling what must have been several tons of heavy, wet snow over a 7 day period, often wearing just a long sleeve tee shirt and blue jeans, I have had a lot of time to think about the weather, the climate, and my future career plans. 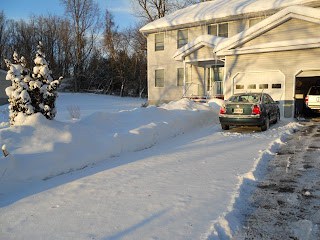 Fortunately, my home has been supplied with reliable electricity throughout the storms. That important fact has meant that I have not had to focus my thoughts on mere survival; I have had the time, warmth and electronic resources needed to read, study and conduct research to support that thinking and provide even more food for thought during the next shoveling episode.

Part of my study effort between periods of clearing my driveway, deck and about 150 feet of street from my driveway to the nearest plowed street has been reading James Hansen’s excellent book titled Storms of my Grandchildren: The Truth About the Coming Climate Catastrophe and Our Last Chance to Save Humanity.

Another part of the study has been a close evaluation of both television and internet weather reports about how the warm, wet air swirling from the Gulf of Mexico has been joining with cold, jet stream air to produce heavy snows for the mid-Atlantic region. Interspersed with the dramatic discussions of all of the snow that is now covering much of the east coast, I have also been watching stories of preparations for the Winter Olympics in Vancouver as the organizers are resorting to trucks and even heavy lift helicopters to move sufficient snow to the local mountains to hold competitions. 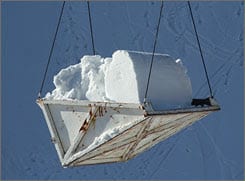 Count me as no longer a skeptic, and no longer patient about our need to take effective action now to reduce the tons of greenhouse gases and other pollutants that humans are dumping into the atmosphere every second of every day. We must stop fouling our own nest, or at least make a dramatic reduction in the rate of fouling.

Please note that I said effective action. I am a trained operations and maintenance technologist who has known since early childhood that reliable electricity is not magic; it comes from a strong network of power lines that are connected to large factories that convert material into heat, use the heat to add energy and pressure to fluids and gas, and use the hot, pressurized gas to spin machines that can create electricity by moving magnets in relation to conductors. I know that some of those steps can be achieved without consuming material – you can move magnets with a lot of falling water and blowing wind, if they are available.

I have also recognized since early childhood that there is a substantial amount of money involved in the process of creating electricity and distributing it to every house and business. Dad used to love showing us parts of the infrastructure involved; I remember touring power plants, transformer sub-stations, hydroelectric dams, and even a coal mine or two. I understand inertia and recognize that infrastructure built over a 50-100 year period does not get replaced quickly.

We do, however, need to begin replacing the heat sources in as many of the large machines at the production end of the transmission wires with emission free heat sources as quickly as possible. In some cases, a new machine may need to be built at the end of the existing transmission lines, in other cases, it may be possible to simply replace the boilers and fuel supply systems with reactors as suggested by Jim Holm at coal2nuclear.com. We also need to work hard to keep the existing emission-free nuclear plants operating; our efforts should be focused where possible on replacing coal and gas plants; once we are making good progress with those and have restored the necessary manufacturing bases we can work on replacing the aging nuclear plants.

That is one of the reasons that I have been getting so passionate recently about the misguided efforts by anti-nuclear activists, coal, and natural gas salesmen to force the early shutdown of reliable, emission-free power generators like Vermont Yankee, Oyster Creek, Ignalina, and the 17 German nuclear plants. When you are certain that dumping thousands of tons per day of CO2 into the atmosphere is a bad idea, you have to get angry when you see already built facilities with plenty of life left in them being shut down for silly or greedy reasons.

It is also the reason that I am getting increasingly frustrated with the current attitude at the very top of the US Nuclear Regulatory Commission. It is good to be cautious and to conduct careful reviews of submitted plant designs; after all, those machines should be operating for 60-100 years and need to be built right the first time. It would not help at all in the effort to shift away from emitting fossil fuel waste if we end up having to tear apart and rebuild new plants like we did some of the existing plants. However, that does not mean that it is time to watch the pennies and keep resources constrained at the agency that is the single point of review through which all new reactor applications have to pass.

After my recent post about the NRC’s Fiscal Year 2011 budget submission, which was $13.3 million LOWER than the FY2010 budget, I exchanged several emails with public affairs and financial representatives at the Commission. They explained to me that the reduction was due to the cancellation of the Yucca Mountain license review and the announced slowdowns in reviews requested by several applicants. That sort of reassured me, but I am still concerned that there are resource constraints that add delays at a time when delay is dangerous to the health of the climate that has enabled human society to flourish.

There is a lot of delay already built into the federal budget process; if tripling the loan guarantee program has the desired effect, the urgency for license reviews by already existing applicants be restored. If loan guarantees actually get awarded and companies like Southern Company, NRG, Constellation and SCANA begin making good progress in their new built processes, it will encourage others to get in line. That is, after all, what the Congress had in mind when they established the program as part of the Energy Policy Act of 2005. Now is a good time to have some contingency funds available at the NRC that will allow them to add resources quickly if there are new applicants. The applicants will be paying the Treasury for the services anyway; a contingency fund would just reduce the curr
ent two year delay between an increase in receipts and an increase in available resources at the NRC.

It is time to take action and show people through success that nuclear plants can be built in a reasonable period of time; they can reduce emission from coal fired power plants by producing reliable power that costs less than power from coal burning; and they can prevent the need to invest enormous resources into extracting and processing energy intensive hydrocarbon sources like oil from shale, liquified natural gas and oil from tar sands. We, the people who understand what fission can do, should bring all hands on deck for a massive effort to improve living standards for everyone while still making a dramatic reduction in fossil fuel emissions.

I found this on my way out the door for my day job and wanted to share it with you. The recognition that small nuclear can overcome some of the issues that have slowed nuclear development and limited its market reach continues to build. The NuScale reactor mentioned in the NPR segment has been priced…

As I perused the net for new material to talk about with you, I found a stark contrast of the type that makes for good article fodder. This week, the US State Department published an article by James Lake, associate laboratory director for nuclear programs at the Idaho National Laboratory, titled The Renaissance of Nuclear…

Every once in a while, I write up an observation or thought that cannot be directly related to the kinds of energy discussions appropriate for Atomic Insights. I occasionally publish those observations on a separate blog called Questioning Attitude that is named after one of the life philosophies that Admiral Rickover encouraged in his nuclear…

It is becoming apparent that the establishment Environmental community has made its bed with the natural gas industry. In the above video, you will see and hear Carl Pope, the long time Executive Director of the Sierra Club and its future Chairman, extolling the virtues of natural gas. He talks about how abundant it is…

There have been several posts on Atomic Insights and on MasterResource.org that have offered contrasting views of the role of government and free markets in developing atomic energy. Jerry Taylor has taken the position that nuclear energy is hopelessly dependent on government subsidies and asserts that is a fundamental weakness with the technology. He has…

When you read this, repeat this mantra to yourself – “no one wants to invest in nuclear energy projects”. At least, that is what people like Amory Lovins and Peter Bradford want you to believe. I know that one day of stock trading for a “penny stock” means very little in the big scheme of…