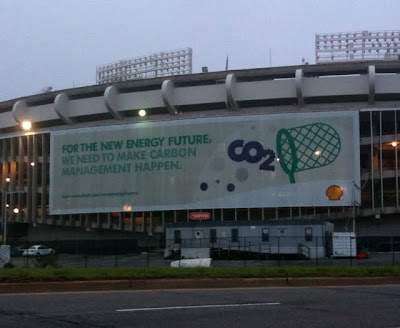 I have been meaning to share something with the world for several months, but never got around to it. Here is the background. Nearly every weekday morning, I exit the Anacostia Freeway onto East Capital Street and cross the Whitney Young Memorial Bridge. At this time of year, my transit into work has me crossing that bridge just before sunrise.

The Robert F. Kennedy Memorial Stadium (RFK to most DC residents) sits at the west end of the bridge. Because of its size and prominent location, it often hosts large temporary advertisements. On a road network where billboards are rare, those signs stand out. That bridge happens to be a heavily traveled route into the city, so the signs get exposed to a lot of eyeballs.

I took the post leading photo of the sign from a pull-off at the west end of the bridge, so the entire sign is visible, but for most of the trip across the bridge, you cannot really read the words on the left side. They are obscured by a line of streetlights down the center divide of the bridge. This billboard has been hanging on the stadium east side for the past several months. Every time I see it, I kind of chuckle and wonder if the people involved in the review and approval of the ad recognize just how honestly they have portrayed the elusive notion of carbon capture and sequestration (CCS). I will leave it at that and hope that you recognize what I am talking about and contribute to a conversation about the sign and CCS technology.

One of the arguments that is often used against new nuclear power plants is that they have the potential to contribute to the spread of nuclear weapons. That charge is debatable, but what is not debatable is the fact that only nuclear reactors can permanently destroy the material that is left over once nuclear weapons…

Alternative Energy Holdings, Inc. has acquired the rights to about 4,000 acres of land on the Snake River in Idaho where it is investigating the possibility of building a new nuclear power plant to serve markets in the Pacific Northwest and California. (See Start-up company pursues plan for nuke plant near Bruneau)Though the site is…

This morning I found a couple of interesting – if ill-informed – posts by Dave Roberts on Gristmill, a blog hosted by Grist Magazine, which is a environmentally focused publication whose views I often share. His entry titled Nuclear: no alternatives? aims to make the case that nuclear power should be our last option; that…

Peter Behr has written a thoughtful piece about the somewhat confusing – to outsiders – legislative battle royale over climate change/energy legislation that is working its way through the US Senate after squeaking through the US House of Representatives. You can find the report on the New York Times web site in the Energy and…

The Vermont Yankee Nuclear Power Plant has been under attack for several years by a concerted, organized effort to force it to shut down. One of frequently employed tactics has been to widely publicize and repeatedly mention any event that puts the plant in a bad light. The tactic of repetition imposes a perception in…

The New York Times has a complete, uncut version of the presidential debate, including even the introductory monologue by Jim Lehrer to the live audience telling them how to behave during the debate. I listened carefully to the whole thing – after all, the selection of a Commander in Chief is important to serving members…