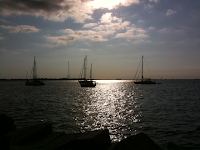 Ajax Eastman has just published a piece on the Baltimore Chronicle, non-profit, internet only news site. Ajax’s article, titled Pulling Back the Curtain on Wind Power is one of the clearest, most concise explanations for why building massive turbines is a dumb idea that is only being done because there are large, misdirected expenditures of taxpayer dollars available for continuous support of the industry.

Ajax uses some comparisons that should resonate with an audience based out of Baltimore, Maryland and its surrounding environs because that area contains one of the world’s highest concentrations of people who sail on boats for enjoyment. Few people better understand how wind behaves than those who regularly try to use it for motive power. People who do not have personal experience in trying to capture the wind for power tend to remember windy days far better than they do the days of peaceful calm when the flags will not even fly. Here is how Ajax starts her article for an audience with a high concentration of people who live and work near the Chesapeake Bay. 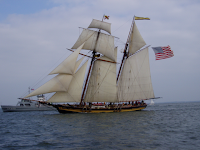 Ever wonder why sailing ships no longer ply the oceans with goods and passengers? It’s a question wind energy advocates might ask themselves. They ignore the fact that the wind doesn’t blow consistently, even though its intermittent nature makes wind an undependable source of power and restricts wind generators from consistently reaching their potential.

She then makes some excellent comparisons between offshore wind turbines – the kind advocated by folks like Paul Gunter of Beyond Nuclear – and onshore nuclear energy plants.

Aside: Gunter, by the way, has absolutely no technical qualifications that have given him any unique insights into power production options. His formal training was as a community organizer. He is being paid to organize against nuclear energy and to grasp at every mirage that can obscure the truth. Update: (August 27, 2011) A friend provided more details about Paul Gunter’s resume. He has known Gunter since 1984. Gunter studied philosophy for a time in college, but dropped out. During the Vietnam War, he counseled draft resisters. For a time, he made his living pruning apple trees. Employment as a professional antinuclear activist is an easier way to earn a living and comes with a travel budget. End Update

For an organizer who wants to discourage the use of nuclear energy by offering a vision of something better, the good thing about fictional descriptions of offshore wind is that most people have no experience at all in being on the open ocean. They might be able to be convinced that the wind is always blowing out there. Fortunately, there are plenty of powerful people in Baltimore who know that is FAR from the truth because they have been out on the ocean and tried to find a breeze when there was no movement to be found. End Aside.

The plant she chooses for comparison is the new unit at Calvert Cliffs, MD that is continuing to progress through the arduous obstacle course that has been established for new nuclear plant development, often under the influence of people who sell machines or fuel that compete against the output of nuclear energy plants. The people in Baltimore are very familiar with that project; it has been in the news for several years as it struggles against a strong headwind of opposition that includes effective bureaucratic opposition by a few key officials at the Office of Management and Budget.

I though Ms. Eastman’s author blurb was interesting: 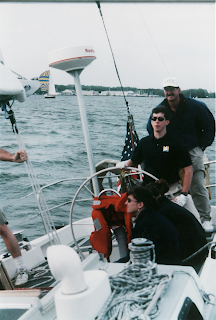 Ajax Eastman has served on the board of the Maryland Environmental Trust, as past President of the Maryland Conservation Council, Co-chairman of the Maryland Wildlands Committee, and on numerous other State boards and commissions. Her love of the natural world began early at a summer camp in Maine where today she teaches nature to young campers.

My love of sailing also started in summer camp, but mine was in Avon Park, Florida. I clearly remember my excitement upon waking up and looking out on the lake to decide what I would do first. If the lake was like a mirror, I would plan to be the first in line for water skiing. If there was some chop, I would think about rowing or canoeing. About once every week or so, there were actually white caps on the lake. Those days, I raced for the sailboats because it was a blast to sail when the wind was strong and quite boring when it was not. I have spent some of the best hours of my life sharing the love of wind power with others – but like most sailors, I know first hand how variable that power source always is.