Tina Gerhardt has published an almost sadly amusing article on the Huffington Post titled Obama’s Climate Action Plan: Nuclear Energy? in which she tries to make the case that President Obama’s climate action plan is an undeserved endorsement of nuclear energy.

Gerhardt is apparently unaware of all of the barriers that the current administration has raised in front of any meaningful role for nuclear energy.

Although less in the headlines than the plan’s position on coal-fired power plants, hydraulic fracturing and the Keystone XL Pipeline, nuclear energy forms a crucial component of President Obama’s climate action plan. And action is moving ahead by leaps and bounds.
…
President Obama’s Climate Action Plan discusses nuclear energy as “Clean Energy Innovation”, which the plan states encompasses “a range of energy technologies, from advanced biofuels and emerging nuclear technologies — including small modular reactors — to clean coal.” To bill nuclear energy as a “clean energy” source is a sleight of hand.

She is apparently unaware of all of the barriers that the current administration has raised in front of any meaningful role for nuclear energy, including the selection of two antinuclear chairmen of the Nuclear Regulatory Commission, the complete abandonment of several decades worth of research and development on used nuclear fuel storage, the moratorium on both new licenses and license extensions based on the lack of waste confidence, and the shrinking budget for new license reviews under the guise of austerity for an agency that sends bills for $274 per bureaucrat hour to the people who get the reviews.

Ms. Gerhart’s article was full of a litany of supposed ills and risks associated with nuclear energy, despite the fact that the power source provides the energy equivalent of 4 million barrels of oil per day of emission free electricity to the US economy at an average cost of about 2 cents per kilowatt hour without having caused a single civilian death from radiation in more than 50 years.

Many nuclear power plants are located near water, either rivers or the ocean, which they draw on for cooling. This factor puts plants at risk from flooding or rising sea levels. For example, the Fort Calhoun power plant, 19 miles north of Omaha, Nebraska, closed in 2011 due to the flooding of the Missouri River.

As Hargraves mentioned, nuclear plants are designed to be safe in the place where they are sited. They can be operated safely everywhere with the right kind of engineering; I can testify that nuclear plants have operated in the deep ocean, under the North Pole, in the middle of deserts, under the ice in Greenland, and in the downtown areas of many port cities around the world.

In my opinion, a world that is currently dumping 35 billion tons of hydrocarbon waste into its share atmosphere every year NEEDS a power source that is clean enough to run inside submarines. Fortunately, mother nature or God gave an abundance of several materials that can perform that amazing feat – uranium, thorium and plutonium.

Genders
Love, Tolerance, Enlightenment
6 hours ago (11:23 PM)
BS. won’t ever be a rooftop solar disasters, or an offshore wind disaster.

Nukes are the most expensive electricity ever created.

At the risk of continuing to waste my time, I fired back with one more response that I think is worth sharing here:

You’re right. Both rooftop solar and offshore wind are fated to be such tiny power sources affecting so few people that occasional deaths from falling will never be classified as a disaster.

There will also never be a reliable power system that can serve the energy needs of 7-9 billion people based on weaklings like rooftop solar or offshore wind.

The real competition in the energy business – coal, oil and natural gas – are certainly capable of being the source of large scale disasters.

If you truly believe that nuclear energy is inherently expensive, there’s nothing I can write to convince you of the errors in your thinking.

However, for all of the readers that are willing to challenge tripe they have been fed by the hydrocarbon establishment, here is information that should stimulate a questioning attitude.

The current market price for a pound of uranium is $40. That lump of metal that you can fit into your hand contains as much potential energy as 30 large tanker trucks full of oil (roughly 900 metric tons) that would cost approximately $660,000 at today’s market price of $105 per barrel ($735 per tonne).

That uranium can release its energy in the form of emission-free heat and be converted into useful power in machines similar to the ones used to convert oil into power.

There is a reason that nuclear power plants are expensive and it has NOTHING to do with the basic technology.

Though it is perhaps completely futile, it is occasionally amusing or interesting to engage in public debates that just might get read by enough people to change a mind or at least encourage thinking. I encourage you all to consider devoting at least a portion of your time to such activity. The people who take the time to comment here are doing a bang-up job of keeping it interesting and making me feel like the effort is a worthwhile investment. Thank you. 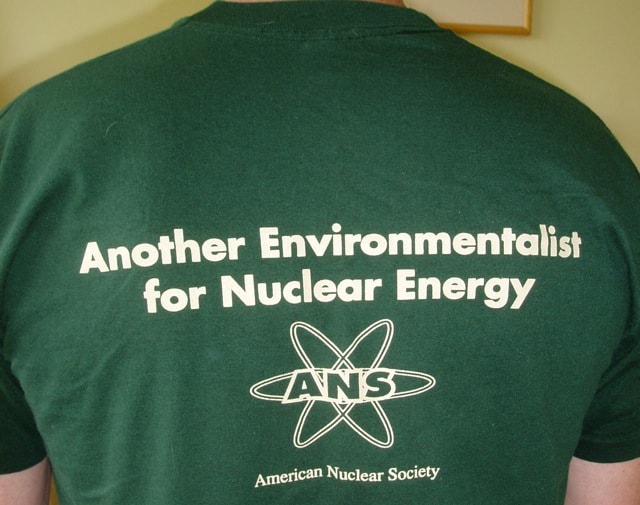 The Breakthrough Institute has published a thought-provoking piece titled Reinventing Libertarianism: Jim Manzi and the New Conservative Case for Innovation It is highly recommended reading. Here is a comment that I left on the piece, focusing on my particular interest area of clean nuclear energy development. Interesting observations. I agree with just about everything other…

There is a pervasive myth claiming that energy is difficult to store. The objective fact is that our creator – or nature if you prefer – figured out how to store massive quantities of useable energy at the very beginning. Aside: Refined electricity storage doesn’t appear to be difficult from a consumer’s point of view. Charging small… 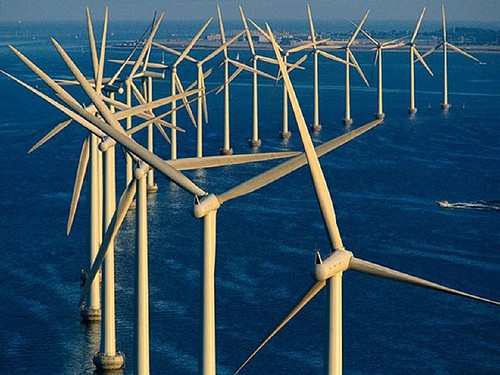 Guest post by Andy Dawson One anti-nuclear argument that’s frequently made is that nuclear is slow to deploy – that renewables can make inroads into carbon production rather faster than can building new nuclear stations. I was recently provoked into taking a look at this, in the context of the UK’s 2020 and 2030 CO2…

The European Wind Energy Association (EWEA) has published a blog titled Nuclear Decommissioning Costs Amount to €66 Billion in UK alone that is a direct response to a post on Foratom titled To subsidise or not to subsidise: that is the question. There seems to be a conflict brewing over energy-related actions that is worth…