I received an email invitation to help The Economist advertise a “two-week long online, Oxford-style debate”. I am happy to oblige, and actually feel kind of honored that Atomic Insights was included in the list of bloggers invited to help such a major magazine capture reader attention.

The debate proposition is: “This house believes that we can solve our energy problems with existing technologies today, without the need for breakthrough innovations.” What do you think? Will the reduction of global energy consumption be enough to sustain current fossil fuel reserves? Or should all efforts be directed toward discovering new technologies that broaden the world’s energy portfolio?

My competitive juices started flowing when I read the following:

Joseph Romm, Pro expert and Senior Fellow at the Centre for American Progress argues that “the world must deploy staggering amounts of low-carbon energy technology as rapidly as possible.” The Con argument made by Peter Meisen, President of Global Energy Network Institute argues that a “design science revolution is required.” Do you agree? Is it more important to support conservation or innovation? Given that both efforts are currently being explored in parallel, where should the center of gravity lie?

After reading the invitation, I sent a quick response back to the person who sent the email. He quickly wrote back.

Here is a copy of my email exchange with The Economist

I will probably post on this tomorrow morning, but I have to give you fair warning – Joseph Romm is a politician, not an energy expert. Though he states that we need to deploy staggering amounts of low carbon energy as rapidly as possible, I know that he strongly opposes the largest source of non carbon energy available – nuclear power. At the same time, he advocates the use of distributed sources of power generation that are essentially diesel engines and combustion gas turbines as long as they include some amount of cogeneration or waste heat reuse.

Hi Rod – Your feedback is duly noted. I’ll bring it up with our Economist team.

Here is a little food for thought as you prepare for the discussion in the next couple of weeks. When I visited the debate site – which has not yet opened up for comments – I noticed the following sponsor message: 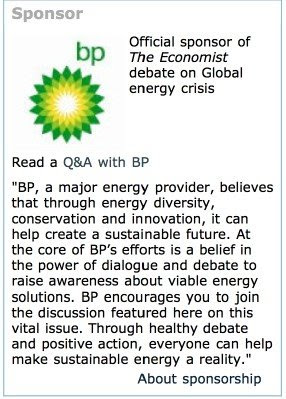 I certainly have nothing against sponsorships, but I do find it an interesting alignment between The Economist – never a big friend of nuclear energy – and BP, a company that I have written about several times in this blog.