Here is the lede from that piece

What did the nuclear power industry get for playing footsie with the “greens” on global warming? A knife in the back, it looks like. The greens now are saying that emission-free nuclear power may actually contribute to climate change.

When I read that and the rest of the commentary, I had a flashback to a talk I heard in 1994 or 1995, given by a University of Virginia professor named Patrick Michaels to a crowd of several hundred members of the American Nuclear Society (ANS). Michaels told the crowd that it was a bad idea to align with the environmental community, essentially the same message in Milloy’s new column.

I think both Michaels and Milloy are dead wrong. The best true friends of nuclear energy are the people that fully recognize that continued dependence on fossil fuels is a hazardous course of action for economic, political, strategic, patriotic and environment reasons.

At the time Michaels spoke to the ANS, many people in the nuclear community had given up on the idea of ever building any new plants in the United States. The Clinton Administration had zeroed out fission technology research and development, no utilities were considering any new construction except natural gas fired turbines, and the only growth industries talked about at ANS meetings were Decommissioning and Decontamination (D&D).

Michaels was at the ANS meeting to participate in a session aimed at discussing ways to reverse that trend. In response to a suggestion from a member in the crowd to educate the public about the fact that nuclear power does not emit any greenhouse gases, Michaels – who had been introduced as a Professor of Environmental Science – strongly discouraged efforts to link climate change with emissions-free nuclear power. He told us that the nuclear industry had tried allying itself with environmentalists like the Sierra Club in its early days – when the club ran a campaign called Atoms, Not Dams – and ended up getting badly burned when those groups shifted their marketing message.

Though I heard that talk more than a dozen years ago, the memory remains very clear since I have thought a lot about the underlying message quite a number of times.

When I read Milloy’s piece, I thought back to that talk and to what I had learned about Professor Michaels after hearing his talk. Michaels turns out to have been one of the most prominent climate change deniers, and to have received a good deal of his funding over the years from the coal and coal burning utility industry in the Appalachians.

It has been a source of continuing frustration to me that many people do not understand that the people who profit the most from anti-nuclear activities are the coal, oil and gas industries. The people least likely to enjoy economic benefits from a strong and rapidly expanding nuclear industry are the people who sell coal, oil and gas and related equipment.

It is true that many mainstream groups who claim to be leaders in the “Environmental” movement fight strongly against nuclear power, but my continuing thesis, which has yet to be proven false, is that at least some of the financial support for those groups comes from the fossil fuel industry. OF COURSE that support is not open, and of course those groups also verbally fight against fossil fuels. However, the statistics do not lie – fossil fuel consumption continues to grow year after year despite much sound and fury. The only places where fossil fuel has been substantially replaced in the energy market are places where fission has been allowed to flourish.

When it comes to environmental effects, there is NO DOUBT in my mind that fission is far superior to fossil fuel combustion, especially when that combustion is in coal fired power plants that do not have to meet current Clean Air Act requirements because of grandfather clauses in the legislation. There is also no doubt in my mind that the real friends of nuclear technology will NEVER be the established energy suppliers, they will be people who seek low energy prices and minimal environmental impact.

Fossil fuel suppliers simply could not compete on a level playing field in many markets. Since they are strong, rich and powerful, they will not give up their dominance readily and they will continue to fight with all of the sneaky tools at their disposal. IMHO, Michaels and Milloy are part of that arsenal.

PS – I was also amused by the irony in the display ads shown on the FoxNews.com site at the time that I read Milloy’s article. I hope that you can see the banner and the right margin ad for “Clean Coal” by americaspower.org and that you get the reason that it amused me to see those ads paired with Milloy’s column. 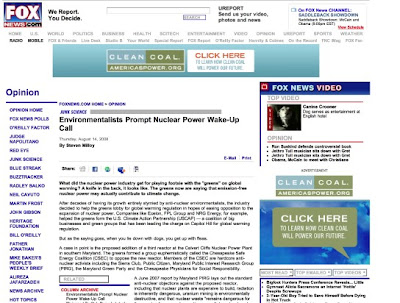