Leslie Dewan and Mark Massie, the co-founders of Transatomic, are striving to make a difference in the world. They want to bring power and light to those who do not have it and they want to show a way to turn “waste” into valuable fuel.

In this Fast Company Freethink production, Dewan shares her inspirations and talks about the scale of the challenges she, Massie and their team are facing.

It’s important for anyone who shares similar goals in life to hear the message that doing important work is “really, really hard” and that the path to success is bound to be littered with failures along the way.

The way people respond to those “failures” – which are more positively thought of as learning experiences – can be the difference between accomplishment and mere existence.

This promotional version of the message is also worth sharing and replaying when needed for encouragement.

The Nuclear Energy Institute (NEI) announced in early September that was starting a new advertising campaign with reimagined creative materials.

Using the general tagline of “Nuclear. Power the Extraordinary” the U.S. nuclear industry’s trade organization will be speaking “to the critical role that nuclear technology plays in our lives. With dramatic visuals, the new campaign captures the far-reaching benefits that nuclear technology brings to air quality, economic vitality, public health and exploration of new worlds.”

The campaign is the work of NEI’s new creative advertising agency of record, Victors & Spoils headquartered in Boulder, CO. The lead creator is Danielle Fuller, an experienced advertising specialist with a unique advantage in creating material for the nuclear energy industry. Her father was a Navy Nuke and also worked as the plant manager at Ft. St. Vrain, the only nuclear power plant ever built in Colorado.

Ms. Fuller told me that she had been thinking about and testing better communications approaches to nuclear energy since high school. She described her excitement about the opportunity to put some of her ideas into practice.

NEI’s decision to put its advertising strategy out for bid did not come easily; one agency had held the NEI account for close to two decades. Change is often uncomfortable.

Since taking over as NEI’s President and CEO last year, Maria Korsnick has emphasized the importance of taking a new approach to maximizing nuclear energy’s “immense potential.” She has stressed the need for the industry to advocate for itself.

“I am truly passionate about the role that nuclear energy can play for our nation and the world. I consider it the unsung hero of our energy mix…My focus is to get nuclear energy recognized as an essential part of the nation’s industrial and electrical infrastructure.”

One way to obtain that recognition is to follow the lead of other successful industries and approach the public directly through creative, carefully conceived advertising.

Ads are an important tool for companies and industries to communicate the value of their products. Even when the products are items that consumers do not purchase directly, or when they are products like electricity that customers purchase without regard to brand names, companies and industries generally recognize that there is value in communicating directly with the public.

Industries of all sizes, shapes, and product lineups depend on ads to inspire, create corporate images, and attract allies.

According to NEI, “The campaign’s paid media strategy is aimed at sharing compelling stories about the positive benefits that nuclear energy brings to human lives on a daily basis. All of the paid media is “audience-first,” taking into consideration the sophistication of the decision-makers’ knowledge about nuclear and how they each consume information across mobile, web and television.”

Ads Aren’t New To NEI, But The Investments And Targets Have Changed

Nuclear energy is rarely the subject of advertising that is accessible in the mainstream media.

In contrast, it’s difficult to avoid messages telling Americans that we have plenty of clean natural gas right under our feet, or that wind and solar energy are bringing clean energy to our homes and businesses at an ever cheaper price.

The oil industry constantly mentions its importance to our modern way of life and regularly brags about its efforts to ensure that we have reliable access to the fuels that we need. Retail gas station signs are as common as fast food restaurant signs.

Coal interests show photos of miners, air video montages of friendly people in mining communities, and strives to ensure the public understands that coal is responsible for a large portion of its electrical power supply. Who hasn’t seen the coal industry’s marketing image of a black rock with a power cord?

Corporate decision makers at nuclear products and services companies typically shun the mainstream media and target their marketing budgets on industry publications and events, aiming to reach customers that might directly purchase their unique offerings.

The electric utility companies that own and operate nuclear power plants stopped spending money to promote their product sometime in the early 1970s. Some believe there is no need to encourage people to use electricity. Some even react with horror at the idea, believing firmly that energy conservation is the only moral path available.

If a utility company advertises to the public at all, it is often to actively discourage customers from purchasing more electricity. Some have told me that they focus on encouraging reduced electricity use because that is the only kind of advertising that their regulators allow them to run.

(The more accurate statement is that public service regulators generally will not allow utilities to recover the costs of advertising from their customers; they do not object to utilities using part of their profit margin to market their products and services.)

Industry leaders seem to begin to understand the need to advertise a bit better when they realize they are losing customers and sales as a result of skillful promotions of propane, natural gas or even oil for appliances and space heating.

Though the creative materials prepared for the “Nuclear. Power the Extraordinary” are varied enough to target a wide range of audiences, the NEI does not have a budget for air time or print space that is even on the same scale as some of its primary competitors like the American Petroleum Institute or the American Gas Association.

The ads will initially be heard and seen in key state battle grounds like Pennsylvania, Ohio and New York as well as in the Washington, DC area.

It might be worthwhile, however, for companies and organizations that agree with NEI’s messages to engage in a “best practices” exercise of contacting NEI to discuss using the already created materials in a large variety of markets.

Atomic Insights does not run ads. We encourage everyone to read our content and discuss it in a moderated forum. Generous readers like you help to defray costs and provide sustaining income.

Michael Shellenberger, the director of Environmental Progress, recently gave a talk at Cal Poly titled How Fear of Nuclear Ends. As usual, Michael did a terrific job of presenting the talk and provides excellent graphics in support of his primary discussion points. There is, not surprisingly, more to the story he told. After all, he […]

Judy Woodruff introduced a “must see” segment on PBS’s Newshour last night. JUDY WOODRUFF: Now: why some engineers and investors are making big bets to develop a new generation of nuclear reactors. Miles O’Brien has the story. It was a co-production with our friends at PBS “NOVA” tied to the January 11 documentary “The Nuclear […] 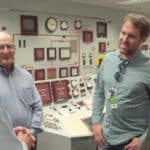 Advanced nuclear reactor development is so vibrant, interesting and important that it has attracted a filmmaking team. The filmmakers, led by David Schumacher and Derek Wiesenhahn, are telling a story about some of the projects that aim to produce new ways to use fission to power society. The projects have been created by dedicated, interesting […]

The California State Lands Commission meeting on June 28, 2016 included a number of articulate, knowledgable, rational and emotional talks by people who took time to attend the meeting and to deliver their public comments. Some had carefully prepared remarks, others spoke directly from their hearts. Some had a prop or a graph, others relied […]

Third Way bills itself as a centrist think tank that is not satisfied with just thinking; they take action that gets results. Wednesday’s (Jan 27, 2016) Advanced Nuclear Summit and Showcase provided an excellent example of Third Way’s ability to seek common ground among people from both major political parties in the United States. The […]

In August 2015, I had the distinct pleasure of introducing Rachel Pritzker to Atomic Insights readers and Atomic Show listeners with Atomic Show #241 – Rachel Pritzker, philanthropic problem solver. Since that show, Rachel and I have met face to face, exchanged several emails, participated on the same conference calls, and interacted via Twitter. I […]

One of the highlights of the recent Advanced Nuclear Summit hosted in Washington, DC by Third Way was an inspirational talk by Senator Cory Booker (D-NJ) Here is a partial transcript, starting after Booker’s folksy story to set the talk’s tone. Here in this realm, we in government have to start acting boldly and let […]

Meredith Angwin, who blogs at Yes Vermont Yankee and Northwest Clean Energy, was recently invited to talk with Pat McDonald on her television show called Vote for Vermont: Listening Beyond the Sound Bites. Angwin and McDonald covered a number of topics during the conversation. Meredith explained how we safely store used nuclear fuel, why some […]

Nuclear4Climate posted the below video on their YouTube channel yesterday. It features Kirsty Gogan, the Executive Director and one of three cofounders of the U.K. based civil society group Energy for Humanity. Though there is a small issue with sound quality, I think you’ll agree that Kirsty makes a strong case for nuclear energy as […]