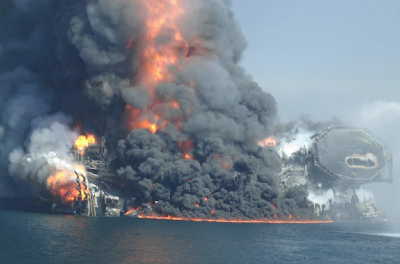 There is a detectable effort by people who are opposed to the development of nuclear energy to try to link environmental concerns related to the Deepwater Horizon off-shore oil well explosion and continued large scale Gulf of Mexico pollution with the effects of well publicized nuclear energy related accidents and incidents like Three Mile Island and tritium leaks from operating nuclear power plants.

This effort appears to be aimed at playing on the logical revulsion to the massively damaging and deadly effect of taking the risk of drilling for explosive, high pressure oil and gas in 5,000 feet of water more than 40 miles away from land and somehow linking that reaction to the much more manageable risk of producing reliable heat and electricity from inside an engineered nuclear reactor that employs a carefully reviewed and licensed defense-in-depth approach to limiting potential environmental impact.

That linkage can only be effectively made in the minds of people who have no concept of chemistry, material properties, radiation health effects, the effects of sea pressure, the limitations of remote controlled equipment, and the use of tested compared to untested safety equipment. There really is no comparison at all – it is possible to quantify the risks and potential effects and plot them on a graph.

The risk of an accident or incident whose environmental effects cannot be repaired or mitigated can be seen by history. Little material left containment building at TMI, even though the plant suffered one of the worst possible accidents and melted 20-30% of the core material. So far, no one has figured out how to effectively stop the oil that is gushing from the hole that the crew on Deepwater Horizon drilled into the ocean bottom, even though the explosion happened on April 20, almost a full month ago.

No one was hurt or killed at TMI, not even any birds. Eleven human beings perished almost immediately on the Deepwater Horizon drilling platform, dozens more were injured enough to require hospitalization. Who knows how many fish, birds and ocean dwelling mammals will be killed by exposure to the leaking crude oil? TMI’s effects would barely be visible above the zero line; the line representing the effects of Deepwater Horizon would be quite tall and not yet complete.

On May 13, 2010, Democracy Now hosted a discussion between Joe Romm of Climate Progress and Phil Radford of Greenpeace. Here is a quote that demonstrates how Greenpeace and other anti-nuclear groups are trying to impress the linkage between the high tech nuclear world and the high tech world of deep water off shore drilling.

Radford – I think the bill basically just needs to get stronger. The problems are the pollution isn’t cut enough. While the oil spill disaster did take some of the oil provisions out, there are still incentives for states to drill for oil. And then, another crisis just happened. In New Jersey, radioactive tritium just leaked into the aquifer from a nuclear plant. It’s getting in people’s groundwater. Hopefully that disaster can show people that we’re really gambling with our children’s future when we’re giving tens of billions of dollars to nuclear energy in this bill.

Joe Romm, a guy who generally claims that he is not opposed to nuclear energy, stated that the source of his skepticism that nuclear will make much difference anyway was a concern about cost.

Romm – Well, anyone who reads my blog “Climate Progress” knows that I don’t think nuclear power is going to be one of the major solutions going forward. It’s just too darn expensive. There are a lot of risks to it, too. But right now, it is just staggeringly expensive. There are, you know, I think, pointless subsidies in this bill for about a dozen new plants. I don’t know if we’ll ever build those plants, because they’re so expensive.

Joe has written about the discussion on his Climate Progress blog under the heading of My interview on Diane Rehm: Plus my ‘debate’ with Greenpeace on Senate climate bill. I could not pass up the opportunity provided by that blog to make a comment – which is not possible on the Democracy Now site. Here is that comment, which may or may not appear after moderation:

It boggles my mind to hear and read about people who point to fossil fuel related disasters like the clean natural gas explosion on the Deepwater Horizon drilling rig as a reason for being reluctant to develop nuclear energy.

There is an amazing difference in the scale of the environmental effect of releasing a few curies of noble gases from a containment building at Three Mile Island or leaking a bit of tritium into the ground water underneath a licensed and operating industrial facility like the Oyster Creek Nuclear Power Station (by the way, the leaks actually occurred and were fixed more than a year ago) and dumping hundreds of thousands of gallons of petroleum into the Gulf of Mexico every day for an indefinite and continuing period of time.

(Aside: Did you know that “clean natural gas” explosions have almost as many people in the eastern United States in 2010 as the explosion and fire at Chernobyl did – as long as you include the delayed deaths at Chernobyl for the 18 years after the accident? Detailed derivation and sources available at Motives for Molding Public Opinion On Climate Change – Al Gore Contrasted With Fossil Fuel Interests )

Vermont Yankee, Indian Point, Oyster Creek are all under coordinated attack BECAUSE they produce large quantities of reliable power that reduce our need to burn (and purchase) natural gas. The existence of those nuclear plants harms the pocketbooks of some of the leading funders of the “environmental” movement, including Chesapeake Energy (the checkbook behind the Clean Skies Foundation), Ted Turner, a man who owns land that supports at least 10,000 coal bed methane wells, and T. Boone Pickens, a man whose BP Capital has billions invested in natural gas production.

Nuclear energy is clean enough to operate inside sealed submarines. Put it on a playing field with standards that are remotely similar to the standards applied to its competitors in the fossil fuel industry and you will find that the cost of construction and plant operation will drop with increasing experience, just like the cost of nearly every manufactured product in human history.

The Chinese, Russians, Indians, French, South Koreans, Finns, Brazilians, Italians, British, Japanese, Vietnamese, Jordanians, and citizens of the UAE recognize the value of nuclear energy and will soon be capturing increasing market share of all energy intensive manufacturing in the world. The US, if it pays attention to thought “leaders” li
ke Romm, will be left in the dustbin of history as an energy poor nation that cannot engineer its way out of lawyer imposed poverty.