This article originally appeared in issue number 358 of Fuel Cycle Week dated January 6, 2010. It is reprinted here with permission.

To Americans the trade name for the China Ocean Shipping Co. sounds like the big-box competitor to Sam’s Club. But COSCO may soon become a household word in the nuclear industry, now that Wei Jaifu, its president and CEO, has called on international shipping organizations to investigate the use of nuclear energy for powering merchant ships.

Wei has indicated that his company, now more accurately known as China Ocean Shipping Group, will take the lead in studying the application of nuclear, and in fact has already begun discussing it with the China National Nuclear Corp. Nuclear propulsion is common in military fleets, but questions remain about the use of nuclear in commercial shipping.

Still, if the study shows the technology is viable for commerce, shipping companies could develop into an important new consumer of uranium. That could have major implications for the global uranium market.

Not everyone is onboard, however. Peter Swift, the managing director of Intertanko, a professional association of independent tanker owners, has expressed reservations about the public acceptability of nuclear propulsion and the challenge of developing a corps of trained nuclear engineers able to man the ships. Each ship would require at least five qualified nuclear operators, which means it would take about half a million operators to run a global fleet of 100,000 ships large enough to operate profitably with nuclear energy.

On the other hand, Intertanko’s website reveals a possible source of antinuclear bias. Tankers ensure that “the oil that keeps the world turning is shipped safely, responsibly and competitively,” it points out. Clearly the group looks to the trade and transport of fossil fuel for its bread and butter—and may be reluctant to switch to a different power source.

The idea of commercial nuclear shipping is not exactly new. In the 1955 President Dwight Eisenhower proposed the construction of a nuclear-powered cargo-passenger ship as an ambassador vessel for his “Atoms for Peace” initiative.

The result was Nuclear Ship Savannah, which was to become the first and only U.S. attempt to build a commercial nuclear ship. It cost $49.6 million, including a $28.3 million Babcock & Wilcox-made nuclear reactor, and First Lady Mamie Eisenhower christened her on July 21, 1959. She was, and still is, a beautiful piece of naval architecture with lines more reminiscent of a luxury yacht than a commercial vessel. She still resides in the Port of Baltimore. 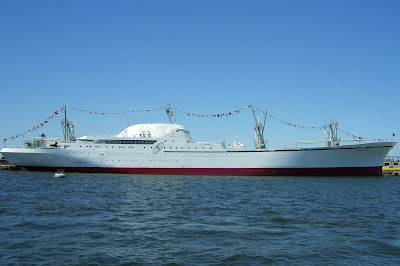 In her salad days NS Savannah hosted dignitaries in her luxury cabins, regaling them with a swimming pool, library, banquet hall with dance floor—plus an excellent galley. Almost as an afterthought, she had a few bulk-cargo holds with loading cranes set up more to look good than to expedite loading.

But by the late 1960s her show vessel days were over, and as a cargo ship she was a bust. Apart from her limited capacity, her operating budget required of the maintenance of a shore-based support infrastructure that was idle most of the time. Plus in those days her fossil-fueled competitors were also able to purchase oil for $2-3 per barrel, far less than what nuclear fuel cost.

But today the NS Savannah offers an instructive paradigm for determining the potential fuel demand of a fleet of nuclear ships.

In her day the standard nuclear fuel load would last a bit longer than two years at full power. That would be equivalent to about three years in typical trade use. Her nuclear core used about 6,800 kilograms of 4.5% enriched uranium in a 15 MWe steam engine. But at the much higher burnup rate of modern light-water fuel, a 6,800-kilogram fuel load in a 15 MWe steam engine would last an astounding 12 years.

If just 20% of the world’s 100,000 commercial ships were to convert to nuclear, they would require an aggregate 1.2 million tU and 992 million SWU for each to have an initial 6,800- kilogram load of fuel. That means if manufacturers were to build a fleet of 20,000 ships over a 12-year period (1,667 ships per year), they would need to order about 100,000 tU and 82 million SWU annually—more than doubling today’s uranium demand and increasing the need for enrichment by 240%.

The market value of that much activity would depend on the settled prices of uranium and enrichment services. At a price of $135 per SWU, the annual value of the enrichment services would be more than $11 billion. At various prices for uranium ($50, $100, and $150 per pound) the natural uranium market would be worth $11, $22, or $33 billion.

Considering the cost projections of Babcock & Wilcox for its new 125-MWe mPower reactor, a smaller, Savannah-sized power plant would cost roughly $5,000-$10,000 per kilowatt.

This would replace a $40-million 15-MWe diesel engine, whichwould burn bunker fuel oil costing about $15,000 to $20,000 per day at today’s prices. After 12 years of operating at a 67% capacity factor, that large diesel engine would consume approximately $75-$100 million in fuel oil and need to be refueled at least 20 times each year.

Of course, the diesel ship fuel bill would vary with market prices and could not be locked in with long-term contracts.

Bloomberg Businessweek April 27, 2010 – Lubricating Bubbles May Help Branson War on Shipping Pollution. This article includes some additional discussion about companies that are considering the use of nuclear propulsion.