I have done some reformatting of the graph of non combustion energy sources in the US during the period of 1949-2006. Following the suggestion of Kirk Sorensen, I put wind, solarPV and geothermal on the bottom of the chart in an attempt to better illustrate their growth.

Feedback is welcome. Source of the data is Table 1.3 of the Energy Information Agency’s Annual Energy Review, posted at http://www.eia.doe.gov/emeu/aer/overview.html on June 23, 2008. 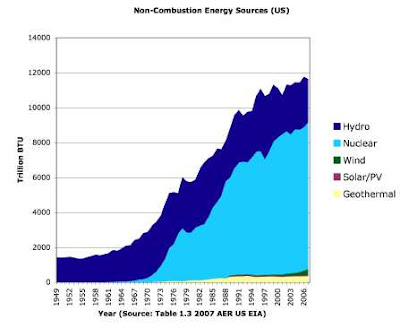 Update: (Posted at 4:40 am on Friday July 4, 2008) This graph generated a useful discussion about the units and the method of comparison between various energy sources. I learned that the Energy Information Agency table used to create the chart makes the assumption that electricity generation has an efficiency of about 33% (10,400 BTU per kilowatt hour).

Here is a slightly modified version of the graph with a better legend and cleaner text.

A reader requested a version of the above with the energy sources ordered from smallest to largest (bottom to top). Here is the result for anyone to use under creative commons (full attribution). (Snarky note: there really is a tiny bit of purple down in the bottom right corner of the graph that represents the amount of solar thermal and solar PV energy calculated by the EIA and adjusted by multiplying the electricity by a factor of 3.)

The second day of the Platts Small Modular Reactor meeting was held on June 29, 2010. The meeting started with Don Hoffman’s summary of the previous day’s discussions. He spoke about having taken more than 20 pages of notes with questions, answers and action items. Don is the President and CEO of Excel Services Corporation,…

I hope that the below copy is readable, but if not, you might try clicking on it to get access to a larger version. It came from the December 8, 2008 issue of Fortune Magazine. Just in case you cannot read the copy, here it is: “Tackling climate change and providing fuel for a growing…

I just read a BBC Science News article titled Chernobyl birds are small brained. The headline writer succeeded in his job – he attracted me to click on the link and read the article. The person who shared the link on Twitter also succeeded, by copying the link and headline into a tweet, he pointed…

I found a couple of articles in recent days rather interesting when mashed up. One article was published in the Wall Street Journal last week – sorry, but I have lost the paper copy and cannot reference it directly. The article talked about the difference in tone of muti-national oil executives when they are talking…

GE, Toshiba and Hitachi have a long standing joint venture called Global Nuclear Fuel that is headquartered in Wilmington, North Carolina. Toshiba’s recent purchase of Westinghouse, GE’s arch nemesis in the electric power business is causing GE to reevaluate its partnership arrangements. :NOTE: The rivalry between General Electric and Westinghouse dates back more than 100…

The US Nuclear Regulatory Commission has posted a Policy Issue Information document dated March 28, 2010 titled POTENTIAL POLICY, LICENSING, AND KEY TECHNICAL ISSUES FOR SMALL MODULAR NUCLEAR REACTOR DESIGNS. The document number is SECY-10-0034. It is a fairly typical redundant, bureaucratically phrased work, but it contains a number of important statements, planned processes, and…