The Pacific Northwest is an area of the country where the electrical power supply has some common attributes with the power supply system serving the Scandinavian countries (Denmark, Sweden, Norway). There is a large installed base of hydroelectric power, a small amount of nuclear power, and some variable fossil power. As is the case in Scandinavia, the Pacific Northwest is also the home to a growing industrial wind power capacity.

In the Pacific Northwest, Bonneville Power Administration (BPA) operates the regional power grid. BPA is a federal agency established during the Great Depression to own and operate the dam system that the federal government built on the Columbia River to produce jobs, clean power, reliable power, recreational opportunities, and economic development. In addition to the mighty river, the area has some ridges where there are reasonably steady winds driven by Pacific weather patterns and elevation differences.

The availability of both wind resources and an installed base of hydroelectric dams provides a power production opportunity that attracts a certain amount of interest from developers. Dam operators can save up their water behind the dams when the wind is blowing; they can then throttle up their water turbines rapidly to make up for any drop in wind velocity. A similar fortunate combination has allowed tiny Denmark to become one of the world’s leading producers of wind power – it uses its neighbors’ hydroelectric reservoirs as a natural buffer for the variability of its wind turbine output. Partially based on the often touted experience in Denmark, there has been a rapid boom in large wind turbine construction in the Bonneville Power Administration service territory.

There are now more than 2700 MW of wind turbine electrical production capacity on the ridges near the Columbia River system. The operating experience is not working out quite as well as the promoters described. The Seattle Times Local Section published a balanced and informative article describing the challenges of keeping the power system running in an article titled As wind power booms, so do the challenges. The summary of the article under the title provides a hint of what is to come:

The revolution happening along the Columbia River is full of promise. But wind power is fickle, and keeping our energy system running smoothly has become “the great economic and engineering challenge of our time.”

As a former operating engineer who believes that a good engineer is a lazy cheapskate, I could not help but cringe when I read the following quote:

It is the great economic and engineering challenge of our time, at least in this industry, to try to figure out how to make all this stuff work,” said Steve Wright, administrator of the Bonneville Power Administration (BPA). “It’s a thrilling ride. But if something goes wrong, we’re the folks that people are going to look at. So we take this very seriously. 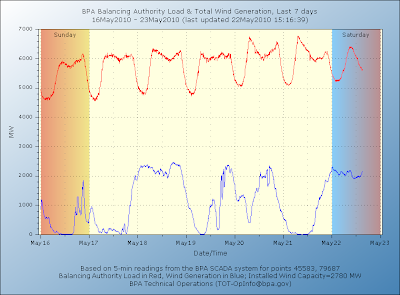 Government appointed administrators might enjoy thrilling rides, but people who are employed to operate electrical power systems generally prefer boring jobs where trouble can be predicted, mitigated and avoided. Their job is to provide electricity at a constant voltage and a frequency solid enough to power accurate clocks. They (and there was a time when I could say “we”) do not actually enjoy the challenge of figuring out ways to produce steady power with wildly gyrating generators. I remember very clearly the feeling in my stomach when I had to watch my electrical operator synchronize with a diesel generator whose intake was being opened and closed by waves washing over the snorkel mast.

There is a lot of good, thought provoking information in the article. Please read it carefully and then ask yourself – why is it that federal taxpayers are putting in 20-30% of the initial cost of these expensive and ugly systems that are supposed to be producing power, but are actually producing some serious headaches? Why are states mandating their installation, even when the power is not needed or even wanted by the grid operators? Notice just how rapid some of the power ramps – both up and down – are in the wind data published by the BPA. Think hard about how much notice the operator might have received before having to respond.