I wrote yesterday about the press conference announcing the release of Dr. Mark Cooper’s paper titled Policy Challenges of Nuclear Reactor Construction: Cost Escalation and Crowding Out Alternatives. Though I strongly disagree with the conclusions, I believe that the paper is worth reading because it can provide both cautionary information and some indications for ways to improve on past history.

Unlike Dr. Cooper, I am unabashedly in favor of the use of atomic fission as a source of reliable, emission free, inexpensive heat. Using fission to replace fossil fuel combustion can provide growing numbers of the world’s human population with low cost, reliable, clean energy.

That said, I also recognize that Dr. Cooper has done a reasonably accurate job of presenting the actual numbers associated with building the world’s current stock of nuclear power plants. The nuclear industry did experience a rather dramatic escalation in construction costs well in excess of the rate of inflation. It did not achieve the predicted economies of scale in construction costs; bigger plants tended to cost even more per kilowatt of initial capacity than the early, smaller units. The last plants finished in both the US and France tended to be far more expensive and took far longer than initially predicted. 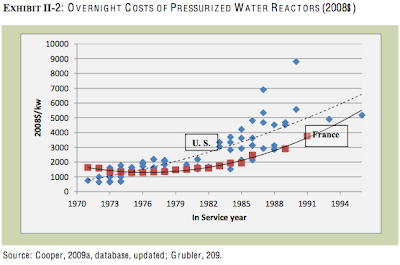 One of my issues with using the historical analysis that Dr. Cooper applied for future predictions is that it is based on an assumption that the participants in the next build cycle will make the same mistakes again. That assumption supposes that the people involved are less able to learn lessons than “independent” analysts like Dr. Cooper.

I have been around nukes for the past 30 years; people can apply many labels to them, but it would be wrong to say they refuse to learn lessons from past mistakes. There are few groups in the world who spend more time analyzing the past and trying to glean lessons for future actions – in fact, nukes are more often guilty of paralysis by analysis than of trying to move forward without learning lessons.

For example, Cooper identified a cost trend that went in a different direction than most of the other cost trends he found.

Historical data shows a clear relationship between multi-unit sites and costs in the U.S., with second and third units costing substantially less. However, this has the impact of making the reactor projects very large and raises concerns about excess capacity, especially given the economic slowdown and dramatic change in household wealth resulting from the financial meltdown.
(Cooper Policy Challenges Pg. 24)

If Cooper did not already have an anti-nuclear agenda, he might have tried to do some additional investigation to find out if the unit cost reduction trend continued with even more than three units at the same site. Though there are no US facilities with more than three units, there are examples in France and Canada with as many as eight units on a single site. 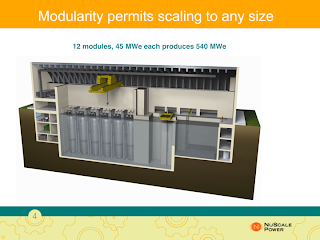 Though Cooper was unwilling to recognize the implication of his positive finding, knowledge of the multi-unit effect gives some encouragement for the kinds of large, multi-unit projects that Westinghouse, Kepco and Rosatom are developing around the world. It also provides encouraging reinforcement for the multi-unit nuclear plants that NuScale and B & W are proposing to build with many more units per site using their smaller modules.

The key reason why multi-unit construction showed cost improvement for later models is that the specific crew that learned on the first unit was able to turn around and apply those lessons to the second unit. Learning curve theory would show a potential for continuing improvement as the number of units built by the same team increases. Normally, the curve is based on a certain percentage increase as the cumulative experience doubles. 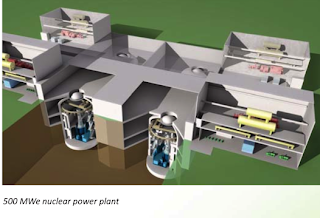 Another cost trend that Cooper identified was that there was a substantial difference in the rate of cost growth between various prime contracting firms.

However, there is a distinction between the companies. Bechtel built a large number and had lower costs, but even for Bechtel, there was a steady, moderate increase in costs. Two other constructors had low and moderately rising costs that paralleled Bechtel (Duke and UE&C)
(Cooper Policy Challenges Pg. 20)

In today’s nuclear industry, a result like that would lead to a number of efforts to share best practices and learn as much as possible about the differences in project management so that all constructors could move towards achieving results similar to the best performers. Of course, the energy business is a competitive one. What really might happen would be for a larger number of customers to gravitate towards the companies with the better records of performance. That movement would have the same effect overall – the cost growth would be far lower.

There are probably many reasons why the final plants in the first building cycle cost so much and took so long. One of the reasons that is not often discussed is a purely logical, human group behavior of working to hang on to a good job as long as possible. The people who were building those units could read the writing on the wall; there were no new projects for them to move to. Some were working on new skills and preparing to transition to operational jobs or other types of construction, others may have been nearing a planned retirement, and still others may have had no real plans at all for what they would do when the plant construction ended and they no longer had any work to do.

That natural group behavior would have resulted in many different ways to slow down progress. It would have been complicated by the fact that nuclear co
nstruction jobs were good paying positions that often involved some decent perks. I have talked to a number of people who participated in those building programs – they have shared stories of full of useful information about situations that contributed to cost escalation.

One story in particular I remember was from a former highly respected nuclear welder who owned a jewelry store in the Florida town where I lived in the late 1990s. He once told me about an assignment where he was called onto a site for a particular critical weld. Because it was difficult for the project manager to predict exactly when his services would be needed, he asked him to be on site a few days before the job was tentatively scheduled to take place. He spent several days in a hotel room collecting per diem and eating nice meals while he was waiting.

When the project needed his services, he worked as many hours as possible before taking a break for necessary sleep. He turned back around as quickly as possible and worked some more until the job was done. (That process gave him a pretty healthy boost with overtime pay, but the project managers were happy to pay because of the value of shaving time when working on a project where the completed plant’s revenue would be a $1-2 million per day.)

Once he finished the job, he was asked to hang around until it was tested, which took several days. He told me that assignment was not unique and that jobs like that could net him the equivalent of a month’s pay in just a week or two with only a couple of days worth of actual work. He told me that he knew some welders whose work did not pass the first or second retest – sometimes because they knew exactly what to do to fix the welds but they liked the lifestyle of being on per diem as long as possible.

My “take away” from hearing the stories I heard about the final stages of the first Atomic Age was – well, let’s not do that again. In my opinion, the very best way to avoid situations where people do not do their best because they do not want their job to end is to establish and maintain a sustainable industry where there is never a time when good people look forward and see no future for their skills. There is plenty of demand for reliable, clean energy in the world to make sure that highly trained people always have work to do building new power plants.